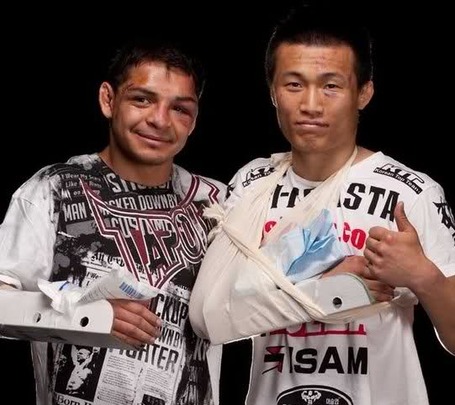 Gritty featherweight brawlers Leonard Garcia and Chan Sung Jung will kick things off on the live special for the cable television network.

For Jung, this will be a chance at redemption as he fought Garcia before at WEC 48 where the "Bad Boy" won a controversial split decision. Now training at Team Alpha Male, the South Korean is looking to not only erase the loss to Garcia, but also looking to get back on track after a two-fight losing skid.

As for Garcia, he was originally slated to have a rematch with Nam Phan (another fight Garcia won controversially) but Phan had to pull out due to an injury on just 10 days notice. While a highly exciting fighter, the Albuquerque, New Mexico native has won most of his fights as of late via some form of controversial decision.

Will "The Korean Zombie" be able to set the record straight? Or will Garcia get the victory again in a more convincing fashion?

Check out our breakdown of Leonard Garcia vs. Chan Sung Jung 2 after the jump:

How he got here: The South Korean fighter is mostly known for his ferocious intensity and a go-for-broke style of striking. However, Jung is far more than just a striker, as he has won six of his fights via submission and holds a background in Sambo. "The Korean Zombie" worked his way up overseas by winning the Pancrase Neo-Blood tournament and defeating Japanese sensation Michihiro Omigawa. Since losing to Garcia, Jung faced another set back at the hands of defeat once again when George Roop knocked him out with a devastating head kick.

How he gets it done: While Jung certainly got the better of a lot of the striking exchanges in their first fight; Garcia was only on defense the entire time the South Korean brought the fight to the mat. What Jung needs to do is use his striking just enough so that Garcia goes back to over-committing with his punches and then drag Garcia to the mat and work his submission game. The more the fight stays on the feet, the more judges tend to score the fight for "Bad Boy" -- even if he lost, so Jung will need to work for the finish via submission or TKO once the fight hits the canvas.

How he got here: The Greg Jackson protégé had a rough outing in his first fight in the UFC when he lost to Roger Huerta in a highly entertaining battle. Since the loss to "El Matador," Garcia has been in many exciting bouts and has earned "fight of the night" honors on three separate occasions and the first bout with Jung was considered a "fight of the year" candidate for 2010. Garcia does not have a technically proficient style of fighting, but his heart and willingness to come forward and exchange has consistently given him the spotlight.

How he gets it done: For Garcia, he needs to keep it simple and utilize what brought him to the dance, his willingness to stand and exchange. With Garcia constantly coming forward and pressing the action, the judges tend to favor his style even if he can't get the big knock out. "Bad Boy" needs to make sure and stuff all the takedowns of Jung and land first because if he can't and takes a step backward in this fight, Jung may get the victory.

Fight "X Factor:" Jung's training at Team Alpha Male may make the difference in this fight as the team has a tremendous track record in the sport. With the great group of guys in the gym the South Korean has to work with such as Urijah Faber, Joseph Benavidez, and Chad Mendes, Jung will be able to improve as a fighter. While Garcia does train at Jackson's, Garcia tends to fight the same all the time and the changes in Jung's game may make the difference.

Bottom Line: It's very hard to see a Leonard Garcia or a "Korean Zombie" fight turn into a boring match. Both fighters have something to prove and are looking to take the next step up in an incredibly stacked UFC featherweight division. Fans can expect and should expect another classic from the two featherweights and no matter what happens, the fans will likely win with this fight. As for who gets it done, I've got to go with "The Korean Zombie" as I think he'll fight much smarter this time around and gut out a hard fought decision victory.

Who do you think will win the rematch? Tell us here!

Who will win the rematch at UFC Fight Night 24?