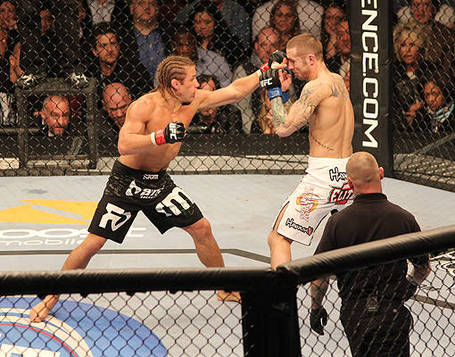 Two former WEC champions collided at UFC 128: "Jones vs. Shogun" when Urijah Faber pulled off a unanimous decision victory over Eddie Wineland in the co-main event of the evening.

If you listened to the fans, this was supposed to be an easy night for "The California Kid" on his way to a title shot against division champion Dominick Cruz.

It was anything but that.

Faber had a rather rough go of it throughout the fight, not exactly impressing in his Octagon debut. That said, he was able to gut out the victory to set up a date with his nemesis.

Here's how it looked:

The former WEC featherweight champion opened up round one by immediately initiating the clinch. His gameplan appeared to revolve around taking his opponent down, but he surely didn't expect Wineland to show up with such great wrestling.

To the surprise of many, it was Wineland who was able to out muscle Faber. The Indiana native even managed to score a big takedown from a go-behind wristlock.

Faber uncharacteristically seemed frustrated in the fight with his takedowns constantly being defended, but it wasn't the first time, and won't be the last, that a gameplan hasn't worked to perfection.

In round two, Faber was finally able to get the takedown and as soon as "The California Kid" was able to get Wineland on his back, he was able to keep him there and land several elbows in Wineland's closed guard. And just for good measure, he even picked him up and slammed him -- twice.

With the first two rounds split evenly, one of the former champions had to step up and make a statement to seal the deal. In this case it was the "Alpha Male."

Wineland and Faber both seemed a bit timid through the first part of the third frame, but Faber would eventually connect with some solid punches. He would settle into a nice rhythm and close the fight strong with another takedown to put a stamp on the victory.

All three judges scored the fight in favor of Faber, 29-28.

"I felt pretty good," Faber said after the win. "Eddie's really tough. He caught me a little off guard. Thanks for the great fight Eddie."

With Faber's second straight win in the bantamweight division, he has catapulted himself into a title shot against rival Dominick Cruz.

We'll pass along word of the when and the where when it becomes available.