Share All sharing options for: Strikeforce results and LIVE fight coverage for 'Feijao vs Henderson' on March 5 in Columbus 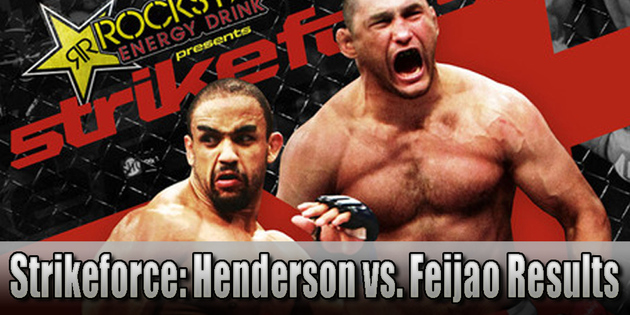 Also putting a belt up for grabs is 135-pound women's champion Marloes "Rumina" Coenen when she takes on late replacement Liz Carmouche.

Without further delay, see below for the latest Strikeforce: "Feijao vs. Henderson" results. (Note: This will go from the bottom up; therefore, scroll toward the bottom for the latest detailed round-by-round action):

Round one: Both fighters come out cautious and "Feijao" blasts him with a low kick. Hendo stalking him and Rafael with a low kick. Henderson with a right and CAVALCANTE SMOKES HIM! HENDO DOWN! Henderson somehow recovers and secures a takedown. Cavalcante in guard as Hendo clears the cobwebs. Feijao with a stingy guard and Hendo smothers. Miragliotta has seen enough and stands them up. Henderson charges with punches and they tie up against the cage. They battle for position and trade knees. Ref breaks it up. They circle until time expires. Close round but I give it to Cavalcante on the knockdown. 10-9.

Round two: Hendo comes in firing and Feijao ducks under and tries for the takedown but can't get it. They go to the cage. No action. Shamrock says it's the Brazilian's job to work because he's younger. Thanks Shams. Cavalcante with a trip takedown that gets him nothing but a knee to the breadbasket. Hendo shows him how it's done and takes him down. Unfortunately he doesn't do anything while he's there and gets reversed. Now he's in guard and forced to defend but Cavalcante not doing much either. Ref stands them up and the crowd approves. High kick misses for the champ as does a wild left hook. Superman punch from the challenger and then a hard low kick. Another Supes sneak attack and he uses the surprise to score a takedown. Hendo elbows the thighs until time expires. 10-9 Henderson.

Round three: Both men sucking wind. Hard low kick from the champ and Hendo blasts him with an uppercut. Hendo clinches but can't get the takedown. Henderson steps in and flattens Cavalcante with a right who hits the ground like a bridge jumper. Henderson pounces and treats Feijao's head like a coconut on a deserted island. That's a wrap.

Round one: They exchange leg kicks to open the 135-pound title fight. Carmouche eats a right then a low kick. Liz lands a low kick and gets blasted with a right for her efforts. Low kick lands for the champ. High kick misses. Long feeling out process here and the crowd lets them know it. Liz tags Coenen but "Rumina" doesn't even bat an eyelash. Carmouche rushes and they go to the cage. Coenen with a standing rape choke. They exchange foot stomps and continue hugging. It's not as hot as it sounds. Referee agrees and breaks it up and front kick for Marloes lands and Carmouche backs her up with a flurry. Marloes has a mouse under her eye but still gets a 10-9 from me.

Round two: Low kick for Carmouche and Coenen answers. Carmouche rushes and they go to the fence. "Girl-rilla" for the takedown but can't get it. Standing guillotine from Coenen and it's deep! Carmouche forces her to the floor and it pops out. From guard, the champ is wall walking and goes for the armbar but Carmouche postures up and drops a sledgehammer. More submission attempts and Liz passes the guard and goes to the north-south position. Still not hot. Coenen eating knees and could be in trouble. Carmouche effortlessly to side control and Marloes goes for an ankle but Carmouche defends and mounts. Punches are raining down hard. This one is close to being stopped. Ten seconds left and it will be a miracle if she survives. Wow. That was close. 10-9, maybe 10-8 for Carmouche.

Round three: Coenen looks wobbly and delivers a low kick but gets pushed to the cage and they jockey for position. Short elbow lands for the champ and then a knee. The challenger absorbing knees to the legs and reverses position and gets the takedown. Coenen can't stop her from getting mount and it's a repeat of the end of round two. Liz just completely dominating her and pounding away with ground and pound. Coenen blocking punches with her face which not surprisingly is not an effective defense. This is getting ugly. Carmouche plays patty-cake on her face until the bell. 10-9 Carmouche.

Round four: Championship rounds. Carmouche rushes and wants the takedown but they fall, scramble and it's Coenen on top. She stands and looks to pass but Liz just jumps up and bumrushes to secure yet another takedown. Carmouche gets a little overzealous and just plops into guard with an arm trapped and HOLY SHIT COENEN PULLS A SILVA/SONNEN AND TRIANGLES HER WAY TO THE PROMISED LAND!

Round one: Manhoef tries to sneak in a "Spider" high kick but misses. Kennedy shoots and Manhoef Black-Swans his way out of it. So much for Kennedy going for the knockout. Front kick for Tim. Kennedy shoots and fails. Melvin airballs a low kick. Manhoef catches a kick and punches the chest, sending Tim airborne across the cage. Manhoef creams Kennedy with a low kick and it puts him on his ass. Kennedy gets back up and quickly shoots and presses the Dutchman into the cage and muscles him to the ground. They might as well just stop the fight now and save me the typing. Manhoef gets mounted and gives up his back. Sigh. Kennedy flattens him out and drops bombs until he finds the opening and ends it with a rear naked choke.

Round one: Game of twister to open the fight as ref shouts colors and appendages. Billy kicks and Jorge jabs. Low kick for Billy. Evangelista's baggy foil shorts look like they were cut from an astronaut's suit. Quick takedown but they're right back up and working for position against the cage. Ref shouts for action. They separate and Masvidal lights him up in the stand-up causing Evangelista to shoot and get the takedown. Arm-in guillotine from Gamebred but Billy shakes it off and they stand. Billy with a nice elbow. Masvidal eats knees to the leg and pushes off. The exchange in the center and Billy with a spastic half-kick. Masvidal lands two jabs and they lock up at the bell. 10-9 Masvidal for me.

Round two: Evangelista misses a kick. They clinch and knee their way to the cage. Failed takedown and Evangelista eats a knee. Jab for Jorge. Trip takedown and Evangelista goes down but springs right back up. Evangelista shoots and Masvidal laughs it off. Nice body shot by Jorge. Billy getting outclassed on the feet. He rushes and Jorge punishes him with a knee then tags him with a straight right. Evangelista shoots and gets bubkus. Jorge reverses and takes him down after Billy gets scolded for holding the cage. Billy works his way to his feet and Jorge drops him like a bag of hammers. Again he's up and Masvidal takes a coffee break by leaning on him. Cue the boo-birds. They separate and Billy swings and misses. Nice low kick for Billy and they exchange mean faces at the bell. 10-9 Masvidal.

Round three: They show Nick Diaz between rounds and the crowd boos. Wake up, Columbus. Billy comes out aggressive but Jorge dances his way to safety. Billy with a Butterbean-esque low kick that misses and snaps back into place. Masvidal has his peanuts buttered but shakes it off. They go to the cage and Masvidal blasts him with a short elbow. Jab from Jorge who clearly has no interest in finishing this fight. Huge overhand right from Jorge but does nothing to follow it up. Evangelista bumrushes and Jorge tries for the takedown but doesn't get it. They separate and Billy eats a jab. The fans punish them with boos. Even Mauro calls for a finish. Masvidal does a bizarre jog-in-place like the Ultimate Warrior then resets. A minute left and they're pawing at one another. Big uppercut for Billy and Jorge gets on his tricycle to preserve his unanimous decision. Crowd is livid. Ten seconds left and they clinch. Yawn. 10-9 Masvidal.