Share All sharing options for: Jon Jones catches a robber in Paterson N.J., before UFC 128 fight 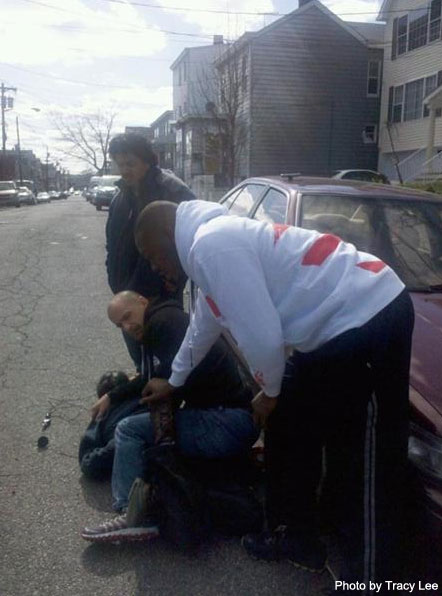 "Bones," who fights Mauricio Rua in the main event of UFC 128 tonight in Newark at the Prudential Center, took to Twitter today to detail his heroic tale of himself and his coach, Greg Jackson, subduing a thief that was robbing an old lady as they pulled up to the park in their vehicle:

"So while we were at the park today a crack head smashed this old ladys car window and took off running with her gps just as we were pulling up. ... right away....Coach Wink goes after this guy. Without hesitation, Coach Jackson went after him...I was shocked and stood there for a second ... then I threw my phone down and went with my coaches. Before you know it, we're sprinting up a steep hill chasing after him. ... I turned the jets on....we caught the guy. We got the lady's gps back. ... It feels so good to help others. It gives me power and energy. ... Coach Jackson is a hero! ... I caught him....Coach Jackson finished him. ... #crackheadshavenocardio"

Above is a picture of Jackson and Jones holding the criminal until the police arrive.

I guess you can add crime-fighting good Samaritan to Jones' rapidly growing resume. Today the world, tonight the 205-pound title?

After the jump, see a video of Greg Jackson talking about the incident.