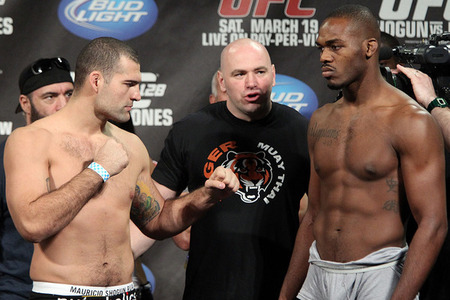 UFC 128: "Shogun vs. Jones" is finally upon us, set to take place tonight, live at the Prudential Center in Newark, New Jersey at 10 p.m. ET.

"Suga" Rashad Evans was originally slated to meet the former PRIDE star at the event, but was forced to withdraw due to an injury. UFC officials quickly worked their magic though, and decided to grant Jones the opportunity of a lifetime after he took care of business against Ryan Bader.

"Bones" has turned into quite the commodity, going from hot prospect to top contender in what seems like record time. The Greg Jackson pupil has yet to disappoint in his seven bouts inside the Octagon, winning in impressive fashion in all but one of those fights, a loss by disqualification due to illegal elbows (he was dominating that fight).

As for Rua, the former PRIDE grand pix champion and current 205-pound kingpin is coming off knee surgery and a near year-long layoff. The oddsmakers have taken that into account, inserting him as the underdog in his very first title defense.

With everything on the line and the whole world watching, will Jones prove all the hype was justified? Or will "Shogun" hand him his first legitimate loss as a professional and solidify his status as the best light heavyweight in the world?

How he got here: At just 23 years-old, Jones' rise to the top has been nothing short of amazing. "Bones" entered the UFC with a background in Greco-Roman wrestling and was an NCAA All-American at Iowa Central Community College. Fans and pundits immediately took notice when Jones defeated Stephan Bonnar in a dominant unanimous decision and since then, with many touting him as a future light heavyweight champion. From there, the Greg Jackson student would not disappoint as he finished his next four opponents in spectacular fashion, including submitting top-ranked light heavyweight Ryan Bader via guillotine choke to earn his shot at the crown.

How he gets it done: "Bones" needs to utilize what got him here -- his tremendous wrestling and athleticism. Opting to stand and trade with "Shogun" would prove to be a far more difficult task against the deadly Muay Thai striker. Once Jones brings the fight to the mat, he will have to keep good posture and use his reach effectively to work some ground-n-pound. The 23 year-old will also need to remain weary of Rua's guard, as he is tremendous at sweeping opponents and ending up in top position.

How he got here: "Shogun" has been among the elite in the light heavyweight division since 2005 where he captured the PRIDE grand prix championship at just 23 years-old. To win that prestigious honor, he had to defeat the likes of Ricardo Arona, Quinton "Rampage" Jackson, Alistair Overeem, and Antonio "Rogerio" Nogueira. When he first entered the UFC, he hit a bit of a rough patch, however, when he lost to Forrest Griffin before winning an ugly fight against an over-the-hill Mark Coleman. Since then, Rua has returned to form, defeating Chuck Liddell, before handing Lyoto Machida is first career loss en route to winning the 205-pound title.

How he gets it done: If Rua is to succeed in his first title defense, he will have to keep the fight standing and utilize his considerable Muay Thai skills. The 29 year-old will have to stay sharp if he ends up on his back and either scramble or sweep his way to better position. Most feel that "Shogun" will be over-matched on the ground, but Jones has never had to deal with anyone that holds the skills Rua brings to the table, at least on the mat. If he sweeps Jones and gets on top, look for Rua to land some devastating ground-n-pound but if not, don't be surprised to see him utilize his Brazilian jiu-jitsu in looking for submissions.

Fight "X Factor:" "Shogun" is coming off nearly a year away from mixed martial arts, once again recovering from knee injuries. Ring rust is real and that very well may mean Rua's timing will be off. And if past fights against Forrest Griffin and Mark Coleman are any indication, Jones will have a pretty big edge just based on the extended layoff.

Bottom Line: This fight represents the biggest challenge of Jon Jones career and most people are already looking past "Shogun" and toward a potential fight against his teammate Rashad Evans. That could prove to be way off the mark. If Rua is at 100-percent like he claims to be, this will be tremendous battle and by the time it's over, he will prove why he's the champion. I believe the Brazilian will score the victory a bit later in the fight when he can test Jones' chin, leading to a technical knockout victory. However, no matter what happens, the truth is, Jones deserves to be here. Combine that with "Shogun" being such a worthy champion and we're going to be treated to a spectacular main event.

Who will walk out of UFC 128 holding the light heavyweight title?

Who's walking out of UFC 128 with the light heavyweight title?