UFC 128: Shogun Rua getting no respect in his fight against Jon Jones

Share All sharing options for: UFC 128: Shogun Rua getting no respect in his fight against Jon Jones 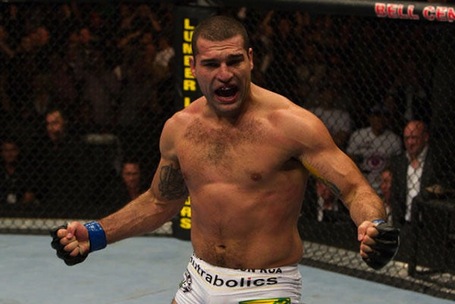 Leading up to tonight's (March 19) main event light heavyweight title fight pitting champion "Shogun" Rua against challenger Jon Jones, the media has transparently followed a rather direct narrative: that a new age is dawning and the old guard, Rua, will be replaced by the new school, Jones.

Pundits, oddsmakers and an abundance of fans have all banded together to proclaim "Bones" the next big thing and it's largely accepted at this point, that UFC 128 is his coronation as the new king of the mixed martial arts world.

Are there a number of folks out there picking the champ to retain his title? Sure. But they are few and far between and at least one of them is a (Nostra) dumbass.

In some ways, if you were to listen to the plethora of quotes coming a mile a minute from every direction, you might think that only one person can stop Jones from becoming champion -- himself.

This, of course, utterly and completely disregards the man he's up against, one of the greatest 205-pound fighters that has ever lived. And there's at least one man who's sick and tired of the total lack of respect paid to his fighter and his friend -- Rua's manager and mouthpiece, Eduardo Alonso.

"I got a little more emotional per say, or more pumped up and fired up for this fight than ever before because, quite honestly, I'm growing tired of people doubting (Shogun). I mean, it happened against Chuck Liddell, we figured out it was okay because he was coming from injuries and his performance against Coleman wasn't that great. Then it happened the same against Machida for the first time but he went in there, did a great fight, it was controversial, we thought he won. Then there was a rematch and the same happened, people all like, 'now Machida is a genius and will come with a super strategy in this fight because he spent all of his possibilities in the first fight.' So, this whole thing is really getting annoying. I mean, this guy (Shogun) has been fighting and winning and beating top opponents for about seven years already. I mean, what else does he have to do to prove his worth? Jon Jones is a very talented fighter, I think he is really really a guy with a bright future ahead but NOBODY is going to walk through Shogun. ... If someone has the tools and has unpredictability and is proven, it's Shogun, not Jones."

On the surface, it's easy to get sucked into all the hype and hoopla that surrounds Jones. He's a physically gifted, well-spoken, young, hungry specimen who has barely broken a sweat during his run in the UFC.

But if you delve just a little deeper, Alonso makes a compelling case, or at least one that's difficult to argue against. "Shogun" has been tearing through top competition since 2002, whereas Jones' first professional fight didn't even occur until 2008.

It's unfair to their respective opponents to compare their list of victories against one another, as they can only fight whoever is put across from them. But Rua can hold claim to something that Jones simply can not.

The Brazilian has gone to war with the likes of Lyoto Machida for 25 minutes and held his own every step of the way. He traded punches and kicks with "The Dragon" for five rounds and came out on the other side none the worse for the wear.

His losing that fight is immaterial. His ability to not only survive but thrive against a man that was previously untouchable is astounding. The fact that it took him less than a round to knock Machida out in the rematch only drives the point home.

This is not a man to count out of any fight, ever. No matter how high the mountain looks, no matter how deep the maze may appear to get -- "Shogun" has been there and he's done it. This will not be his first rodeo.

Let's not forget that when he steps into the Octagon tonight to defend the 205-pound title, HIS light heavyweight title. Because it is his and it would be a mistake for anyone to think he will give it up so easily.

Jon Jones may be coming to overthrow the king and take his place at the throne. But he will have to walk through hell to do so.