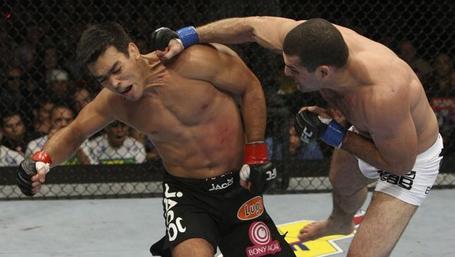 "Welcome to the Machida Era!"

Joe Rogan could hardly contain his enthusiasm after Lyoto Machida separated Rashad Evans from his consciousness at UFC 98 and became the ninth man to hold the UFC light heavyweight championship. His much ballyhooed exclamation has now become a point of ridicule for the long-time UFC commentator.

'The Machida Era' lasted less than a year, upended by a revolution known as Mauricio "Shogun" Rua. It officially ended on May 8, 2010, at UFC 113, but many say it was much sooner than that. For those, the end came at UFC 104, after Rua layed out the blueprint for defeating the once-elusive striker.

After disappointing outings against Forrest Griffin and Mark Coleman, as well as a knockout, impressive as it was, over the aging Chuck Liddell, Rua looked like the "Shogun" of old when he gave the performance of a lifetime against "The Dragon," a fighter who pundits and fans thought would retire as champion.

Before Rua defends the 205-pound crown for the first time this Saturday, March 19, 2011, at UFC 128, against Jon Jones, we will look at his first battle against Lyoto Machida.

Machida made his Octagon debut at UFC 67, a product of the World Fighting Alliance purchase that also brought Quinton Jackon and Urijah Faber to the Zuffa umbrella. He was 3-0 when he met up with "Brazilian Killer" Rameau Thierry Sokoudjou. Proving the Team Quest member was more hype than reality, "The Dragon" choked out Sokoudjou within two rounds.

The impressive win garnered Machida a shot at former champion and polarizing figure, Tito Ortiz, on one of the biggest shows of 2008, UFC 84. Machida impressed, thoroughly dominating "The Huntington Beach Bad Boy" and even survived a last-minute submission scare. It was time for the Karate master to take the next step.

He was then booked against Thiago Silva at UFC 94 in a number one's contenders match to Rashad Evans' newly won title. Machida continued to ascension, knocking out his fellow Brazilian with one second left in the first round. An equally stunning knockout followed against Evans and "The Dragon" laid his claim to the light heavyweight throne.

Mauricio Rua made his debut in the UFC seven months later, co-main eventing UFC 76 against scrappy, fan-favorite Forrest Griffin. Almost everyone, myself included, counted Griffin out of the fight. "This is a showcase fight," I told anyone who would listen. A knee injury, almost three rounds, and a rear naked choke later, I was eating crow. Griffin used this win to catapult himself into the 205-pound elite, while the Brazilian took time off to heal his wounds.

He made his return at UFC 93, against the only man who held a victory over him in PRIDE, Mark Coleman. "The Hammer's" victory in Japan was considered a fluke, the result of a freak injury. Rua did nothing to confirm those theories as he labored against the 44 year-old wrestler. He struggled but eventually secured a stoppage victory with only seconds to spare in the final round.

When he was booked against Chuck Liddell at UFC 97, it was assumed the UFC was using "Shogun's" previous accomplishments to justify a title shot for Liddell should "The Iceman" win. But Rua all but ended the former champion's career with a first round knockout. It was the first time Rua looked like the destroyer of old but it was against an aging Liddell, who was no longer in his prime. This was the criticism voiced when the Brazilian was announced as Machida's first title defense.

So how would it play out?

The two meet in the center of the cage and trade kicks. They clinch up and the champ slams several knees into the challenger's ribs before swinging twice at the his head. Rua is able to dodge these shots, however. More clinch work along the cage ends up with both fighters throwing more knees.

Machida dives in with a knee that digs itself into Rua's body but "Shogun" follows through with a takedown attempt. "The Dragon" stuffs that attempt and the fighters are once again standing toe to toe in the center of the Octagon.

Rua lands a stiff body kick that elicits a reaction from the Los Angeles crowd. The leg kick that follows draws an even bigger reaction. The smack from the kick echoes throughout the Staples Center. Rua then does something that most of Machida's opponents had not been able to do: land a punch.

Only five minutes in and Machida's corner is already icing down his thighs. The leg kicks Rua is landing have already began to accumulate.

Less than half a minute into the second and "Shogun" is swatting at the champion's legs. Each smack is as loud as it is painful against Machida's leg. Rua dives and eats another knee to the body before retreating. He opts to hold some distance as they both exchange kicks. The challenger leaps into the air like a character out of Double Dragon and drives his shin into Machida's ribs yet again. Nearly 10 minutes into the fight and we're witnessing the most calculated, intelligent battle the UFC has ever promoted.

The third stanza opens with "Shogun" again landing a vicious kick to the body. The two fighters spend the next minute, sizing each other up, looking for even the smallest opening. Rua is the first of the two to open up and lands yet another vicious body kick. And then a leg kick. Machida answers with his own body kick and then attacks.

He lands a straight that backs the challenger up against the cage and flurries but is tagged which forces him to clinch up. The third round ends and there is no doubt the champion's body and legs are a bruised up mess.

The championship rounds begin and it is more of the same. "Shogun" attacking "The Dragon's" front leg and body. Machida throws a head kick that is blocked and slips soon after. Rua dives into, going for the takedown but is stuffed by the champion.

Rua lands another leg kick which forces Machida to try to clinch up. "Shogun" definitely looks like the fresher of the two fighters, having not eaten leg kick after leg kick for the better part of four rounds. Going into the fifth and final round, it appears as if the champion must look to finish if he wants to go home with the belt.

The challenger doesn't deviate from his gameplan and immediately begins to attacks the body and legs again. Machida finally offers up some offense about 90 seconds in but also eats a counter for his trouble. Machida is then able to land two knees, one to the body and the other to the head, before clinching the challenger up against the cage.

The referee calls for a break with two minutes remaining and Rua continues to land kicks. He clinches the champion up and breaks away, landing a punch and an elbow on his way out. He spends the rest of the fight stalking the champion, landing strikes almost at will.

In a shocking and baffling decision, all three judges scored the bout 48-47 in favor of the champion. The arena began to shower the cage with boos. They felt the challenger did enough to wrest the title from the 205-pound king. It was an incredible display of martial arts, from both fighters. For Rua especially, considering that no other fighter in the UFC had been able to penetrate Machida's defenses.

"Shogun" used the heartbreak suffered after this loss and harnessed it towards their immediate rematch. He decided his own fate the second time around and won the fight in the first round via devastating hammerfist knockout. Nearly five years after he superman punched and soccer kicked his way to the top of the 205-pound ladder, he was once again the man to beat.

But it was his masterful performance at UFC 104 that paved the way for his return and the true beginning of the end for "The Machida Era."