Bellator 36 results live for event in Shreveport, LA, on March 12

Share All sharing options for: Bellator 36 results live for event in Shreveport, LA, on March 12 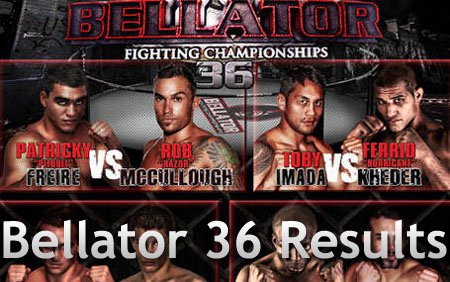 "Razor" Rob McCullough squared off against Patricky Freire in the main event of the evening, while Toby Imada took on Josh Shockley.

In other action, Carey Vanier took on Lloyd Woodard, while Michael Chandler collided with Marcin Held.

So how did everyone do?

Complete Bellator 36 results after the jump:

155 lbs.: Patricky Freire def. Rob McCullough via TKO in round 3
Fight Recap: One hell of a main event to end the evening. After every fight before it was finished, it looked like these two were headed for a decision. It's a good thing they didn't because this fight was extremely close. Freire dominated the first round, getting a takedown and advancing his position multiple times. He threatened with a choke but couldn't get the finish. He easily won the round, however. The second frame was much closer with McCullough likely taking it with superior kickboxing. He landed a ton of kicks and it looked as though he was landing the cleaner strikes. The third round continued the theme of the second, although it was much closer. Toward the end though, "Razor" Rob threw a lazy low kick and Patricky made him pay for it with a looping right hook that found its mark for a flash knockout. He followed up with punches to get the stoppage to move on in the tournament. Very impressive performance.

155 lbs.: Toby Imada def. Josh Shockley via submission in round 1
Fight Recap: Quick end to this one. Shockley ended up on top and Imada immediately started working for an armbar. Shockley picked him up for a slam and brought him down in an awkward position that had his arm bent at a weird angle after the slam. He screamed and apparently that was enough for the ref to stop it. He didn't tap, physically or verbally, but the ref made a judgment call and stopped the fight. Odd ending but Shockley didn't protest the stoppage.

155 lbs.: Lloyd Woodard def. Carey Vanier via TKO in round 2
Fight Recap: Lloyd Woodard came into this fight with an undefeated record of 10-0 and yet he was the underdog. By the time it was done, he sent a message to the rest of the lightweights in the tournament that his spotless record is legit. He struggled a bit with Vanier's grappling in the opening frame but wasted no time in the second round, landing a straight left hand that sent his foe crashing to the mat and finished him shortly after. Upon viewing the replay, after the punch got the knockdown, Woodard went for a kimura but Vanier defended by flipping and getting back to his feet. At that point, he went for a knee and his legs got awkwardly tangled up somehow and his knee looked like it buckled underneath him. He fell out and just covered up while Woodard unloaded with punches until the ref stopped it.

155 lbs.: Michael Chandler def. Marcin Held via submission in round 1
Fight Recap: Extremely impressive performance from Chandler in this fight. He came out full steam ahead and went for the takedown. After securing it, Held started going for submissions and locked in a disgustingly tight kneebar. Chandler was somehow able to get out of it but was forced to fend off sub attempt after sub attempt. He avoided all of them and eventually decided to go for one of his own, an arm triangle choke. He locked it in and it wasn't long before Held blacked out and the fight was over.