Shark Fights 14 results live for 'Horwich vs Villefort' on March 11 in Lubbock, TX

Share All sharing options for: Shark Fights 14 results live for 'Horwich vs Villefort' on March 11 in Lubbock, TX 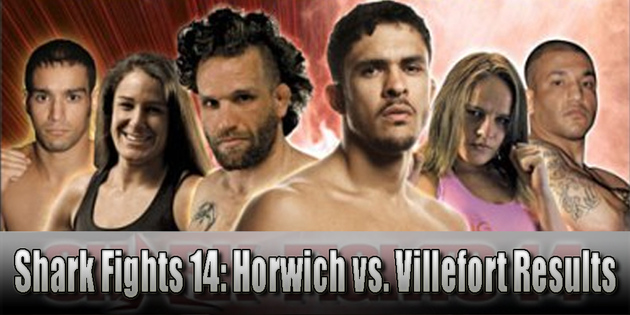 Rounding out the main card was a pair of welterweight tilts with Lucas Lopes taking on Mikel Bronzoulis while Alex Cisne squareing off against Eric Davila. Sean Shakour vs. Joseph Sandoval is also provided bantamweight action.

So how did everyone do?

185 lbs.: Danillo Villefort def. Matt Horwich via unanimous decision
Fight Recap: Horwich is known for his uncanny ability to stay in fights, no matter how far behind he may get. He did the same here but Villefort was simply too much for him to handle, as Danillo cruised to a unanimous decision win, taking all three rounds on all three judges scorecards. He controlled the grappling, kept better position and was the far superior striker. Simply put, he was entirely too athletic and explosive for Horwich to handle. The crowd, small as it was, booed when the horn sounded. Move along folks, nothing to see here.

125 lbs.: Tara LaRosa def. Carina Damm via submission in round 2
Fight Recap: The ladies were a bit tentative to open the action with LaRosa landing the better punches. She got caught in an exchange however, and got taken down and ended up on the business end of Damm's full mount attack. She stayed cool and rolled out, finishing the round on top. The second frame saw her land a few shots early that sent Carina to the canvas. Damm immediately grabbed a leg and worked a heel hook; problem was, so did Tara and hers proved to be far more deadly as she forced the tap with it.

170 lbs.: Mikel Bronzoulis def. Lucas Lopes via unanimous decision
Fight Recap: This fight was the epitome of a slopfest, as Michael Schiavello called it. Bronzoulis came out hard and fast but Lopes weathered the early storm to come back and blast his way to a favorable first round. However, he gassed badly with all the winging punches he was throwing and Mikel took advantage throughout the next two rounds. While he was certainly not the picture of perfect technique, his straight punches and knees from the clinch, along with a solid sprawl, was enough to win him the fight. Sloppy but fun... kind of.

170 lbs.: Eric Davila def. Alex Cisne via TKO in round 3
Fight Recap: Davila landed a few hard shots that seemed to rock Cisne to open the fight but Alex quickly recovered from any damage sustained and took Eric down multiple times, while also threatening with submissions. Cisne outgrappled his foe for the duration of the second frame but was badly hurt with a big punch to close it out. Both fighters were sucking air to start the third but it was Cisne, who had been winning the fight up to that point, who just didn't have anything left. Davila landed a few big right hands and that Cisne wanted no part of and the ref mercilessly stepped in to make the save.

135 lbs.: Joseph Sandoval def. Sean Shakour via unanimous decision
Fight Recap: Incredible way to open the night's action. Shakour came out in the first round and absolutely dominated Sandoval, taking him down and taking his back, nearly finishing him. While it looked like the second frame would be a carbon copy of the first, Sandoval was able to reverse his bad position this time and work top control to tie things up. He then took the fight over in the third and as color man Frank Trigg said, "he took Shakour's heart" en route to the decision win.

170 lbs.: Gabe Vasquez def. Layne Hernandez via submission in round 3
Fight Recap: These two wasted no time getting down to business, as Vasquez opened with a big head kick. He got taken down for his trouble but nearly finished it early with an armbar. Hernandez escaped and subsequently threatened with a rear naked choke. A big head kick knockdown and near triangle finish likely won Vasquez the second but it didn't matter as he caught Hernandez in a tight guillotine in the third after Layne shot in for a takedown and put him to sleep.