Share All sharing options for: Jon Jones: 'I'm going to win this fight' against 'Shogun' Rua at UFC 128 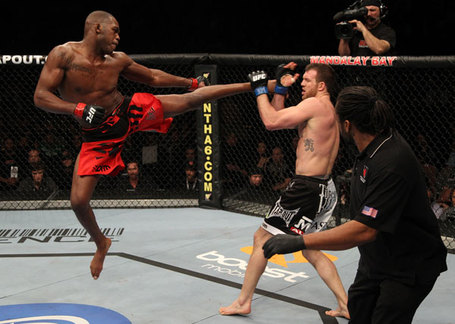 As told to Ariel Helwani:

"You know what, I thought Shogun was cool when I was younger because he was a 23-year old Pride champ, and I love Jose Aldo because he's a 23-year old UFC champion. I'm definitely not afraid of it, I know it's very possible. Right now, I just need to keep the people close to me that's always been there and realize that there's going to be a lot more distractions coming my way but I'm prepared for it mentally. And I promise myself that I won't allow myself to fall by the wayside. I'm way too close to my dreams to slow down or start doing anything dumb and I won't do anything dumb. I'm gonna win this fight."

On the same night Anderson Silva successfully defended his middleweight title against Vitor Belfort (oh, that front kick), Jon Jones was busy earning his first shot at the UFC light heavyweight title currently held by Mauricio "Shogun" Rua. "Bones" choked it out of Ryan Bader in the second round of their UFC 126 co-featured fight. When the night started, Jones was aware of his teammate Rashad Evan's knee injury but had no clue the UFC had plans to offer him a title shot after his victory. A mere six weeks away from his March 19 date with the 205-pound kingpin, the Greg Jackson product says he's not afraid of the journey to come and he's taking the gold for himself. Well, we know Jones thinks he's going to win -- do you?