Share All sharing options for: Anderson Silva vs Georges St. Pierre superfight likely with GSP win on April 30 in Toronto 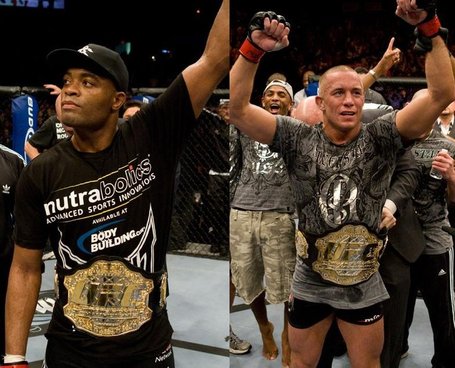 So says Dana White at the UFC 126 post-fight press conference:

"Yeah, if St. Pierre beats Shields in Toronto, I think we'll do that fight. ... GSP is up next for Anderson Silva. ... It's looking like we're going to do this GSP fight. I gotta figure out this (Yushin) Okami thing. So yeah, he's going to be pissed. The big piece in making this fight (Silva vs. GSP) is where is it going to happen. I don't know. ... GSP has to beat Jake Shields and he has to come out of it healthy. ... We're going to do that fight at 185-pounds."

Step aside, Yushin Okami, there's a superfight to be had. After Anderson Silva knocked out Vitor Belfort with a front kick in the main event of UFC 126: "Silva vs. Belfort" on Feb. 5 in Las Vegas, Nevada, company President Dana White was faced with the obvious question -- who's next for his 185-pound champion? It looks like as long as his 170-pound champion, Georges St. Pierre, can get past his considerable challenge at UFC 129 on April 30 in Toronto in Jake Shields, the "Fight of the Century" will finally be made. Who knows what's next for Okami, but really, do you care? Now that we're just one "GSP" win away from a megafight of epic proportions, are there any Shields fans left?