Share All sharing options for: Michael Bisping spitting at Jorge Rivera corner will result in disciplinary action from Dana White 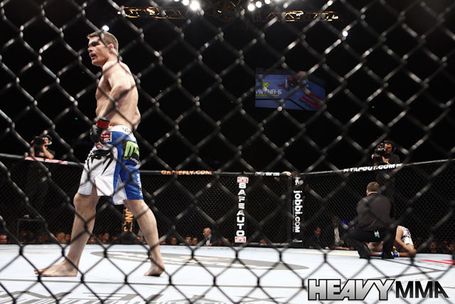 All the hype for the UFC 127 co-main event fight between Michael Bisping and Jorge Rivera came to a head on Feb. 26 at the Acer Arena in Sydney, Australia, when "The Count" mercilessly pounded out "El Conquistador."

What he also did, was land an illegal knee and spit at his beaten foe's corner men.

He claimed that wasn't the case; that he was simply spitting at their feet to accentuate his feelings of disgust for them and the various videos they made mocking him.

However, this being the 21st century, video of the incident quickly hit YouTube and the evidence is pretty damning against him.

Apparently that was enough to convince the bossman Dana White that some disciplinary action is in order. That's what he told MMAFighting.com, saying he's not sure if it will be a fine or a suspension but there will be punishment.

Oh yes, there will be.

Fight fans the world over are likely pulling for a simple fine in lieu of a suspension, seeing as Vitor Belfort has thrown his name in the hat of potential opponents for Bisping the next time he hits the Octagon.

"The Phenom" believes he will put up a much better fight than Rivera did, and with his track record, despite the loss to Middleweight Champion Anderson Silva at UFC 126, it's hard not to believe him.

All that talk is put on hold until the boss brings down the hammer and we know the repercussions for "Spitgate."

The question is, how swift will he bring that hammer down?

What's fair, Maniacs? A fine or a suspension? Maybe both?