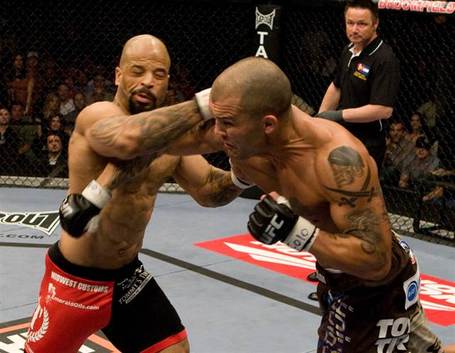 If you don't remember the first time light heavyweight brawlers James Irvin and Houston Alexander fought, don't worry, neither does "The Nebraskan Assassin."

That's because "The Sandman" put him to sleep in just eight seconds at UFC Fight Night 13 back in 2008.

Now Alexander will have a chance to avenge that loss when he tangles with Irvin for a second time as a main card participant in the upcoming Shark Fights 14 event from the Fair Park Coliseum on March 11 in Lubbock, Texas.

Houston had a problem in his UFC run despite storming out of the gate with a crushing knockout win over Keith Jardine. While he was "The Mean 1" in his next fight as well, air-mailing Alessio Sakara back to Italy, his ignorance of the ground game was quickly exposed by Thiago Silva and Eric Schafer.

His ring-around-the-rosy performance against Kimbo Slice at the TUF 10 Finale certainly didn't help matters and it wasn't long before the 38-year-old bruiser was packing his bags -- and getting pounded out by Joey Beltran on the regional circuit.

Can he make it three in a row in "The Lone Star State?"

Not if Irvin has anything to say about it. Like Alexander, the man of sand was sinking as a UFC employee, getting knocked around by Alessio Sakara and Igor Pokrajac before earning his Zuffa release during a dismal 2010 fight campaign.

Since getting the boot from the world's largest fight promotion, Irvin is 1-1-1, having last competed at "Young Guns 4" under the Gladiator Challenge banner, drawing a No Contest (NC) for an illegal knee to the head of opponent Mike Crisman.

Stay tuned to MMAmania.com for future updates to this still-developing fight card.