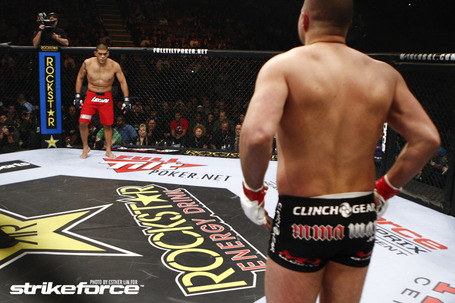 "It seems to us that all isn't this simple and certain technologies might have been used - certainly, not the ones that would be visible to an open eye. Most likely, they were psychological technologies that influenced both fighters from the distance of the crowd. For this reason Fedor simply wasn't himself during fight. Fedor's behavior was very strange to me, and he did exactly the opposite of what we have practiced and discussed before the fight. All of us were in shock! He has never done or behaved this way before. We will wait a week or so, for things to calm down and afterwards we will try to figure out what has happened. However, I might add that the loss has not broken his psychological stability and Fedor will be more than ready to return to the ring. Because of the loss, he is ready to rip apart his next opponents and we will be training three times as much."

Questionable stoppage? Check. Antonio Silva eating the scale after weighing in on it? Check. "Psychological technologies" from the crowd at the IZOD Center? Apparently the Emelianenko camp is ready to check that off as well. In fact, they believe that could be the main culprit in Fedor Emelianenko's crushing encounter with "Bigfoot" in New Jersey on Feb. 12 in the opening leg of the Strikeforce heavyweight grand prix. The former PRIDE kingpin has made a career out of his mental stability and unflappable nature but the IZOD arena occupants seemingly turned the historically stoic Russian into a raving madman. Perhaps his altered state is to blame for his premature retirement talk ... but what will they blame if he loses again? Survivors of psychological technology are encouraged to respond ...