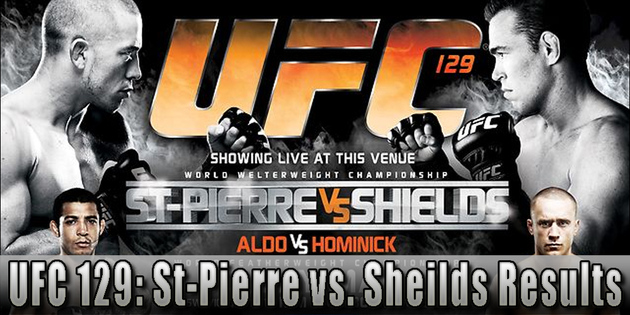 UFC 129 is set to feature a main event between Canada's own Georges St. Pierre, defending his welterweight title against fresh challenger -- and former Elite XC and Strikeforce champion -- Jake Shields.

The event is also expected to include "Father Time" Randy Couture, defying the odds once again to take on Karate master Lyoto Machida.

Here is the current UFC 129 fight card and line up:

Preliminary card (May not be broadcast):

UFC 129 PLAY-BY-PLAY LIVE MAIN CARD COMMENTARY (PPV):
Druby here! This is the biggest fight card in MMA history so sit back relax and enjoy Maniacs. Feel free to score rounds and weigh in with your opinions all night long in the comment section below.

Round two: Nice one two combo from Machida, and Randy tries to tie him up but once again he slips out. Left from Machida. Right from Machida. Left from Coture. Lyoto Machida lands a flying jump front kick to Coture's head and that is it Randy Coture is out cold. Amazing knock out from the Dragon, but you hate to see Randy Coture go out this way. Great win for Machida.

Round two: Nice combo from Henderson, and Bocek charges in going for a single. Henderson landing some elbows now and Bocek picks up and slams Henderson. Hendo right back to his feet and landing some good knees into the thighs now. Knees to the gut from Henderson. The ref breaks them up seems odd both men were working, good hard combo and leg kick from Hendo. Henderson now slams Bocek to the mat and is landing some rights from the postured up position. Bocek ties up a leg and Hendo slips out. Knee from Henderson to the face of Bocek on the way up. Bocek now with a north south position and looking for the anaconda choke. Standing guillotine now from Bocek. Bocek rolls over for a tight choke and now Henderson unloads with some VICIOUS knees to Bocek's face and now some elbows to the head and he lands some more big knees at the end of the round!! Bocek is gushing blood from his head now. Big round for Hendo. 10-9 Henderson.

Round three: Hard leg kick from Henderson, but Bocek gets a take down because of it. Bocek in full guard. Hendo with a brief guillotine and then a elbow to the head. High guard for Hendo. Henderson slips out and winds up on top and is landing BOMBS on the face of Bocek. BIG elbows now and rights to the body. Bocek ties up a leg and uses it to sweep Henderson. Bocek jumps on the back as they stand up. Henderson shrugs off Bocek and now their tied up against the cage. Henderson with a hard knee to Bocek's head. Hendo now working hard for a take down. Hedno landing some elbows and is sprawling out as bocek looking for a single. HARD knees from Henderson and a nice flurry of punches that find their mark. Bocek shoots for a double and gets the take down. Half guard for Henderson. North south position now. Henderson up to his feet and lands some more BIG knees and a huge flurry of punches to end the round. Henderson did some damage of the feet and should win this round and the fight. 10-9 Henderson.

Round one: Roberts comes out fast and looks to bang but Patrick immediately takes him down and puts him on his back. Roberts with wrist control and looking to isolate an arm for a kimura. He's really working for it while Patrick is trying to rip his arm free. They stand up in the same position and break. Nice chess match already. Nice leg kick by Claude and he uses it to clinch up. They're up against the cage, locked in a battle for underhooks. Finally a break. A couple shots land by Patrick and he gets another takedown. Same song and dance as last time, Patrick looks to pass. Daniel defends well and utilizes rubber guard. Up they come and Patrick starts landing shots with Roberts just covering up. He grabs a Thai Plum and the crowd collectively asks for a "KNEE!!!" That was awesome. 10-9 Patrick.

Round two: Roberts comes out with a takedown. My stream goes out for a minute and now it's back with about two minutes remaining and Roberts is on top in side control. Sorry, folks. He's looking for an arm triangle but Claude gets it into half guard. Daniel is working from on top still and he's scoring points, no doubt, but he hasn't truly threatened to end it. Patrick gets back to full guard. Roberts moves to the back as Patrick stands up and drags him down but Patrick gets back and they go back to the feet. Roberts looks tired now and Patrick lands a right hand. Round ends and I missed most of it. Based on what I saw it was close. Don't take this to the bank, guys. 10-9 Roberts.

Round three: I've never had this many problems with the stream. It went out and just now came back in with about two and half minutes to go. They're scrambling up and they reset. Sorry, again, Maniacs. Wish this didn't happen. Roberts looks tired still but he's shooting in to get the fight to the floor but Patrick defends. Wraps up a guillotine but not quite. Ha. Ugh. The crowd begs for knees in unison but Patrick doesn't oblige them. Lot of clinch work, enough to force a break from the ref. Thirty seconds left and the ref lets them know it's time to get dirty. Roberts misses a takedown and Patrick looks in a guillotine. Daniel gets his head free and the fight ends with him on top. He gets up and walks away with his hands raised. The crowd boos boisterously. 10-9 Patrick. I guess.

Round one: Loading with kicks to get this thing rolling. They're really pushing the fact that Menjivar fought GSP back in the day. We got it. Whoa big punch in the clinch from Menjivar. Maybe an elbow, according to Rogan but it was loud and that thud was sick. McCarthy is saying his jaw is broken. That was sick. Replay shows a short hard straight elbow. New angle shows it's not his jaw but his nose. Wow.

Round one: MacDonald gets a big time pop from the live crowd in Canada. He shoots in immediately after Jensen lands a few shots. MacDonald goes head on into a guillotine but pops out and takes the back. Transition and before you know it, boom, he locks in a triangle and it's only a matter of time before Jensen taps. That was sweet.

Round one: Kick to start from our dear Watson. And another. Not much action in the first minute. Kyle is the aggressor here in the early going. No one really landing well just yet. Kind of sloppy actually. Watson half shoots in but backs out. Lands an inside kick. Couple knees land in the clinch for Watson but he eats a few shots for his trouble. Makdessi is executing the "bounce around like crazy and do very little" gameplan. Oh, flashy side kick. Joe Rogan calls it the Cung Le express. More kicks from both guys. Action is dull enough the ref calls for them to pick it up. Round ends and there wasn't much to it. Might have gone to Watson on aggression or possibly Makdessi on counter-striking. I'll go the latter. 10-9 Makdessi

Round two: Watson comes out like he's got a fire under his ass and starts pushing forward landing shots. Gets countered, of course, and backs out. Makdessi is landing when he wants to, just boxing Watson up. Whoa, big head kick by Watson off a nice little feint. More flashy kicks from John and he avoids a shot from Kyle. This has the feel of a close and controversial decision. Makdessi lands another nice punch. Missed head kick from Watson. Makdessi lands a spinning back fist shortly after Watson missed one of his own. Slow rolling, methodical fight we have here. Makdessi is landing bigger and bigger as the fight goes on, though. Rogan is making repeated note of Watson leaving his chin up in the air, which is a great way to get knocked out. Watson getting fancy with kicks but he's not landing nearly as well as Makdessi. Big exchange to end the round and it's clear who took that one. 10-9 Makdessi

Round three: Five minutes to glory for one of these two strapping young fellas. They get balls deep in it to start the action in the final frame. Watson pushes forward and eats plenty of shots. A clinch leads up to the cage but when they break Watson is cut under his left eye. Makdessi is like a shark smelling the blood and comes in aggressive. Holy mother of shit, Makdessi lands a HUGE spinning back fist straight on the chin and Watson is out cold. That was beautiful.

Round one: The Facebook stream finally starts and we're already halfway through the opening round. Big shot from Jabouin knocks the mouthpiece out of Garza's mouth. These two are banging it out a bit. Plenty of kicks and Jabouin is landing big with those legs. Garza gets aggressive and holy shit he throws on a flying triangle. He's almost got it in and he rolls him over. Yves hanging tight but Garza is on top now and grabs an arm to go with it. He's pulling on the back of the head and that does it. Hell of a triangle and way to stay with it.