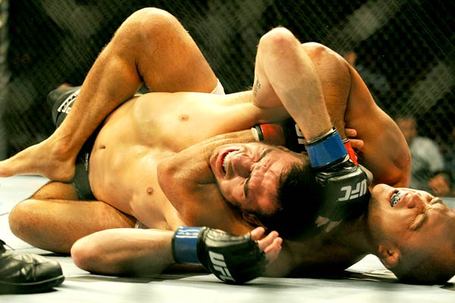 The most desired result when grappling, one of two ways to finish a fight before going to the judges scorecard. What the sport of mixed martial arts was founded upon. What the pioneers of MMA studied and applied the most in the sports earliest days. From Royce Gracie to Ken Shamrock, if you didn’t know submissions then broken bones and unconsciousness was in your immediate future.

In the first look in on submissions I was slightly pretentious in starting with one of the more rare submissions to pull off. The Anaconda Choke is one of least seen out of the most common known submissions. This time around we will see a much more common submission.

The Rear Naked Choke is a bread and butter submission for a lot of fighters. It is much like a upper cut in the stand up game in that it is best used at an advantageous or dominant position and is essentially the conclusion in most fights being that both tend to end fights.

For some history, technique and notable uses follow me after the jump 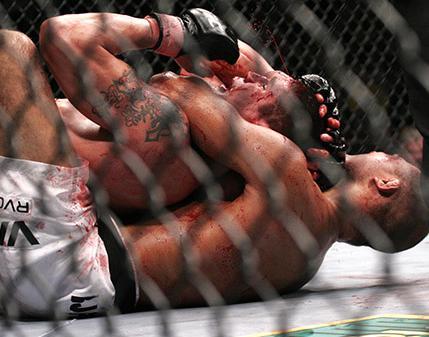 The rear naked choke is simple in its explanation. The choke cuts off the flow of blood to the brain. When latched on effectively it will force your opponent to submit or within seconds it could pass them out unconscious.

The name "Rear Naked Choke" most likely comes from the name used in Judo for the technique, "Hadakajime" or translated a "Naked Strangle". It was called that because the choke does not need the "gi" to perform thus prompting its reference to being naked.

The choke itself is simple in performing. However, to get to the position to apply it is where its gets tricky. In order to attempt the choke you first must achieve the back mount. From that position of back control, which can be secured even more by hooking the insteps of the feet into the inside of the opponent’s thighs, the choke can be effectively applied. The reasoning behind the hooks is to prevent your opponent from using their hips to attempt to escape. Anyone familiar with grappling should know that hip control and wrist control are vital to almost any transition or submission. 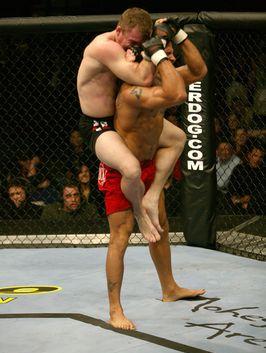 The technique involves wrapping one arm around the opponent’s neck so that the inside of your elbow is placed against his throat. By doing this, you will have put your bicep against one side of his neck and your forearm against the other side of the neck. From there you have two options for sinking in the choke and applying the pressure needed for the submission. You can place the hand of the arm you have wrapped around the neck on the bicep of the other arm and the hand of the other arm on the back of the opponents head. From there you hug your arms together and push out with your chest.

The pressure of pushing his head into the pulling of your forearm will provide the pressure. And having the hooks mentioned previously will allow you to stretch out your opponent making it even tighter and allowing less oxygen for your opponent. 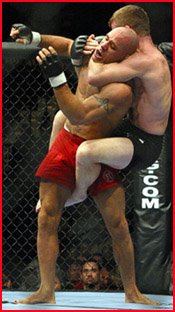 The other option is to use what is called the Gable Grip. We have discussed this grip previously but to refresh, the Gable Grip is when you take the hands of both your choking arm and your free arm and place them together with the palms facing. From that position you can squeeze the choking arm tight against the neck to earn the tap out. It is a little harder in my opinion to finish from here as I have found that for me personally the choke is more difficult in terms of controlling the head. However, it all depends on situation and placement as to how effective the different grips will be.

One of the more notable fights ending with the Gable Grip is the rear naked choke used by Fedor Emelianenko in his quick submission of Tim Sylvia. It also has been referred to as the "Severn Lock" as it was used by Dan Severn in the early UFC days.

Another interesting bit of technique in terms of MMA is the usage of gloves versus the lack of them in a jiu jitsu match or submission wrestling. Wearing 4 oz gloves actually makes the completion of the choke much more difficult to slip behind the head and also to clash hands as tightly as typically desired. That tends to force the head cupping hand to be more on the crown. What is most important is that you do not allow that hand to slip or you will lose all leverage of the choke.

So to recap the simple steps of the rear naked choke are to first gain back mount. Pass your arm around the front of the neck until your opponents neck is in the crook of the point of the 90 degree angle your bent elbow makes. Bend the other arm so that it is behind the back of your opponents neck or as close as possible. In a technical aspect your forearm should be directly behind the neck to be as tight as possible. Now place the hand of the arm holding the neck through the bracing arm and wrap it around your bicep. This will not only help in pressure but give you very effective control to hold the choke in place.

For more effective techniques to finish the hold start by wrapping your legs around the opponent. Those will be called your "hooks" and this will prevent turning and wiggling out with the hips. You can also cinch in a body triangle which is when you place your legs just like you would a traditional triangle choke but instead around the abdomen which makes it restricting to breathe and extremely uncomfortable. This technique is a favorite of Anderson Silva.

To escape the choke you have to be quick. First, swiftly grab the arm that is around your throat, dig in and pull down. This will give you some air and some space to breathe even if very briefly. The choke is a very fast working and dominant choke so it is important to make your move very fast. If possible, when pulling down getting the forearm around your chin would be ideal if you are able to withhold the pain since it would no longer be a blood/oxygen choke.

When you do dig in and get space push your head towards your opponents head and other arm that is behind your head. This is why the hooks are so important. Hopefully, the hooks aren’t in so you can use leverage. So long as their isn’t any hooks you should make enough distance to explode out and using your hips turn so in best case scenario you end up in you opponents half guard or side control. Worst case a scramble ensues.

If the choke is locked in it is very hard to escape. From my experience anywhere between 6-8 seconds is all it takes to put you out when it’s locked in deep. And that depends on the person and their air supply prior to it being locked in.

Another escape method would be to dip your shoulder down and spin toward the elbow of the arm around your throat to face him. This is the way that I have used the most to hope to counter it immediately. Sometimes there just isn’t enough time to try and dig in their arm or try and punch out. This shoulder dip and spin can be performed when you are flattened out on your stomach as well. 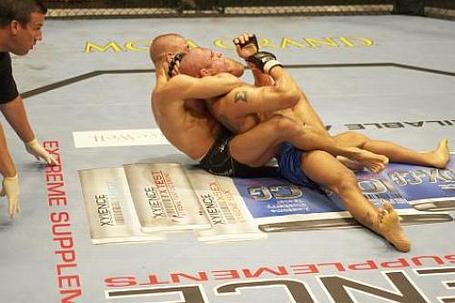 The rear naked choke is a submission used quite frequently by dominant grapplers who are able to achieve mount and back mount. Sometimes when pouring down strikes in the mount your opponent will often offer his back in attempts to avoid the strikes. B.J. Penn has used the rear naked choke as a frequent finisher throughout his career. Dating back to his rear naked choke finish of Takanori Gomi he has also finished Matt Hughes, Jens Pulver, Joe Stevenson, Kenny Florian and most recently Jon Fitch.

Guys like Frank Trigg are also notoriously tied to the rear naked choke because of their lack of defense. Trigg was choked by this submission three times in the course of a couple years to the same fighters, Georges St. Pierre  and Matt Hughes twice.

In this gif we are taking a look at one of those chokes. This one being the match up between St. Pierre and Trigg.

Straight away in the Gif we see St. Pierre immediately using his legs or "hooks" to gain momentum and hip control to roll Trigg over and cause him to be off balance even before the choke is even close to being started. Then in the roll you see St. Pierre very quickly snaking in his right arm under Trigg’s chin and tight to this throat. St. Pierre quickly secures the second hand behind Trigg’s head and begins to push down. He then uses his power arm and his weight and leverage to once again roll Trigg this time into the dominant position with Trigg stretched out and almost immediately Trigg is forced to tap.

Most Notable Usages of the Rear Naked Choke

One of my absolute favorite usages of the choke, Penn already has established dominant position and uses his amazing flexibility to trap one of Pulver’s arms with his leg. With only one arm to defend against a jiu jitsu whiz like Penn it was only a matter of time. Penn slips under the chin and gets his second hand in place. From there he crosses his ankles and tighten Pulver’s body and waits for the tap.

This gif is great for everyone to see because we can see the grappling prowess of Matt Hughes that is often forgotten and we can see both holds to finish the choke. When I previously mentioned the difficulty of glove usage in securing the non choking hand to be placed behind the head I wasn’t remotely under exaggerating. Hughes gets his hooks and grabs the choke. However, when he goes to secure his second hand Trigg gets a hold of it and pulls it down. Hughes not remotely phased revamps and grabs the Gable Grip which very quickly secured the tap out from Trigg.

Another favorite of mine due to the technique used to finish the choke. Silva a jiu jitsu black belt under the Nogueira’s who coincidentally also submitted Henderson uses his long limbs to secure a body restricting body triangle to immobilize the hips of Dan Henderson.  As you can see Anderson is attempting to tuck his second hand and Henderson defends by grabbing and pulling it down, however as he does Anderson latches the Gable Grip all in one motion which also induces the tap.

In an upset that shocked MMA fans throughout the globe, Forrest Griffin submitted Shogun Rua in his Octagon debut. Forrest in this gif already has back mount and hooks. Forrest slips his right hand down through Shoguns arms and works to flatten him out. Using his legs he does just that while simultaneously cinching in the first hand, followed by the second. He pushed down on the head and gets real top heavy on Rua’s neck and secures the tap out victory.

Until next time Maniac’s…..