Michael Bisping: Jorge Rivera is a dork who is just trying to make himself relevant by doing stupid videos

Share All sharing options for: Michael Bisping: Jorge Rivera is a dork who is just trying to make himself relevant by doing stupid videos 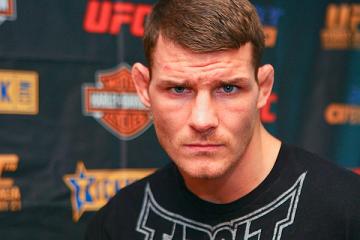 "Rivera's a [expletive] dork and there's only one person who's going to be laughing on the night and that's me. He can try and make himself relevant by talking [expletive] and doing stupid videos. I make myself relevant by constantly fighting the best in the world in main events and co-main events for the UFC. Obviously Jorge hasn't written any of that himself because the guy hasn't got two brain cells to rub together. I doubt he can even read. Looking at him, I don't imagine he spent too much time in school. The guy's 38 years old. You'd think he'd grow up and mature. He's going on like a childish teenager. It's all pathetic garbage. He should spend less time making videos and more time in the gym."

And now it's on like Donkey Kong. Don't count Michael Bisping among the many who were amused by Jorge Rivera's video taking the popular Brit to task. In fact, "The Count" thinks "El Conquistador" has some growing up to do and needs to spend less time making stupid videos and more time in the gym preparing for their UFC 127 co-main event showdown on Feb. 27 in Australia. The line in the sand has been drawn and the war of words has commenced. Will Bisping indeed by the one laughing at the end of fight night like he says? Or will Rivera finish the fight, like he always goes in to do? Don't hold back on this one, Maniacs.