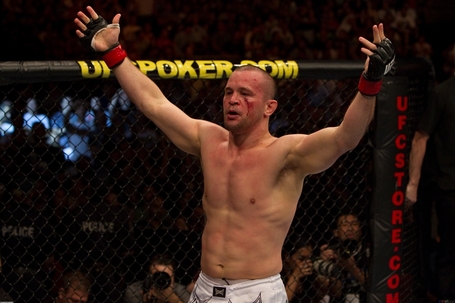 "Without a doubt I want to fight St. Pierre. I don't think it's going to happen but if Georges gets beat by Jake Shields...if he slips and falls on his way into the cage, hits his head and gets beat by him I'd still like to fight St. Pierre. I'd love the title but in my opinion Georges St. Pierre is the best fighter right now and I'd like to fight the best. I want to test myself and I'd like to see how I would do against him because in my opinion he's the best and that's who I want to fight. I really hope he doesn't go up to 185 lbs. so I'll get that chance."

Longtime combat sports veteran Chris Lytle is currently in the midst of a career revival. The welterweight brawler, known for his electric fights and propensity for winning fight night awards, has ripped off four wins in a row; the longest streak of his more than decade long career. He was all set to throw leather against the always dangerous Carlos Condit at UFC 127 on Feb. 27 until "The Natural Born Killer" injured his knee and a replacement was found in the form of Brian Ebersole. Which is unfortunate news for Lytle, considering a win over Condit would have lent more credence to his aspirations of fighting the greatest 170-pounder in the world, Georges St. Pierre. That's a fight "Lights Out" badly wants, even if it's not for the welterweight strap. Jake Shields and a possible move up to middleweight might get in the way of that but there's nothing wrong with aiming high, eh Maniacs?