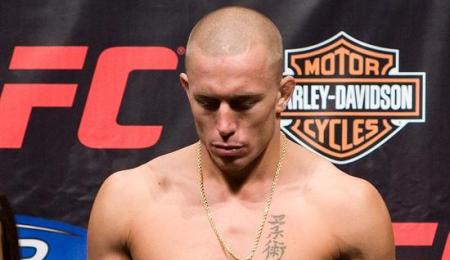 In case you were living under a rock, Dana White announced earlier today (Dec. 7, 2011) that Georges St. Pierre suffered a knee injury and would be forced to back out of his planned Feb. 2012 title defense against Nick Diaz at UFC 143 in Las Vegas, Nevada.

In light of this depressing news, St. Pierre -- along with his friend and doctor Sebastian Simard -- held a conference call with the national media to discuss his injury and to answer questions related to the bad break.

MMAmania.com was on the line and has all the details that were released during the call, which included the specifics of the injury, what surgery he'll require, how long he's expected to be out and who St. Pierre blames for his current predicament.

We'll begin after the jump with a quote from Dr. Simard, discussing just exactly what went wrong with the talented Canadian's bum knee.

"In the preparation for Carlos Condit, he injured his left knee during a sparring session. The diagnosis at that moment was a sprained MCL, a diagnosis that was confirmed by the MRI. Georges tried to continue his trainign camp even though he had the pain and while doing another sparring session, he had the little injury on the right leg at the time and the diagnosis on his right leg was a pulled hamstring. So, having injuries on both knees, we decided to cancel the fight against Mr. Condit.

Georges went on and did his physical therapy and rehab and everything went perfectly. He recovered completely from the injury to the left knee. He started back training and while doing wrestling, he tried to defend a takedown and at that time, he suffered a hyperextension on the right knee. He felt pain and he heard a crack inside his knee at that time. It was terrible to walk and there was not much swelling on the knee so he tried to continue training but in the few days after, he felt the pain and the instability was increasing so he called me, he was in Vegas and we did an MRI on Monday morning. I saw Georges yesterday with the results of the MRI and the physical exam that I did confirmed that Georges suffered a complete tear of his ACL and a small tear of his internal meniscus on the right knee, which is not the same knee that he suffered the sprained MCL in mid-October."

St. Pierre chose to simply rest and let his body heal naturally the last time he suffered the sprain to his MCL, but with the severity of the injury this time around, he's going to have to take more drastic measures if he wants to recover fully.

"Considering the instability and the pain, surgery for Georges is mandatory. There's no way he can compete with the problem on the right knee. We're looking at doing an ACL reconstruction with meniscal repair. The technique that's going to be used is the technique of anatomical ACL reconstruction, which is the best technique for this kind of injury."

Now the money question, how long will it be before GSP is fully recovered and ready to defend his title once more? Dr. Simard finished his statements by talking about St. Pierre's recovery process and included a potential time table until he returned to the Octagon:

"I'm expecting a full recovery for Georges within 6-9 months. The success rate for this surgery is above 95 percent. I've been the treating doctor for Georges for five years now and I did two surgeries on him already for elbow endoscopy. His recovery rate is completely off the charts. He has an amazing genetics and he has extraordinary physical capabilities and I know Georges has the discipline and the determination that's gonna allow him to be back to the same level of competition that he was before the injury."

With the doctor out of the way, it was time to hear from the UFC welterweight champion, himself. Georges St. Pierre naturally is frustrated with his situation, but he's going to be optimistic about his recovery and his future. He had a nice message for everyone (including Cesar Gracie) who's been down on him since his injury was announced earlier today.

"A few months ago I was on top of the world but now I'm in a downfall, but you recognize a champion by how he comes back from a loss, not how he is when everything goes well. Everybody that says bad stuff about me now, mark my words, I'm gonna tell you right now, right now I'm in a downfall in my life, but in a few months I'm gonna be back stronger than ever and I will be champion again. I promise."

Lastly, who did St. Pierre blame for the injury, which occurred a hard training session? The answer may surprise you.

"I believe that there is only one person to blame for what happened and it's myself. I'm the kind of guy where sometimes I endure pain and go through it and that's what I do all the time. I learned a big lesson in my life and it's only gonna make me stronger, smarter and more clever. It's nobody else to blame, it's myself. It's a freak accident that happened in training. This injury I have, it's called a 'compensation injury' because I compensate because one of my legs was almost 100 percent healed but I was compensating a little bit more with the other and I think that's what happened. It's all about compensation and I learned the hard way."

Coming back to 100 percent from an ACL tear can be a very difficult thing, especially for someone who relies on his freak athletic abilities like Georges St. Pierre. We've seen several fighters who were never quite the same in terms of explosiveness after horrible knee injuries like Mauricio Rua. Will GSP ever be the same?

What's your take on the situation, Maniacs?