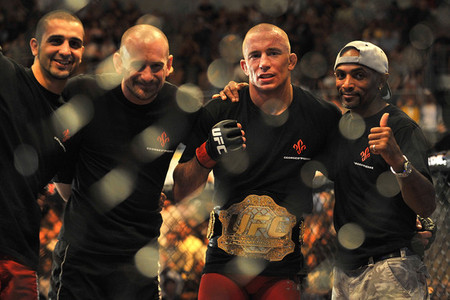 The most dominant welterweight andatop 3 poundfor pound candidate in UFC welterweight champion Georges St.Pierre will not play a factor in 2012.

The Ultimate Fighting Championship (UFC) will lose out on a lot of money next year much like it did without Brock Lesnar this past year. Dana White's claim is that GSP is the biggest money maker for the UFC and we shall see if Lesnar can maintain a steady work schedule in 2012.

The division's future in 2012 will be decided at UFC 143: 'Diaz vs. Condit' when the two explosive welterweights will fight for the UFC interim welterweight championship.

How long does that 'Interim' tag remain?

6. Martin Kampmann vs. Thiago Alves, who rebuilds their title hunt?

The UFC heads back to Australia for UFC on FX 2: 'Kampmann vs. Alves' and as the title states, it will be headlined by two of the hungriest dogs at welterweight.

2011 started as a disappointing year for the 'Hitman' who continued it with another tough decision loss. Kampmann lost to Deigo Sanchez (UFC Live: Sanchez vs. Kampmann) in a closely fought contest that many felt he won. The Dutchman was just coming off a loss to Jake Shields (UFC 121) when many fans, again thought he had won. Kampmann bounced back when he added another L to the once rising sensation Rick Story's record.

Can he hunt down a gold reward?

Thiago Alves was once the second or third best welterweight in the world prior to UFC 100 where he was wrestled by Georges St.Pierre for five rounds. He didn't get back on track as he 2-2 with losses to Jon Fitch and Rick Story and wins against John Howard and Papy Abedi. His losses being to higher ranked fighters has knocked him down a peg. At UFC 138 the old 'Pitbull' got off the leash and stopped Swedish striker Papy Abedi but at times was caught himself. This is his first big name fight since UFC 117 and if we ever see Alves get back on track it must start against Kampmann

Should we expect Kampmann to exploit Alves' take down defense issues?

5. Who has a better chance of returning, Paul Daley or Nate Marquardt?

Britsih striker Paul Daley fought five times in 2011 and posted a 3-2 record and fought Nick Diaz for the Strikeforce welterweight title in a 'fight of the year' candidate this past April.

Daley lost all his 'major' fights by losing to Nick Diaz and Tyrone Woddley in his two Strikeforce fights. He posted wins against Yuya Shirai (BAMMA 5), Jordan Radev (BAMMA 7) and Luigi Fiorvanti (Ringside 11). His only knockout was that of Shirai but Daley failed to make weight and didn't get to capture the BAMMA welterweight title.

Nate Marquardt in a weird way screwed upa nd helped the UFC at UFC On Versus: 'Marquardt vs. Story'. The new main event of Cheick Kongo and Pat Barry was one of the most thrilling fights and it practically saved the somewhat boring event in Milwaukee.

The move from middleweight to welterweight seemed impossible and then the weight cut wasn't the issue it was 'The Great's' testosterone levels as his TRT was messed up andhe couldn't meet the Pennsylvania requirements. It was later punished by firing squad via 140 characters or less.

Nate Marquardt takes on Yoshiyuki Yoshida at BAMMA 9 in his welterweight debut and we shall see what Marquardt can do being a big man in a light weight class.

Who do ya got your money on?

4.Who has the bounce back 2012 campaign? Dan Hardy, Jake Sheilds or Yoshiro Akiyama?

All three men have had big moments and lowest of the lows. Two of them cut from a weight where one once dominated and one who was thought to be undersized for it. Two have been soundly beaten by Georges St.Pierre in title bids.

Dan Hardy was riding high in the UFC as he started off 4-0 and had a highlight reel knockout of Rory Markham to solidify a welterweight title shot at UFC 111. It was then the world was exposed tow hat Dan Hardy was, a brawler with no wrestling. He went 0-3 in his next three matches following the GSP loss and has been outwrestled, outgrappled and outstruck in them. Dan Hardy has expressed a desire for a fight with UFC legend Matt Hughes but nothing has came to life of yet.

If Hardy get's some wrestling implemented, he could

Jake Shields had a tough 2011 as he was beaten by GSP, lost his father and mentor in Jack Shields and was smashed by Jake Ellenberger a week after the passing. Jake Shields was one of the world's best at 185 pounds and made everyone a believer when he beat Dan Henderson (Strikeforce: 'Nashville'). He was convinced to drop weight and gave the UFC a worthy contender to face GSP. Shields won a few rounds but this was after the eye poking. Shields then came back to lose at UFC Fight Night: Shields vs. Ellenberger' and got knocked out. He has fallen and at UFC 144: Japan he looks to bounce back against 'Sexyama'.

Yoshiro Akiyama AKA 'Sexyama' is a huge star in Japan and actually has some very good talents despite his 1-3 record in the Octagon. Somewhere he wasn't able to transfer his talents against the UFC middleweight division but he always came to fight, winning three 'Fight Of The Night' honors. His lone win came against Alan Belcher in a toss up decision. His debut in the UFC at 170 comes against Jake Shields at UFC 144: 'Japan'

Is this weight cut going to put the sexy back in 'Sexyama'?

3. How far will Rory MacDonald climb?

Rory MacDonald has the opportunity to do a lot of ladder/rank climbing as his Tri*Star teammate and the UFC welterweight champion Georges St.Pierre takes close to a year off.

Rory has been nothing short of a stud in the welterweight division as he is 3-1 and his lone loss was against one of the best, Carlos Condit at UFC 115. He has beaten Mike Pyle, Nate Diaz, Mike Guymon and Strikeforce prospect Jordan Mein of note. He has excellent wrestling andeverimproving stand up. His highlight reel moment being his German suplexing and rag dolling of 209's favorite little brother, Nate Diaz.

He starts his 2012 campaign against Che Mills (14-4-1) who is a very good striker and is coming off the UFC 138 'Knockout of the Night' award win when he smashed Chris Cope.

This will be a stiff test and great way to make a name, can he become the enxt Canadian star?

Jon Fitch is a boring fighter, sure but in his past twenty fight he has lost once and had one draw.

Jon Fitch could very well end up the greatest fighter to never hold a world title He has beaten everyone before him except for Georges St.Pierre and BJPenn. His wrestling is off the charts but that fact also leads to his constant snubbing at getting a second chance. Fitch may take you down at will but then what does he really do? stay on top?.

The blessing in disguise for Fitch is that he is going to have close to or a year of no GSP in his division which means his value rises and as long as he wins and stay healthy he may finally get a shot at the UFC interim welterweight title.

1. Who will be champion by years end, Nick Diaz, Carlos Condit, Jake Ellenberger or Jon Fitch?

A collective breath of relief came out across the land of 170ers as GSP needs major surgery on his knee and will miss almost, if not all of 2012 in recovery mode.

There is a set in stone interim title fight at UFC 143 as Nick Diaz vs. Carlos Condit will decide who starts the possible relay of champions until St.Pierre returns. Diaz made his stake at legitimacy when he punched BJ Penn into retirement and Condit made his claim when he kneed 'Stun Gun's' face into oblivion.

Jake Ellenberger vs. Diego Sanchez headlines UFC on Fuel TV 1 and will either push one time lightweight title contender Diego Sanchez or the 'Juggernaut' closer to a golden shot. Ellenberger has three stoppages in his past four and cemented his place in the top ten welterweights by demolishing Jake Shields.

Jon Fitch looks to decision beat Johnny Hendricks at UFC 141 and finally get his title shot part deuce but with recent comments from Dana White, his 'boring' stigma may delay it even longer then it should. Fitch is not going to outright beg but at this time, a stoppage would do wonders beyond his imagination for a future title shot.

Who is our champion if GSP stays in bed all year?