Strikeforce results and LIVE fight coverage for 'Rockhold vs Jardine' on Jan. 7 in Las Vegas

Share All sharing options for: Strikeforce results and LIVE fight coverage for 'Rockhold vs Jardine' on Jan. 7 in Las Vegas 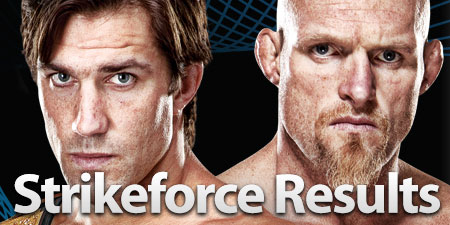 Strikeforce is close to pulling the trigger on its upcoming Showtime-televised fight card from "The Joint" at the Hard Rock Hotel and Casino in Las Vegas, Nevada, on Sat., Jan. 7, 2012.

Check out the current Strikeforce: "Rockhold vs. Jardine" fight card and line up:

Round one: Jardine with a leg kick right off the bat. Jardine now with another leg kick, this one an inside kick. Rockhold with a big flying knee to the body then drops down looking to get underhooks. Jardine reverses and has him pinned against the fence. Rockhold turns him around and gets hit by a knee from Jardine. Rockhold lands a few knees of his own inside the clinch. Three minutes to go. Rockhold is leaning on him and lands a big elbow to the temple of Jardine. Rockhold with a big attempt at a head kick that misses, but he follows up with a spinning back kick to the body that lands squarely. Jardine comes forward and landsa right hand to the head. Rockhold answers with a right cross. The nanother. Jardine lands a left hand to the head and Rockhold responds with a knee to the body. Very fast paced fight, thus far. Rockhold is throwing a ton of kicks. Jardine switches stances and then lands two consecutive leg kicks. One minute to go. Rockhold lands a big looping right hand that lands right behind the ear of Jardine! Rockhold is unloading! He has Jardine wobbled. He's down!! It's all over! TKO win for Luke Rockhold!

Final result: Luke Rockhold via TKO (strikes) at 4:26 of round one

Round one: Lawler comes forward in a hurry throwing punches in bunches. Amagov ducks under the flurry and takes him down. Lawler gets right back up. Amagov doesn't give up on it, grabs a hold of Lawler and puts him back on his back. As Lawler tries to get back to his feet, Amagov works for a guillotine, then throws a blatantly illegal knee to the head of Lawler who was clearly down. Pause in the action as Lawler recovers and Amagov will lose a point. Back to the fight. Amagov fakes a spinning back kick and right afterwards, he is nailed by a flying knee to the head then jumps all over Amagov to unload a barrage of punches! Wow! Fantastic stoppage win for Lawler!

Final result: Robbie Lawler via TKO (strikes) at 1:48 of round one

Round one: Lawal with the jab. Jabs again then goes for the single leg takedown and gets it. "King Mo" working the ground and pound. Larkin is pinned up against the fence and not doing much in terms of getting out of this position. Lawal postures up and looks to throw a punch but is met with enough of an upkick attempt to make him veer off to the side. Lawal on top in side control. Larkin tries to get up but Lawal grabs his leg and puts him back on his back. Lawal is really starting to get off with the ground and pound. Bad spot for Larkin. Kim Winslow stands them up. Good break for Larkin who comes right out with a big right hand that is mostly blocked. Larkin throws a big uppercut but Lawal eludes it. Lawal jabs to the body. Larkin answers with a jab to the head. 10-9 Lawal.

Round two: Lawal feints a shot then backs up. Lawal rushes in again and grabs a leg but eats several punches in the face in the process. Regardless, Lawal is persistent and gets Larkin on his back. Lawal is raining some serious shots and Larkin is not defending. It's over! TKO victory for "King Mo!"

Final result: Muhammed Lawal via TKO (strikes) at 1:32 of round two

Round one: Mein comes out lookign to work the jab. Woodley throws a big right hand and follows up with a kick to the body. Mein still pawing with the jab, backing Woodley up. Woodley throws a sloppy head kick that misses badly. Woodley rushes in, looking for a takedown. Mein defends. Woodley continues to work to get Mein to the mat as the two maneuver for position against the cage. Referee breaks them up and we're back to the center. Mein comes forward, punching and backing Woodley up. Mein throws a big right hand but Woodley ducks under. Mein with an uppercut and Woodley ties up, not liking the standup. Woodley gets the takedown and is in full guard. Woodley, now in half guard, works for an arm triangle choke but ends up letting it go. Mein reverses, but is swept immediately. Woodley on top with just over a minute to go. Woodley with a huge elbow from top position. Mein is able to slip out the back and escape with about thirty seconds to go in the round. Woodley with the outside leg kick. Woodley ties him up. Woodley with a good knee inside the clinch. 10-9 for Woodley.

Round two: Mein with a decent leg kick. Woodley with a huge overhand right to the head. Woodley works for the takedown against the fence and has double underhooks. Woodley with the throw and is now in half guard. Just a minute into the second round. Woodley with a big elbow and a few short punches to the ribcage. Referee cautions fighters to stay busy. Three minutes left. Woodley controlling but not doing a lot of damage. Mein lands a few elbows from his back. Two minutes left and Woodley is still on top. Mein is landing the occasional elbow from the bottom but not showing any signs of escape. We should see stand up soon (if we're lucky). Very odd that this is continuing to go unchecked by the offical. Woodley is essentially laying on Mein and resting. Not an exciting round. Mein is actually appearing to do more damage from the bottom with his elbows than Woodley from the top. A very uneventful round comes to a close. Difficult to score. Probably 10-9 for Woodley for the takedowns and dominant positions.

Round three: Mein throws a big knee to the head, in the process, Woodley runs through it and takes Mein down. Woodley on top and working inside the full guard of Mein. Mein tries to hip escape but he is pushed right back down. Mein continues to be the busier of the two from the bottom position with elbows and punches. Two minutes to go. Mein tries to use the cage to get out but Woodley is smothering him. The fans a re booing and I don't blame them. Mein is working to get an arm and possibly get a kimura. Oddly, the referee stands them up right in the middle of the submission attempt. One minute to go. Woodley ties Mein up, drags him to the cage and is looking to take him down, once again. The round ends with both fighters draped on each other, doing very little until the horn mercifully sounds. 10-9 Woodley.

Round two: Stinson comes right out with a big left hand to the head. Saffiedine is backing up big time. Stinson with a good outside leg kick. Saffiedine with a decent head kick. Stinson, appears unfazed and is still coming forward, stalking. Stinson throws a head kick of his own that narrowly misses. Stinson throws a big bevy of hands that all land and have Saffiedine continuing to retreat. Saffiedine gets a great double leg takedown and is in half guard now against the fence. Saffiedine now in full guard and working some ground-and-pound. Saffiedine still on top and continues to land some damaging elbows and short punches. One and a half minutes to go. Stinson defending but unable to get out from under Saffiedine. The elbows continue to rain down from the top. Stinson clearly bleeding now, having been cut, most likely, from one of Saffiedine's many elbows. Round ends with Stinson eating ground-and-pound, saved by the horn. 10-9 Saffiedine.

Round three: Stinson comes out to start the round with a right eye that is swollen and bruised from the second round's action. Saffiedine starts round with a kick that is low and has Stinson grimacing in pain. Brief pause for Stinson to recover. Back to the action. Saffiedine goes for a takedown and is able to get Stinson on his back, once again. Stinson active on his back looking for an arm but Saffiedine does a good job of keeping him in place and himself out of harm's way. Saffiedine in full guard and continues to throw short punches to Stinson's ribs and face. Stinson trying hard to "wall walk" but Saffiedine is controlling him and having none of it. Three minutes to go. Stinson is helpless on his back and getting bloodier with every passing second that he continues to eat punishment. Saffiedine is really laying it on. Brief few moments of inactivity and Steve Mazzagatti stands them back up. One minute to go. Big knee to the head by Saffiedine answered by a right hook from Stinson. Stinson with a big punch-kick combo. Stinson coming strong, looking desperate and knowing hie's way behind. Too little, too late.
10-9 Saffiedine.