Share All sharing options for: Best UFC/MMA submissions of 2011

The world of combat sports has continued to push the boundaries of shutting down opponents' biological processes in its eternal quest to make everyone watching incredibly uncomfortable.

As such, we’ve been witnesses to a plethora of creative and painful submissions over the past 12 months. But which one was the best of 2011 in Ultimate Fighting Championship (UFC) and mixed martial arts (MMA) overall?

Follow me after the jump for some of this year's top candidates and to cast your vote for 2011's "Submission of the Year:"

As mentioned before, Bellator Fighting Championships has this strange knack for producing amazing moments. In the opening round of its light heavyweight tournament, they decided to go retro. After being put on his back and stuck in side control, Hale tossed his legs over Fekete’s back and, after a strange sequence, latched onto an inverted triangle, sending viewers’ nostalgia glands into full gear as Fekete fell over unconscious and Toby Imada silently applauded. 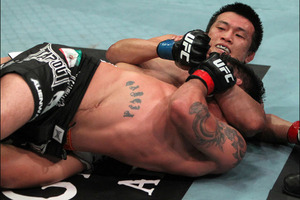 After his teeth-rattling head kick loss to George Roop, the "Korean Zombie" vowed to fight smarter in the future, and looked to utilize his brutal grappling attack against old foe Leonard Garcia. After winning the first round (though not in the sort of horrendously one-sided fashion that is necessary to win a round against Garcia), Jung managed to take his opponent’s back, and after losing a hook, decided to forgo the whole "choking" thing and just do bad things to his spinal column instead. Jung locked up a twister in the waning seconds of the round, forcing Garcia to submit at 4:59 and making Eddie Bravo the happiest man in the room.

Ever since being cut from the UFC, Vinny Magalhaes has been on an absolute tear, claiming gold at ADCC and winning seven of his past eight fights. Against Nemkov, a Sambo specialist fighting out of the legendary Red Devil Sport Club, Magalhaes had to dig deep after an early submissions onslaught failed. In the third round of their tilt, which had the M-1 light heavyweight title on the line, the fresher Nemkov dropped the Ultimate Fighter (TUF) veteran hard, but the latter managed to secure a takedown, move to mount, and lock in a ridiculous gogoplata neck crank that likely had Shinya Aoki taking notes.

You’ve got to hand it to Pat Curran for being culturally sensitive. Taking on Peruvian veteran Luis Palomino in the opening round of Bellator’s featherweight Summer Series tournament, Curran looked better than ever at his new weight, and after getting Palomino to turtle, locked up a dramatically-appropriate Peruvian Necktie, kicking off a spectacular tournament run that was capped off by his incredible head kick knockout of Marlon Sandro. 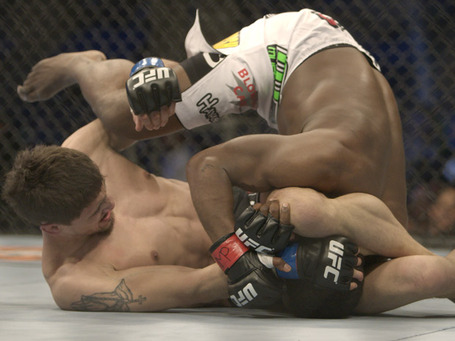 While stream issues left viewers at home unable to watch the first minute or so of their UFC 129 clash, the picture popped in just in time to see the lanky Garza getting his legs pulverized by Jabouin’s kicks, and despite his massive height and reach advantages, he seemed doomed to a long, painful night. Eschewing the traditional countering tactic of standing really far away and letting the short guy pummel the air for a while, Garza moved into the clinch and jumped into a flying triangle, foreshadowing an amazing night of finishes and sending Jabouin down to bantamweight to lick his wounds. 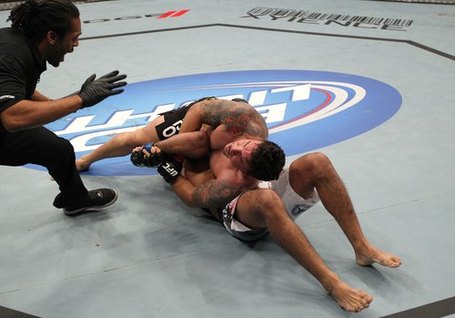 You know what? You all watched this one. You know what happened. I am nowhere NEAR intoxicated enough to write any more about this fight without breaking down sobbing, and I don’t want to have to call the Geek Squad to fix the salty tear damage on my keyboard.

Overall, it’s been a good year for connoisseurs of bending things in the wrong direction. If any contortion aficionados out there have a candidate we missed, let us know in the comments and make sure to check back tomorrow as we evaluate "Fighter of the Year."