In each and every sport there is a discussion between the effectiveness of a stampeding offense versus an impenetrable defense. The old cliché is "unstoppable force meets the immovable object."

In just over a week, on Dec. 30, 2011, the Ultimate Fighting Championship (UFC) will host a larger than life main event for UFC 141 when massive heavyweights Brock Lesnar and Alistair Overeem collide in what will be one of the most anticipated match-ups of the year.

Lesnar will bring with him his NCAA Division I wrestling background. With the explosion behind his 265-pound frame it is hard to stop a man of that size with just agility and technique. Lesnar has always been attributed to having freakish athleticism and deceptive speed and versatility.

With a record of 5-2, Lesnar has consistently fought top fighters but it still relatively young in the sport.

His opponent, Alistair Overeem, will be making his Octagon debut under the UFC banner. At 35-11, "The Reem" is no stranger to competition as he has fought from the light heavyweight division all the way to heavyweight since he started his career as a nineteen year old in 1999. With a primarily kickboxing style, this fight has so many possibilities.

For more on the breakdown follow me into the extended entry.

500+ pounds of professional fighter will occupy the Octagon in the main event of UFC 141. Not only is it one of the largest match-ups in terms of weight, but it may be one of the most important heavyweight bouts this year. Aside from the monumental title fight between now-champion Junior Dos Santos and the former, Cain Velasquez, this fight will be the most relevant to the division and sport.

Overeem is one of the biggest acquisitions for the UFC in recent years. In a year that saw the signing of Jake Shields and Nick Diaz, the potential that comes with Overeem could make him their most pivotal signing.

"Demolition Man" is a K-1 World Champion and has shown that he has the elite kickboxing skills to fight with success against the likes of Badr Hari, Peter Aerts, Remy Bonjasky and Tyrone Sprong. His clinch work has been amazing and his knees have been devastating. 12 of Overeem's victories have come from way of KO or TKO and especially in recent fights, he has shown how dangerous and powerful his striking is.

But let's not forget that Overeem is also a very accomplished grappler.

With a perfect 3-0 record for the ADCC tournament in which Overeem swept the field in 2005's European trials, he has long ago showed he was very versatile. Overeem has submitted 17 of his opponents in mixed martial arts. His "go-to" maneuver has long been a guillotine choke. 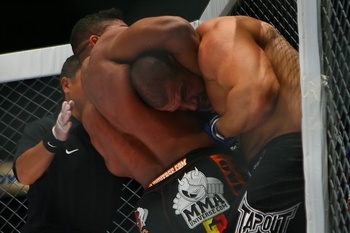 He finished all three ADCC trial matches with the choke as well as eight total victories in MMA coming via the submission.

The choke itself goes hand in hand when fighting a wrestler. In my breakdown of the Guillotine Choke, I detailed that sentiment:

The guillotine choke has long been a death sentence for wrestlers that would shoot in on a submission specialist. It is one of the most common chokes since it's possible to grab the choke from about any position you find yourself in during a mixed martial arts fight.

The guillotine is a choke favorable against wrestlers because it punishes your opponent if they shoot in for a takedown with their head down. While there are other ways to complete the choke, this is often the most common. The most basic way to describe the choke is when you reach around your opponent's neck when it is in range, grasp the choking side hand with the free hand and lift up.

You can complete the choke from a number of positions including the mount, full guard, the sprawl position and even standing up. The choke itself can actually be either a blood choke or an air choke depending on how you are placed onto your opponent's neck. If your forearm pressure is putting force into the wind pipes it will be an air choke and if it is placed more on the arteries you have a blood choke.

Regardless, the guillotine will usually force your opponent quickly into unconsciousness if s/he doesn't tap.

Opposing the well rounded Overeem will be the wrestling based Brock Lesnar. With Lesnar being still so young to the sport it is almost inevitable to imagine that he will once again fall back to his roots and attempt to put Overeem on his back where Lesnar can attempt to get great position and unleash some ground and pound. 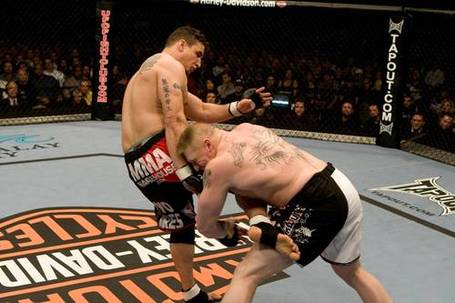 Lesnar has been able to land 12 of 17 takedown attempts.

In each of his seven professional fights he has been able to get his opponent to the ground. With an accomplished striker like Overeem staring at him from across the cage, it is a safe bet to assume Lesnar has not polished his striking game enough to abandon his bread and butter.

But what happens when Lesnar shoots in for that inevitable takedown?

Overeem will be able to counter Lesnar's takedowns with a sprawl and brawl mentality. Looking to keep the fight standing with a strong sprawl will do a lot for how the fight ends up in its conclusion.

A sprawl in technical terms is when the fighter scoots his legs backwards and comes down heavy on the upper back and neck of the fighter shooting in for a takedown. Most often, the "sprawler" arches his back as much as possible and attempts to keep the leverage by staying on his toes.

So many options come from this position that range from submissions to landing strikes to even grabbing the opponents ankle in attempt to transition to the back mount. In this scenario I believe Overeem will be looking for a choke.

Overeem will have a very big factor to use towards his advantage. While Lesnar is a very strong, freak athlete, when being sprawled he will lose leverage. Overeem added with the leverage is already a considerably strong fighter. His tossing of Brett Rogers and back-to-back standing guillotine choke victories visibly displays that to be true.

Overeem, a 250-pound athlete, will be on top of the neck of Lesnar with a knack for finishing guillotine chokes -- and with very powerful upper body strength, the guillotine choke comes a bit more easy. As Urijah Faber displayed in his guillotine choke performances throughout his career, having the ability to torque on this submission with tremendous power makes the hold instantaneously dangerous.

While Lesnar has evolved in the grappling game since his debut in the UFC, Overeem's striking may actually play a factor in a possible submission as well. We have seen Lesnar react poorly in the past to big strikes sustained on the feet and with Overeem's striking acumen it wouldn't be a shock to see punches or knees badly hurt Lesnar.

While rocked, it is common for the rattled fighter to lazily shoot in for a takedown or drop to the ground with the neck exposed. The best example of this would be the Frank Mir choke on a hurt Cheick Kongo. If Overeem is able to stifle the wrestling of Lesnar and land significant damage, then Overeem will have the ability to "leave no room" for Lesnar to escape.

Jiu-Jitsu is always an equalizer in this sport, regardless of the size of an opponent.

What do you think Maniacs? When the evitable takedown comes from Lesnar, will a guillotine choke be a game changer?