Share All sharing options for: Best UFC/MMA knockouts of 2011

Oh sure, we’re always happy to see wars of attrition and gnarly submissions, but nothing beats a good old-fashioned separation of man and consciousness. Thankfully, this past year has been very good to us in this regard, producing several of the most memorable shellackings in combat sport's history.

But which one was the best of 2011 in Ultimate Fighting Championship (UFC) and mixed martial arts (MMA) overall?

Follow me after the jump for some of this year's top candidates and to cast your vote for 2011's "Knockout of the Year:" 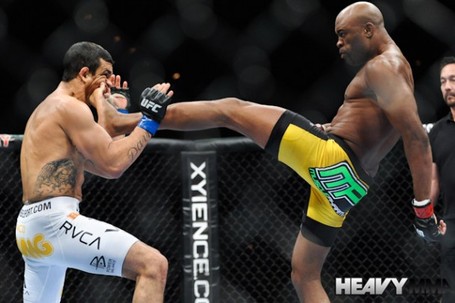 After months and months of waiting, the MMA world finally got its wish: a match up between the two best strikers in the middleweight division. Many questioned how the apparently-invincible Anderson Silva would handle someone with comparable striking prowess, and former champion Vitor Belfort seemed the perfect candidate to answer that question. Unfortunately for Belfort and his supporters, Anderson passed the test with flying colors, blasting his foe with a heretofore-unseen front kick directly to the jaw and shunting him back into the morass of middleweight contenders.

After his brother’s rampage through the featherweight division, there were high hopes for the elder "Pitbull" brother as he made his way into the Bellator lightweight tournament. He took his first major step toward fulfilling those hopes in the first round, knocking out former WEC champion Rob McCullough with nasty punches, but it was his sophomore effort against two-time finalist Toby Imada that really put him on the map. After a short feeling-out process, Patricky Freire absolutely leveled Imada with a flying knee and, as the wobbly Judo specialist attempted to flee, put him violently to sleep with a left hook, establishing his place in the venerable pantheon of Bad Brazilians. 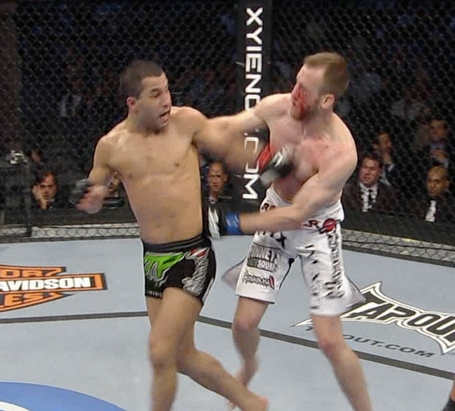 There was a lot of hype surrounding Canadian striker John Makdessi. In his UFC debut against Pat Audinwood, he demonstrated one of the most varied and entertaining kicking games we’ve seen thus far in the Octagon. Against "The Ultimate Fighter" veteran Kyle Watson, he seemed on his way to taking a unanimous decision, but his passiveness despite a massive striking advantage tinged the bout with disappointment. Seemingly sensing this displeasure, Makdessi faked a low kick in the third round and unleashed a gargantuan spinning backfist, leaving Watson out cold on impact and further cementing UFC 129 as one of the craziest events in UFC history. 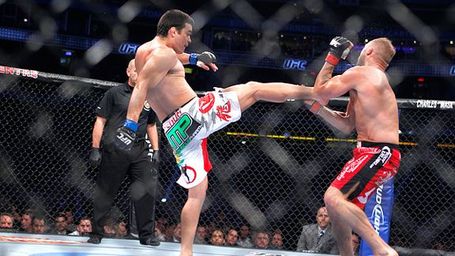 Randy Couture, after putting James Toney to sleep in a laughable mismatch at UFC 118, stated his intention to end his career with a bang against beleaguered former champion Lyoto Machida, who was attempting to bounce back from consecutive losses to Mauricio Rua and Quinton Jackson. In the early going, the aging Couture seemed unable to impose his will, getting picked apart at range and stymied in his attempts to work from the clinch. Things went from bad to horrific in the second round, however, as a jumping front kick straight out of "The Karate Kid" sent Couture’s consciousness (not to mention a tooth) careening into the audience, producing the event’s second KOTY candidate. 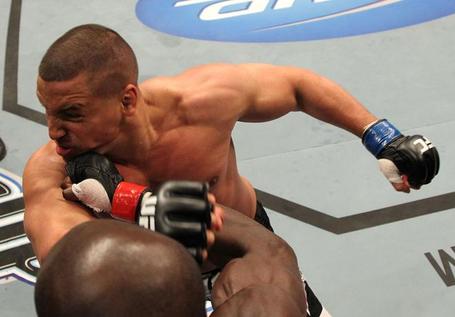 I distinctly remember yelling "He’s out!" at least three times while watching this fight, referring to Kongo each time. To this day, I still have absolutely no idea how he survived and even less of an idea how he managed to muster up the presence of mind necessary to knockout Pat Barry. This was an absolutely absurd knockout, and Cheick Kongo finally got something to be remembered for that doesn’t involve the gratuitous destruction of genitals.

M-1 catches a lot of flak for its management policies, but you can’t deny that they know how to put on a show. Team Quest fighter Tyson Jeffries, after getting brutalized by Magomed Sultanakhmedov, seemed on his way toward redeeming himself, taking down and controlling Guseinov in the early going. This success wound up lasting just over a minute before, returning to his feet, Guseinov uncorked a lethal spinning backfist, leaving Jeffries unconscious well before he hit the ground and damn near giving announcer Mauro Ranallo an aneurysm.

Marius Zaromskis vs. Bruno Carvalho, Rumble of the Kings

Things weren’t looking good for Marius Zaromskis, a notoriously-undersized welterweight taking on a man who, by his own admission, weighed 190 pounds on fight night. Indeed, the size difference was astounding -- it looked like the fighters were two weight classes apart. The "Whitemare," however, laughs at your pitiful "logic," and fired off a Harold Howard-esque somersault kick, catching Carvalho in the side of the head before finishing him off with punches. While Carvalho is protesting the knockout, claiming that Zaromskis greased (and that the kick was illegal and that the stoppage was early), it’s fairly obvious that it’s just sour grapes. It’s not every day you get knocked out by a natural lightweight with a move long-associated with a coked-up Karate fighter.

Yeah, nothing I say here could do this knockout justice. Watch the video. Trust me, it’s worth it.

That about does it.

If your favorite knockout wasn’t on the list, make sure to let us know in the comments section. Also, be sure to pop in tomorrow when we look to determine "Submission of the Year."

To see our 2011 "Fight of the Year" nominees and cast another vote click here.