Share All sharing options for: Best fights of 2011 MMA/UFC

What were the best fights of 2011 in Ultimate Fighting Championship (UFC) and mixed martial arts (MMA) overall?

Yep, it’s the most wonderful time of the year: that time when you sit back on the couch, spike the eggnog and argue with your friends (or frienemies) about the most awesome fights that took place over the past 12 months.

Continuing this grand tradition, MMAmania.com will spend this week looking back at a phenomenal year of combat sports action and, in traditional fan fashion, determine which among the wildly diverse candidates was, definitively, the best.

Join us after the jump for a look at our candidates for 2011's "Fight of the Year" and cast your vote to determine the winner: 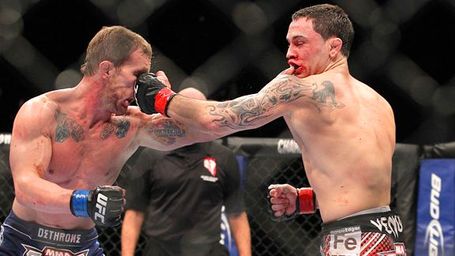 Despite his commanding win over B.J. Penn back at UFC 118, Frankie Edgar’s prospects looked grim as he stepped into the Octagon to defend his title against the only man to ever defeat him: Gray Maynard. The first five minutes of the rematch proved even more disastrous than anticipated, with "The Answer" catching a hard left hook to the jaw and spending the remainder of the round flitting in and out of consciousness, while "The Bully" threw everything short of the kitchen sink at his head. Miraculously, Edgar roared back in the second round, slamming Maynard hard and kicking off four excellent rounds of back-and-forth action. In the end, the bout was declared a draw, setting the stage for a third go-round later in the year and one of the greatest trilogies in MMA history. 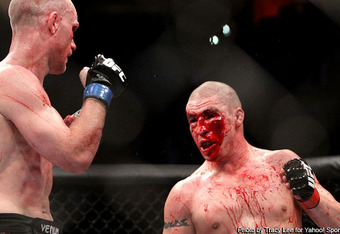 After his horrendously one-sided massacre against B.J. Penn and subsequent drubbing at the hands of John Hathaway, many had written off Sanchez as yesterday’s news. In his UFC 121 throwdown opposite Paulo Thiago, however, he proved he was far from done, and after shaving his head and rechristening himself "The Dream," looked to re-establish himself as a contender in the talent-laden 170 divsion. Kampmann, fresh off a frustrating split decision loss to Jake Shields, had no intention of being a stepping stone, however, battering Sanchez in the first round of their bout. The fight quickly devolved into a hellacious brawl, both men scrapping their hearts out until a bloodied, unrecognizable Sanchez took the unanimous decision and both men took home a well-deserved bonus. 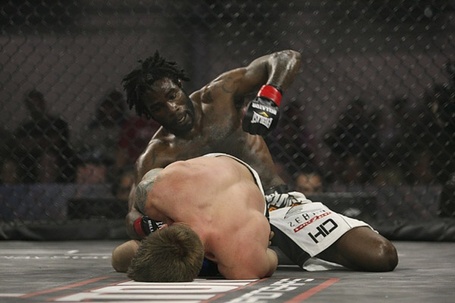 Ever since Toby Imada defied the odds, logic and basic human anatomy to choke out Jorge Masvidal, Bellator Fighting Championships has gotten a reputation for producing some of the most spectacular moments in MMA, often from the last places you’d expect. This lightweight throwdown in March was no different, as undefeated Argentinian Nazareno Malegarie took on American wrestler Daniel Straus, who survived an onslaught of submission attempts to take a unanimous decision after three rounds of highly-competitive action. 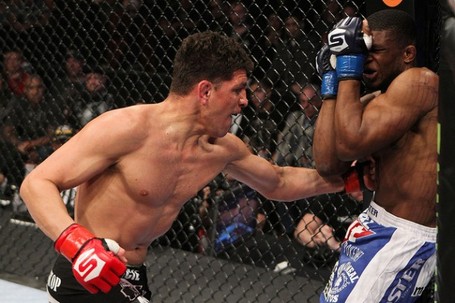 Neither Diaz nor Daley is known for putting on boring fights, but nobody could have anticipated the insanity that this match up would produce. Both men came out like a house on fire, with Diaz coming the closest to being knocked out he had since his first fight with Jeremy Jackson and Daley resorting to a takedown attempt after being cracked by his smack-talking foe. In the end, the body attack of Diaz was too much for Daley, and he laid into the turtling British striker and knocked him out for the first time in his career in the waning seconds of the first round. Quality and quantity all packed into less than five minutes. 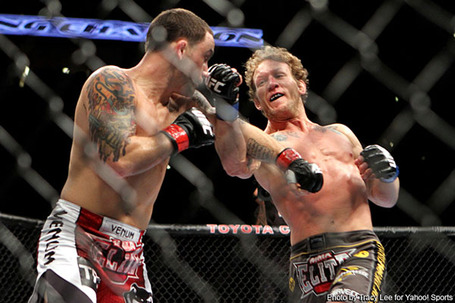 The third and final scrap between Edgar and Maynard had quite a lot to live up to and did so with gusto. A huge Maynard uppercut had Edgar on the ropes in the early going, leaving the champion scrambling for a takedown, but unlike the last time, Frankie kept his wits about him and, as soon as the bell rang for the second round, immediately went to work. "The Bully" found himself unable to replicate his early success, nor could he get Edgar to the ground, and unfortunately for the beleaguered challenger. "The Answer" decided to flip the script even further in the fourth round. The champion rocked Maynard as the latter was getting to his feet, pursued him as he tried to back away into the cage, and finally put his lights out with a hard right hand, capping off an amazing trilogy and putting to rest accusations that he was nothing but a point-fighter. Lightning truly did strike twice. 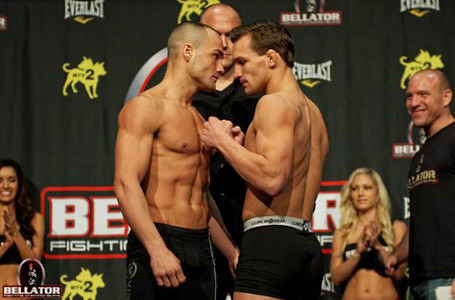 Many questioned the veracity of Bellator’s marketing of Alvarez as the number one lightweight in the world, but one would be hard-pressed to deny that he had a knack for producing some of the most spectacular fights in the sport. His brawls with Joachim Hansen and Tatsuya Kawajiri are the stuff of legend, and his fight with Chandler proved no different. The notoriously knockdown-prone Alvarez was rocked in the early going by the latest tournament winner and, for a brief time, it looked as if even his notorious resilience would finally fail him. In the third round, however, he fired back, forcing Chandler against the cage and brutalizing him with hard punching combinations. Unfortunately for the long-reigning champion, Chandler would not be denied, and crumpled Alvarez with punches before taking his back and securing the rear-naked choke, pulling off a huge upset and providing a Hollywood ending to a fantastic bout. 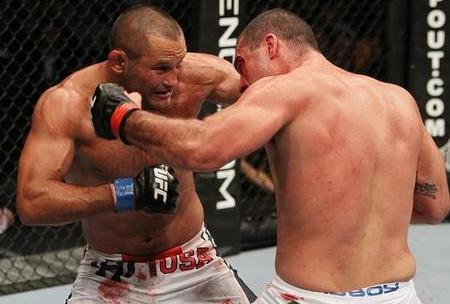 Later that same night (Nov. 19, 2011) as the Alvarez-Chandler barn burner, Pride FC veterans Dan Henderson and Mauricio Rua, not to be outdone, put on one hell of a show in their five-round throwdown. For the first three rounds, it seemed like Rua was simply unable to handle the colossal power of the reigning Strikeforce champion, as he found himself crumpled on multiple occasions by Henderson’s legendary right hand and was very nearly stopped in the third round. Once they went into the championship rounds, however, "Shogun" proved to have the heart of a champion, taking advantage of Henderson’s emptying gas tank to put him on his back and lay down the hurt from mount, although he found himself just too exhausted to put Hendo away. In the end, Henderson walked away with a unanimous decision, and both men proved themselves the toughest sons of guns this side of the Mississippi. 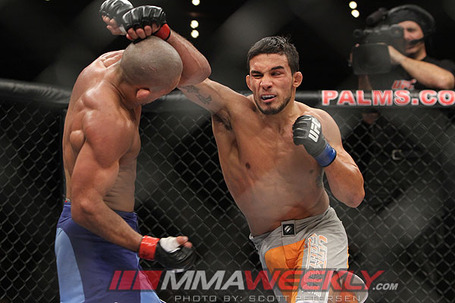 From his Henderson-esque pasting of Jesse Newell in the elimination rounds to his nigh-instantaneous knockout of Steven Siler on the show proper, Greg Jackson product Diego Brandao proved himself one of the most exciting TUF products in recent memory, combining huge power with a near-psychopathic drive to obliterate everything in his path. Dennis Bermudez, who had upset the highly-touted Jimmie Rivera to get into the house, had no intention of becoming another piece of Brandao’s highlight reel, and after surviving a knockdown and suplex, flattened the overzealous Brazilian with a right hand counter and pounced. In an astounding show of heart, Brandao weathered the onslaught and rolled directly into a bone-crushing armbar, ending one of the best rounds of MMA this year with a bang.

So, Maniacs, what was your favorite slobberknocker of the year? What did we miss?

Make sure to cast your vote and then argue the reason(s) behind it belligerently in the comments section below. Remember, too, to join us tomorrow as we look for 2011's "Best Knockout."