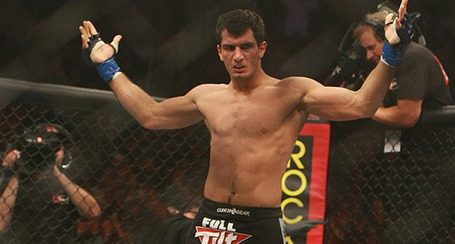 "The Dreamcatcher" looked to play the role of "Dream-squasher" as he entered into the cage with "OSP," who came into tonight's match-up on an eight-fight tear of a win streak.

Mousasi, still the current DREAM Light Heavyweight Champion, won his last fight in impressive fashion when he scored a TKO victory over Hiroshi Izumi at DREAM Fight For Japan in Tokyo, Japan on July 16.

St. Preux, the former University of Tennessee football player, was making an effort to prove that he belongs in this sport and can compete with the elite fighters in the business.

Throughout three rounds, Mousasi proved to be too much for St. Preux to handle as he was able to use his experience and his ground-and-pound abilities to notch the unanimous decision win.

Mousasi came forward aggressively, right away, looking to stalk St. Preux. He made a statement early on by nonchalantly catching the first kick that St. Preux threw at him.

Mousasi landed several good combinations early that had St. Preux on his heels.

Shortly after one such combination, Mousasi was able to secure a takedown and get St. Preux on his back.

Not where he wanted to be.

It wasn't long before Mousasi was able to get side control and punish his young opponent with some brutal ground-and-pound.

St. Preux looked to have no answer, as he helplessly took countless elbows to the head and body.

Out of nowhere, St. Preux reversed Mousasi and looked to be in good position, only to find himself reversed and stuck inside the crucifix position.

The first round ended with St. Preux eating punches and being saved by the horn.

St. Preux shot for a takedown at the beginning of round two, but was stuffed effortlessly by his more experienced opponent.

In a matter of seconds, Mousasi was able to sweep "OSP" and had him right back where things left off at the end of the first round.

The elbows and ground-and-pound punches began to make their way through in higher volumes as St. Preux looked completely overwhelmed.

After a referee stand-up, St. Preux was able to land a takedown of his own and was able to get side control with about a minute left in the round.

Mousasi was able to escape and ended the round back on top, clearly winning round two.

St. Preux came out in the third round, looking desperate and knowing he need to finish his opponent if he had any chance to win.

Two minutes into the round, St. Preux was able to get a takedown and secure full mount. Unfortunately, he wasn't able to do much with it, as Mousasi was able to get free and back to his feet.

St. Preux appeared to be close to securing a d'arce choke at the final horn, but it was too little, too late.

Remember to check out MMAmania.com's ongoing coverage of the Strikeforce: "Melendez vs. Masvidal" main card by clicking here.