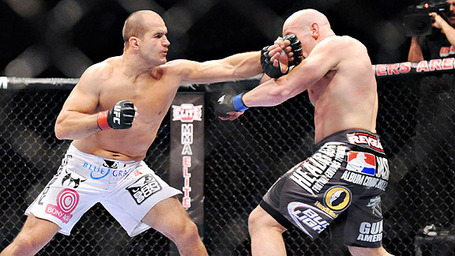 On Nov. 12, 2011, Ultimate Fighting Championship (UFC) will make a giant leap toward carrying the sport of mixed martial arts (MMA) mainstream when it showcases a major world title fight, Cain Velasquez vs. Junior dos Santos, live (and free) on the FOX television network.

UFC on FOX 1: "Velasquez vs. dos Santos" will be the biggest heavyweight clash the sport has seen, as well as the first time two heavyweights that are ranked number one and number two, respectively, will compete for a title since Pride FC heavyweights Fedor Emelianenko and Antonio Rodrigo Nogueira collided almost seven years ago.

Since the birth of the sport, we have seen several martial arts disciplines invade and take it over, whether it's the Brazilian jiu-jitsu of Royce Gracie to the wrestling of Mark Coleman to the kickboxing of Mirko Filipovic. From there, it has been an art to integrate all forms of combat to become well rounded enough to compete at any level against any opponent.

MMA has a very diverse audience and most non-fringe fans today are very informed when it comes to knowing what is happening when two combatants step inside the Octagon. Whether it is grappling and submissions like we discussed yesterday, or whether it be the simple, subtleness of the striking game.

With striking phenom Junior Dos Santos and heavy-handed Cain Velasquez fighting on Saturday night, this is as good an opportunity as any to look at some of the most used strikes we may witness on primetime television from our living rooms.

Follow me into the extended entry for the breakdown, analysis and .gifs included:

Every MMA fight starts standing, so all fighters must have at least the most rudimentary fundamentals down. Whether they study boxing, kickboxing or Muay Thai, the fighters have studied some sort of striking-based discipline.

Boxing is centered on the usage of just your hands as offensive weapons in addition to footwork and head movement as your defense. Fighters like B.J. Penn and Nick Diaz are shining examples of fighters who rarely throw kicks, but have a very boxing-oriented offensive attack. Jabs and straights are the main focus of these types of fighters, as well as evasive techniques to slip punches and find homes for their counters.

Kickboxing is built around utilizing your legs as additional weapons. Kick strikes to the head, body and legs focus on really neutralizing your opponent and allowing you to be versatile with two more limbs at your disposal. Fighters like Pat Barry and Cheick Kongo are just two of many fighters who have very strong kickboxing.

Muay Thai and Thai boxing is the art of eight limbs. The arts foundation is on the idea that each limb should be used in combat, not just the feet and hands, but also the knees and elbows. Anderson Silva and Mauricio Rua are two vicious Muay Thai fighters. As a result, they have more in their arsenals than most strikers being that they have much more options to use striking.

Dos Santos will main event the inaugural fight card on FOX this weekend. The number one heavyweight contender is on a tear as he has never lost since entering the UFC ranks. He has won eight fights straight overall, seven of those under the promotion dating back to Oct. 2008.

"Cigano" has outstruck each and every opponent during that time, including finishing five of those foes violently with strikes. Notorious for being considered one of the most dangerous strikers in the world, he will look to pry the title from current champion Cain Velasquez.

To do that he will need to unleash his striking arsenal on the champion.

Easily the most important strike in the combat world of striking is the jab. The jab is a lead punch that is thrown with your lead hand. It is the strike that lands quickest as the hand is usually the closest to your opponent. While it lacks the power of other strikes, its effectiveness is unparalleled to any other strike (For a very detailed breakdown on the jab, click here and here).

Dos Santos fights out of the orthodox stance, which means his left leg and leg arm lead his body and his right side is angled backward. With the right hand further back from the lead hand, the added space allows more space to create more force and velocity. But, before talking too much about power, the lead hand is the most important hand for a fighter.

As you can see, dos Santos is snapping his lead left hand straight and parallel to the ground toward the face of his opponent. The lack of space between the hand and the face of the opponent makes the strike the hardest to anticipate and block. Even though it lacks power, it often accumulates damage as the fight wears on and can even cause damage such as cuts and swelling.

What dos Santos also does with these jabs is set up other strikes. With the jab in your face it is hard to anticipate what comes next. When you throw a strike immediately after the initial strike it is called a combination, which is what dos Santos delivers in this clip. He throws additional strikes, while stuffing the jab as far as he can into his opponents face, using it to blind him for the next punch, as well as get an idea as to the range he will need to throw it.

Such a subtle strike, with such significant implications.

The next series of punches usually thrown are the cross and the hook. The cross will usually follow a jab and is thrown with the rear hand, the power hand, and it will take a straight path to your opponent immediately behind the jab. A hook will be thrown by either hand and will usually be a combination finisher as it is thrown with a hooking motion from the side of your posture. It typically lands on the jaw or the temple at such an angle that it can render your opponent unconscious.

Dos Santos, however, has another devastating punch in his arsenal.

In complete contrast to the jab, the uppercut is a strike that has violent power and is thrown with a longer wind up. It is rarely a strike you lead with, yet it is actually the most effective as a closing strike to a combination.

As you see dos Santos throws an angled jab, which could also be a lead hook, and follows up simultaneously with the uppercut. The strike is thrown in a sling shot motion from underneath the shoulder and parallel with the hips. The fist starts very low and is thrust in an arching motion upward and will more often than not land on the chin if not the nose. Such a powerful punch has put the long lists of opponents for dos Santos in worlds of troubles, including the likes of Mirko Cro Cop, Fabricio Werdum, Shane Carwin and the pictured Roy Nelson.

The strike is so dangerous for several other reasons. Against a power striker like dos Santos, it can at times become a habit to hide the head behind your gloves and make a ducking motion. Sometimes fighters with wrestling backgrounds like Velasquez make the habit of ducking under jabs and shooting for a takedown. Both are opportunities to land the uppercut.

Dos Santos doesn’t strictly use his hands either. A very effective kickboxer, the challenger also has showcased more of his arsenal.

Throwing a head kick is very energy sapping; however, the power behind a kick often is a superior strike in terms of power. It is very common to have a kick blocked, but the power tends to still make a mark on the person you are kicking.

When you are attempting to avoid jabs and straight punches, it is easy to forget to protect the side of your head. The head kick ideally will land on the side of the face if not behind the ear and will cover a lot of area if the entire foot connects. In most instances the head kick will land with the shin which will deliver much more devastating power. Dos Santos here lands a kick that is partially blocked, but as you can see, the power still does damage and throws Carwin off balance.

Mixing up strikes only makes it harder to counter for the opponent and harder to get into a rhythm.

Before Junior dos Santos attempts to showcase his striking in his title fight during the main event of the evening, the undercard fighters will look to make their mark on this historic fight card.

One of those fighters is Cub Swanson, a fighter who hasn’t been able to stay healthy since WEC 52 where he won a solid fight over a fighter who has found some success since their fight under the UFC banner.

Swanson highlights very effective elusive maneuvers in this small clip of his fight with Mackens Semerzier. He moves his body around, making for a very difficult target to hit. He wings big punches while moving to avoid the counters.

What he also does is show a technique perfect leg kick. This is another strike that is unheralded at times and is virtually the jab of the legs (For a break down of leg kicks click here).

Swanson plants his feet and launches his rear leg in a chopping motion directly at the area above the knee and below the mid-thigh. The strike not only stings but accumulated strikes make walking very difficult and takes the explosion out of strikes and takedowns. It is a case where an offensive strike actually works defensively, too.

Make sure to remember the simplest of strikes such as the jab and leg kick end up being game changers as they can dictate the pace of fights and can alter the direction with one well timed combination set up with one of these strikes.

For more on striking breakdowns, this fanposts are focused around the striking aspect of mixed martial arts. The body shot, range striking and Muay Thai basics.

That is all for now fight fans, these are just a few of the more common strikes you may see Saturday night for the UFC’s inaugural event on FOX. To read a detailed breakdown of the most frequent submission attempts that you may see on Saturday night click here.