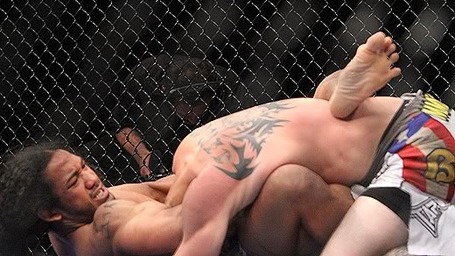 In less than one week (Nov. 12, 2011), Ultimate Fighting Championship (UFC) unveil its premier brand of mixed martial arts (MMA) for the world to see on the FOX television network.

UFC on FOX 1: "Velasquez vs. Dos Santos," which will take place from the Honda Center in Anaheim, Calif., is significant for the sport, featuring the biggest and most successful promotion putting its best foot forward to finally make it mainstream.

For more than one decade, UFC has shined a bright spotlight on many of the world’s finest athletes in their respective combat disciplines. It was one core martial art, however, that rose above the rest in the early days thanks to Royce Gracie and his family's style of Brazilian jiu-jitsu.

Most non-fringe fans today are very well versed and informed when it comes to knowing what is happening when two combatants begin to grapple, whether it is on the feet or on the mats. However, as we usher in a new audience from the network television broadcast of the promotion's heavyweight title fight between Cain Velasquez vs. Junior dos Santos on Saturday night, it is a great opportunity to take a look at some of the most often used submissions we will see executed inside the Octagon in primetime.

Follow me into the extended entry below as we look at the most frequent submissions in MMA, .gifs included:

Submissions can come in several ways, some quick and straight forward, while others require some set up and may be flashy. The bottom line is they almost all restrict breathing or cause pain in some limb of the body.

Let's take a look at some of this Saturday’s competitor’s using several of these techniques.

Fringe contender Ben Henderson will look to solidify himself atop the lightweight rankings when he faces fellow contender Clay Guida on Saturday night. Henderson is a former World Extreme Cagefighting (WEC) champion who holds several notable victories and has a knack for the grappling game as it compliments his amazing physical dexterity and flexibility.

With a 14-2 record, "Smooth" has eight submission victories with half of them coming via guillotine choke. Very well rounded, Henderson is a black belt in Taekwondo, a brown belt in Brazilian jiu-jitsu and a former NAIA Division I wrestler.

Following his decision win to become the Interim WEC champion, Henderson would face the promotion's top lightweight Jamie Varner. Varner, a fellow wrestler and outstanding grappler, would offer Henderson his stiffest test up to that point in his young career.

Varner would eat a very powerful knee to the abdomen as he shot in for a takedown, which allowed Henderson to use his powerful base and balance to remain upright. As Varner drove Henderson backward, he left his head and neck in a position where Henderson could slip his left arm underneath the neck of "C-4."

As he got his left arm underneath the chin of Varner, Henderson clutched the free hand, which was coming over and through the arm pit, making this choke an "Arm-In Guillotine" (To read up on this choke in depth click here), meaning the arm of Varner was stuck within the clutch Henderson had between his hands.

Henderson would jump onto Varner, establishing a standing guard position as he wrapped his legs around the body, which made it more difficult to escape since a slam would land Varner in the same position.

The choke itself is very useful when facing wrestlers, as the guillotine is often available on wrestler’s who shoot in for takedowns. It is also very fight-altering because the choke -- even if it isn’t finished -- saps loads of energy from the lungs of the opponent.

Before the main event on the broadcast on Saturday night, an upcoming prospect, Pablo Garza, will look to keep his perfect record (3-0) under the sport's brightest lights intact with his return to the Octagon against fellow prospect Dustin Poirier.

On the heels of a highlight worthy submission, Garza could very well duplicate the wizardry he showed in his last bout.

This sort of technique relies on tons of athleticism, fast twitch muscle fibers and trust in your own skills. It is a high-risk, high-reward type of move and the consequences could lead to a slam and (technical) knockout.

"The Scarecrow" starts with some work from within the clinch. He sees an opening with his opponent Yves Jabouin’s right arm trapped low enough to get his left leg over it and atop that shoulder. That is the key to setting up the submission hold.

As Garza falls backward, he lands on his back and Jabouin is now trapped inside a triangle choke. (For more on this choke specifically click here. For more in-depth analysis on the general choke click here.)

The choke itself is complicated -- the pressure applied by the left leg over the neck of Jabouin and the free leg is locked in over the ankle in the crevice of the knee. This pressure causes Jabouin to essentially choke himself with his trapped arm/shoulder. While locking in the choke, Garza reaches under Jabouin’s leg to take away mobility and any opportunity to escape.

The triangle choke is a favorite amongst lanky-long limbed fighters. Garza uses the surprise element of fighting to catch an opponent off guard, fighting is much like a chess match and Garza set up his "checkmate" very well.

On the undercard of the UFC on FOX event, WEC veteran Mackens Semerzier will fight in second bout since the UFC absorbed the WEC promotion. He looks to stay on the winning path, a road Semerzier hasn’t walked down since upsetting highly touted Brazilian jiu-jitsu ace, Wagnney Fabiano, more than two years ago.

In his first fight under the UFC banner, Semerzier would impress with a dominant first round stoppage victory.

The most dominant position you can achieve in grappling is the back mount. When you are able to wrap yourself around your opponent on, while on his back, it extremely limits the options he has to offer. You won’t be able to offer any offense if at all, your defense is limited to fighting off hands and arms trying to choke and pry for arm locks. Most people choose to create a scramble, but that also is risky at several times it lands you in an even more vulnerable position.

Semerzier is sitting snuggly behind opponent Alex Caceres in the .gif above, looking to find a home for the rear naked choke (For the in-depth breakdown of this choke click here). The choke will require Semerzier to get his forearm under the chin and tightly on the throat, from there that choking hand will grab onto the free hand to allow leverage and strength to take over.

Semerzier places the right arm as the choking arm and connects it to his left bicep. The left hand now goes atop Caceres in a defensive posture, preventing Caceres from loosening the hold. As you can see, Semerzier also has Caceres' body controlled with his legs, too, which prevents a roll to escape the danger of the choke.

Mike Pierce will rematch a former foe, Paul Bradley, in the middleweight division on the undercard alongside Semerzier. He will bring in his wrestling pedigree as he will try to once again attempt to make a run to contendership.

Even though only one of his 12 wins have come by way of submission, that lone submission victory is a perfect example as to how dangerous submissions can be.

Pierce is lying in a very dominant position, with the upper body heavy on the on the body of his opponent. While his leg is stuck in a half guard, he still attacks the right arm. Arm locks that require you to stay heavy on top is a wrestler favored technique because their background really focuses on staying on top, being heavy and using their leverage to gain the advantage.

With his left hand clutching the right wrist, he is attempting to execute an arm lock submission to secure victory. He has so many options at this point as he can try for a kimura or Americana (For more on those click here), but instead he opts for a straight arm bar.

Pierce uses the off hand that isn’t grabbing the wrist to clutch onto his own wrist once it is snaked through under his opponents arm. That position that Pierce’s arms and hands create apply a lot of tension onto the elbow. As Pierce continues to straighten the arm and torque it outward, the consequence of not submitting will be a dislocated elbow or broken arm.

He just makes a statement with an arm bar (For the breakdown on the submission click here).

That is all for now fight fans. These are just several submissions we may see this Saturday on the inaugural UFC on FOX event.