UFC 138 results recap: Winners and losers from 'Leben vs. Munoz' on Nov. 5 in Birmingham

Share All sharing options for: UFC 138 results recap: Winners and losers from 'Leben vs. Munoz' on Nov. 5 in Birmingham 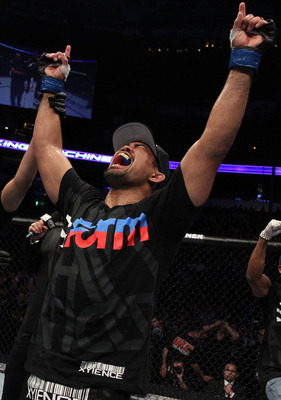 Ultimate Fighting Championship (UFC) just completed another fantastic weekend of fights with UFC 138: "Leben vs. Munoz," which took place at the LG Arena in Birmingham, England on Sat., Nov. 5, 2011.

As usual, there were knockouts, submissions and fights that ended up having to be decided by the judges. We oohed. We aahed. We watched fights on Facebook, then waited several hours to watch the rest of them via tape delay on Spike TV later in the evening.

All in all, the main card delivered, despite the pre-event groans and moans from mixed martial arts (MMA) fans and pundits alike who thought it was rubbish.

Now that we've had time to fully digest what has happened and witness the aftermath in its entirety, it's time to re-visit the mountain-tops and the valleys of the UFC's most recent offering. We have laid out the big winners and the lowliest of losers from UFC 138: "Leben vs. Munoz" in the extended entry below.

Mark Munoz -- This is a no-brainer, folks. Munoz has been called overrated (not by us, of course). His three-fight win streak could have been called a fluke. Some had even said he wasn't facing top caliber guys. He's just a wrestler, right? Not so fast. At UFC 138, Munoz took some huge left hands from "The Crippler," but he kept right on moving. He didn't panic, he didn't stray from the game plan. He was calm, cool and collected. People are going to say that he didn't beat Chris Leben at his best. True or not, that's not Munoz's problem. He beat who was placed in front of him and decidedly so. He probably won't get his requested title shot next, but he's knocking on the door. One more impressive victory over a top five contender and his friendship with current middleweight champion Anderson Silva may just be put to the test.

Michihiro Omigawa -- I understand his fight was not one of the most fun to watch on the card. He didn't get a finish or make any highlight reels with crazy, athletic moves we've never seen before. The reason this was such a big deal was because of the desperation involved. He shouldn't have lost to Darren Elkins. Let's call a spade a spade. He won that fight. Regardless, his record shows a big "L" on it. You can't be a prospect forever. At some point, the UFC expects guys to earn their way off the Facebook "Prelims." A loss to Jason Young would have likely sent Omigawa packing. To boot, "Shotgun" is no sucker. The guy is solid. Omigawa used solid grappling and top control to do what he had to do to get the victory. His back was against the wall, but he should have some breathing room now. Maybe Japanese MMA isn't dead yet?

Thiago Alves -- Alves was favored coming into this fight. He was facing a guy, in Papy Abedi, who was making his Octagon debut. No big deal, right? Rewind a bit. Coming into this bout, Alves had lost three of his last four fights (and the win came in a razor-thin decision victory over John Howard, a fighter who is no longer employed by Zuffa). He's had well-documented problems making the 170-pound weight limit. It seemed, for a moment, that he had trouble again this time (before it was revealed that the problem had to do with an improperly calibrated scale). Like Omigawa, Alves needed a win. Abedi had nothing to lose and everything to gain. He came out with his head high and chest puffed out. He wanted to tame the "Pitbull" and embarrass him in the process. Alves walked through some big shots, returned fire, put himself in dominant position then finished his opponent, looking like the Alves of old. Don't get it twisted. This doesn't put him back in title contention or anywhere near it, but it does get him off the hotseat for a minute.

Terry Etim -- On Saturday night, Etim landed the second fastest guillotine submission in UFC history -- Oleg Taktarov holds the official record with a nine-second guillotine submission victory against Anthony Macias -- when he grabbed hold of opponent Eddie Faaloloto's neck and got him to tap with only 17 seconds gone off the clock in the opening round. It was fast. It was beautiful. It was shocking to watch. I had to rewind it several times because I almost didn't believe it. Standing guillotines are rare. This was a different animal altogether. Afterward, Etim was awarded the "Submission of the Night" award for the fourth time in his UFC career. Look, I'm not trying to tell fighters how to handle their business. I'm just a writer. But if you're a UFC fighter and you have to step into the cage with Etim, you might wanna watch your neck. Just saying.

Renan Barao -- Brad Pickett was the hometown hero. He came in with a ton of hype. He beat Demetrious Johnson, remember? Barao had everything against him, including the crowd. Technique can sometimes trump all else. Barao has got some wicked technique. For little more than four minutes, Barao and Pickett exchanged furiously. It was like watching a high-level table tennis match, except the ping-pong balls were 135-pound men in this instance. Barao was a man on a mission. He had an answer for everything Pickett threw at him. Everyone knew Barao had a slick ground game, but on Saturday night, he showed that his striking abilities are no joke, either. Barao is now unbeaten in his last 28 fights and hasn't lost since 2005. Bantamweights: You're on red alert. This guy is for real.

Chris Leben -- It pains me to have just typed his name. I love Leben. He always brings it. He's given fans some amazing fights in his career and has earned a ton of faithful followers in the process. On Saturday night, he just didn't have his "A" game. Rumors are now flying around that he may have had a drastic 21-pound weight cut in the 24 hours leading up to his fight. If that's true, it's hard to blame him for not being able to perform at his best. The flipside of the coin is that he's a professional fighter. If he really had to cut that much weight in that small a window of time, that's just insane. One way or the other, he didn't properly prepare for this fight and that's just sad. "The Crippler's" biggest enemy has always been himself. He's not a loser in the big picture. I believe he'll rebound. But, Saturday night will certainly be a night that Leben regrets for a long time to come.

Eddie Faaloloto -- In three UFC fights, Faaloloto has been finished each time. Two of the three losses came in the very first round. At some point, your game needs to evolve to the state where your name on a card doesn't equal some sort of fight bonus for the guy who is fighting you. It's too bad, but the fight game is cutthroat and Dana White doesn't play. You lose three fights in a row, you generally get your walking papers. It may be time to look into some smaller shows again to re-invent his game to the point where it's UFC-worthy.

Spike TV -- This was a great card. It would have been awesome to see the whole thing in its entirety, uninterrupted. But egos were involved and Spike and the UFC seem intent on sticking it to each other. The UFC didn't promote this card. Spike split it up and made it hard to watch. The only people who seemed interested in selling the event were the fighters themselves. Ratings wise, UFC 138 did alright, but it could have done much better. The UFC will be fine, but I feel like Spike hurt itself more than they hurt Uncle Dana and the Ferttita brothers with its "strategy."

That's all we got. Tell us what we got wrong. What does your list of winners and losers look like? Bring on your comments, good or bad. We can take it.