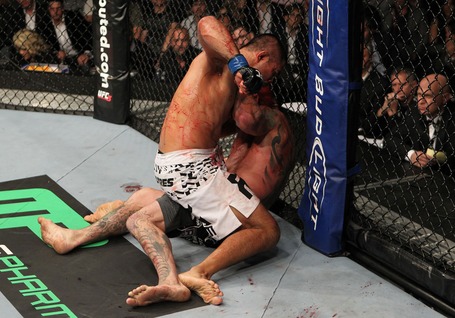 This FanPost contribution was edited and promoted by MMAMania.com. It is the opinion of the fan and does not necessarily reflect the sentiments of the site or its staff.

UFC 138 has come and gone with what has to have been one of the most anti-climactic finishes since Randy Couture lost his light heavyweight crown to Vitor Belfort with an eyelid cut. After two rounds of mainly sluggish wrestling in the main event, Mark Munoz managed to open up a cut over the eye of Chris Leben, leading to a referee stoppage after the "Crippler" admitted he couldn't see out of it.

It's puzzling that Leben and Munoz, two men with known cardio issues, were selected as first people to compete in a five-round non-title fight. If ever there were a more deserving contender for that honor, it would have been Nick Diaz vs. B.J. Penn, in which the former Strikeforce champion likely would have used his superior cardio to put away the Hawaiian prodigy in the fourth round.

By contrast, in last night's (Nov. 5, 2011) main event at the LG Arena in Birmingham, England, Leben was gassed by the end of round one.

Leben is a man who has been well-known as having granite blocks for hands and an iron chin since 2005; however, he refuses to address his two biggest weaknesses. And if you don't know what those are, watch UFC 138 again and see how Leben was once again largely defeated by his own inadequacies.

It was in 2005 that we learned Leben is susceptible to being cut open with ground-and-pound because of  poor takedown defense and wrestling, as well as having suspect cardio. He learned that in losing to Josh Koscheck on The Ultimate Fighter, who laid on Leben for the decision win, before failing to keep Kenny Florian's sharp elbows from winning him redemption.

In the six years since that first TV series, Leben has failed to address those two concerns. He gets taken down easily, as we saw even against Yoshihiro Akiyama, who would have won a decision at UFC 116 if it had not been for some nice last-minute jiu-jitsu. And other than his tenacity, his cardio has been a problem in high intensity matches like the one fought against Munoz for the first five minutes of UFC 138.

The solution should be simple.

Leben has bricks for gloves, which means that if he applied himself Chuck Liddell-style to becoming a counter-takedown specialist, and trained cardio to the point where he can sprint for 25 minutes without getting tired, the rest should take care of itself.

He has highlight -reel clips of knocking out Terry Martin, Wanderlei Silva and Aaron Simpson. But those wins were due more to the fighters' willingness to step into Chris' left hand than the reward that is diligent practice of his weaknesses. Intelligent fighters, though I am loathe to say it, such as Michael Bisping, have had little issue with Leben because he fights predictably and his weaknesses are apparent.

At 31 years old, Chris doesn't have much time left to reinvent himself. But at this stage it would probably be wise to stop the jiu-jitsu training and start training wrestling and cardio. If he can stuff takedowns and keep opponents on the end of his punches, like Diaz, he can be a ruthless killer in the middleweight division.

But I'm not sure Leben possesses the patience in the cage for such a regimen. After all, despite the fact he was getting worked against the cage and taken down, he engaged in the clinch with Munoz at every given opportunity. And when he did swing at Munoz, they were lazy and looping punches that brought his momentum forward, leaving him wide open to counter punches. In the five years since Anderson Silva made a mockery of Leben's rushing style, the man has seemingly learned nothing.

The sad thing Leben is an inherently exciting, powerful, intriguing fighter who makes fans want to root for him. The frustration has always been that the fans never know which Leben will show up to a fight -- the one who was knocked out easily by Brian Stann? Or the one who brutalized the Axe Murderer?

Regardless, it's clear that this old dog needs to learn a new trick, or two, if he is indeed serious about being considered a legitimate contender.