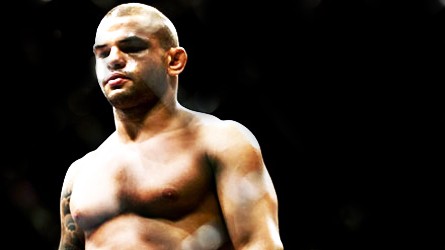 Despite the lack of hype surrounding the UFC 138: "Leben vs Munoz" event, going down today (Fri., Nov. 5, 2011) in Birmingham, England, believe it or not a former title challenger was on the card.

That would be welterweight warmonger Thiago Alves, who welcomed Swedish judo specialist Papy Abedi to the Octagon. "The Pitbull" came under fire before the bout for missing weight on his first attempt (though he later made the 170-pound limit) and this was widely considered a must-win for the Brazilian knockout artist.

Win it he did ... and by submission no less.

Alves was his usual aggressive self and after landing a few solid shots that had his opponent teetering on the brink of unconsciousness, he decided to lock in a rear-naked choke and force the tap inside the first round.

Alves opened aggressively, firing off those vicious kicks he's become so famous for. Abedi stood right in the pocket and traded shots with him, though, never backing down.

In fact, the Swede quickly became the more aggressive of the two, walking down the Brazilian with a confidence not usually seen from Octagon debutants.

Of course, that aggressiveness can be costly and it surely was when "The Pitbull" landed a few huge shots to flatten Abedi. And while he furiously tried to finish with punches, he eventually settled on a rear-naked choke for the submission victory.

Who woulda thunk it? Thiago Alves with the submission win.