Strikeforce results and LIVE fight coverage for 'Melendez vs Masvidal' on Dec. 17 in San Diego

Share All sharing options for: Strikeforce results and LIVE fight coverage for 'Melendez vs Masvidal' on Dec. 17 in San Diego 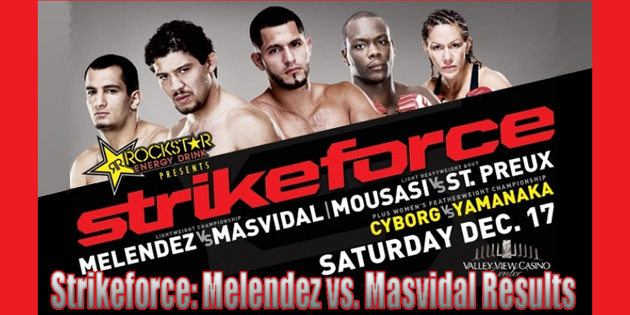 "Melendez vs. Masvidal" will feature lightweight champion Gilbert Melendez putting his 155-pound belt on the line against a very dangerous, and hungry, Jorge Masvidal in the main event of the evening.

In addition, former Strikeforce light heavyweight and 2008 DREAM middleweight grand prix champion, Gegard Mousasi, will look to get back in the promotion's win column in more than one year when he takes on former University of Tennessess defensive standout Ovince St. Preux.

Check out the current Strikeforce: "Melendez vs. Masvidal" fight card and line up:

Preliminary Card (May not be televised):

MMAmania.com will provide LIVE blow-by-blow, round-by-round coverage of Strikeforce: "Melendez vs. Masvidal," beginning with the Showtime telecast at 10 p.m. ET on Dec. 17. In addition, we will deliver up-to-the-minute quick results of all the under card action much earlier on fight night.Main Event:

Round one: Masvidal looks patient early, cautiously stepping forward and he finally whips a leg kick into Melendez's lead left leg. Melendez tries to establish his punches early but he's coming up a little short. He connects with a 1-2 combination and Masvidal taps his chin. Melendez lands a big right hand and Masvidal is showboating a bit. He's got to be careful or he's going to get smacked. Masvidal lands a nice uppercut to the body and both men open up, exchanges a series of strikes in the center of the cage. Melendez comes up short with a combination and Masvidal catches him with a leg kick which knocks him off balance temporarily. Melendez catches a kick and takes Masvidal down. Masvidal pops to his feet but gets stuck in a guillotine choke but he pops out of it. Melendez lands a nice right hand on the exit. Masvidal responds with a nice right leg kick before the horn. 10-9 Melendez

Round two: Masvidal comes out very upright again while Melendez bounces around on the balls of his feet. Melendez throws a nice counter right hand off of a low kick. Melendez turns up the offense, throwing a series of punches and kicks but Masvidal uses his footwork to keep himself from being trapped against the fence and circles to safety. Masvidal throws a combination and Melendez responds heavily. Melendez is warming up here, throwing a lead right uppercut to the body on multiple occasions. Melendez lands a nice left jab and follows it up with a right body kick. He throws the jab again and gets countered. Masvidal needs to be more active if he wants to win some rounds. 10-9 Melendez

Round three: Melendez shoots in and gets denied, eating a leg kick in the process. He continues to press forward, pressuring Masvidal with constant slight forward movement and consistent offense. Masvidal leaps forward with a jumping knee but Masvidal absorbs it and moves forwards again. Melendez connects with a 1-2 along the fence and Masvidal continues with his swagger, dropping his hands and dodging the follow-up strikes with his head movement. Masvidal throws a nice left hook to the body. Both men posture, sizing each other up for a bit but then Melendez explodes forward and catches Masvidal with a big right hand in a flurry. Masvidal whiffs with a spinning back kick at the end of the round. This was closer, but I'm still siding with "El Nino." 10-9 Melendez

Round four: More of the same. Masvidal is being way too patient and Melendez is keeping up the constant pressure. Melendez is simply being more aggressive here and showing more offense while Masvidal has his hands up and is not doing much. They briefly open up and Melendez just misses with a big hook, but finds a home for a straight right. Melendez opens up his offense even more, backing Masvidal into the fence. Masvidal has occasionally thrown out a jab and it appears to be swelling up Melendez's eye slightly. He throws a knee and both men trade blows until the horn. 10-9 Melendez

Round five: Both men exchange and Masvidal tries to throw a big knee, then follows it up with another knee but he can't find a home for it. He lands a nice chopping leg kick and Melendez responds with a nice combination of hooks which forces Masvidal to back off. Masvidal throws a push kick but eats a hard counter. Masvidal lands a nice left hand and Melendez throws a series of 1-2 combinations which tag Masvidal. Masvidal always taunts Melendez when he gets it, it's making it easy to tell if something gets through. Masvidal is showing no sense of urgency, just plodding forward and eating combinations. Masvidal again throws a big knee but eats a heavy counter. Melendez snaps Masvidal's head back with a jab and both men open up in the final minute. Melendez turns it on, throwing a huge flurry of strikes and Masvidal tries to counter with a takedown, temporarily putting Melendez on his back before finishing the fight in the clinch. 10-9 Melendez

Final Result: Cristiane Santos defeats Hiroko Yamanaka via knockout at 0:16 of round one

Round one: Mousasi stalks St. Preux early, patiently looking for a moment to strike. He backs OSP into the fence and throws a vicious head kick that just misses. St. Preux continues to throw kicks to the legs and body while backing up. Mousasi catches OSP with a nice right hand and St. Preux is telegraphing his strikes one at a time, giving the former champ plenty of time to get out of the way. Mousasi is clearly better technically in the stand-up and he catches a kick, taking St. Preux down into half guard. Mousasi postures up and rains down some big punches and St. Preux can't keep him off. Mousasi passes to side control. Mousasi gets a modified crucifix and tries to drop some punches but St. Preux reverses him temporarily to escape. Mousasi responds by sneakily retaining top position and he dives on a Kimura lock. He has it tight and St. Preux rolls to escape, then takes top position. Mousasi sweeps him beautifully, stacks St. Preux up and drops some punches, then finishes the round with a crucifix, dominating him at the horn. 10-9 Mousasi

Round two: St. Preux shoots in aggressively but he gets defended easily by Mousasi and then taken down. Mousasi postures up in St. Preux's full guard, then stacks him up along the fence looking to either pass or punch. Mousasi passes to half guard and drops some left punches. Mousasi looks to continue to pass but St. Preux has a lockdown on his leg. The ref stands them up for no reason and Mousasi lands a heavy leg kick. St. Preux explodes forward with a knee but Mousasi catches it and drives him into the fence. St. Preux grabs a leg and turns the corner, scoring a takedown and passing to side control. He needs to do something here but it looks like he can't throw anything significant. Mousasi pops back to his feet, and crushes OSP's opportunity there. St. Preux drops for a takedown and gets sprawled easily at the final horn. 10-9 Mousasi

Round three: Mousasi backs St. Preux into the fence and scores a brief takedown and tries to take his back on the way up. St. Preux turns into him and grabs onto a single leg, dragging Mousasi to the ground. St. Preux passes to side control and attempts to go to mount, eventually landing there after a scramble and he drops some punches. Mousasi rolls to safety and then drives St. Preux the whole way across the diameter of the cage and scores a takedown. St. Preux tries to burst back to his feet but Mousasi takes top position in the scramble. The ref says, "work to improve or I'll stand you up," for the 20th time at least and Mousasi blows his top position looking to either pass or submit St. Preux. This ref is an idiot. St. Preux is on top with 15 seconds left and he's looking for a choke but he can't tighten it as time expires. St. Preux's corner lifts him into the air but he clearly lost this fight. 10-9 Mousasi

Round one: Evangelista comes out with a huge right hook but Noons backs off and then surprises him by driving forward and scoring a takedown on the wrestler. Evangelista pops right back up and he takes control of the cetner of the cage. Evangelista pins Noons against the fence and takes him down but Noons pops right back up as well. Noons tries to sidestep away but Evangelista is hot in pursuit and lands a nice knee. Evangelista continues to control Noons from inside position and lands a nice knee followed by a solid left hook that connects cleanly. Noons seems a bit agitated and he starts going forward more aggressively, forcing Evangelista to back off and he throws a combination which results with a nice right hook to Evangelista's chin. They clinch for the rest of the round, trading heavy short strikes. 10-9 Evangelista

Round three: Noons gets backed into the fence and eats a big left hand but responds with a lead uppercut as both men tag each other. Noons throws a nice jab that snaps Evangelista's head back and he's playing around a bit with his hands and then throws a quick head kick which connects on Evangelista's face. Evangelista shoots for a takedown but gets denied and Noons responds with a huge uppercut. Noons is getting comfortable now, throwing a pair of jabs and Evangelista tries to close the gap with a clinch attempt. Evangelista continues to press forward trying to close the distance but Noons is moving laterally well and keeping him at bay. Noons drops down for a takedown but gets stuffed and Evangelista latches on a standing guillotine/D'arce choke. Noons gives up position to get out of it and pops to his feet when Evangelista tries to take his back. Noons pushes forward and throws a big left hook that lands heavily. Both men are very flat-footed and throwing slower. Noons catches Evangelista with a big left hook again and Evangelista balsts him with a right hand. Noons presses forward in the final 10 seconds and both men hug it out after the horn sounds. I've got it 10-9 Noons but we'll see.

To get up to speed on all the Strikeforce news and notes check out our extensive event archive right here.