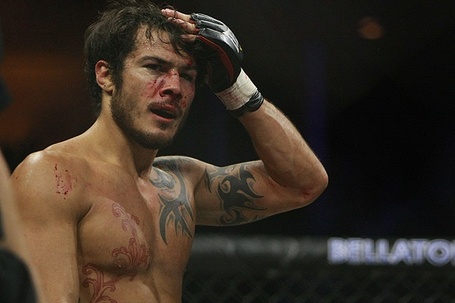 "El Matador" was finished via technical knockout (TKO) in the third round.

Huerta was 6-0 in his first six Ultimate Fighting Championship (UFC) bouts and had four stoppages including one over top contender Clay Guida in a barn burner.

As great a feeling he must have had on Dec. 8, 2007, he must have hit rock bottom on Nov. 26 2011. In four years we saw a possible UFC champion losing to a UFC castaway who was in his return bout from jail.

Roger Huerta was a promoter's dream; he was talented, young, exciting and a good-looking fellow. He was substance over style and clearly aiming for the top.

For the UFC, he was very marketable for his Mexican roots and with the UFC trying to obtain stars from all over the globe they found one of the best. Huerta even made the cover of Sports Illustrated magazine and did only wonders to boost himself up.

Leading up to his UFC debut at UFC 63, Huerta faced some of the best lightweights and did very well against them. His lone loss came in the finals of Superbrawl 36 when he broke his jaw in his third fight of the evening. He held wins over Matt Wiman and Brad Blackburn and a no contest with Melvin Guillard who was found greasing in between rounds.

Huerta would face Jason Dent on the preliminary card of UFC 63 which was headlined by a rematch between UFC welterweight champion Matt Hughes and BJ Penn. Dent cane in on short notice for Jason Reinhardt whose neck was a lingering injury. Huerta would easily win on all three judges score cards 30-27.

The bout would earn 'Fight of the Night' honors.

At UFC 67, Huerta would face John Halverson and would make short work of Halverson. At the just the19 second mark of round one a knee would spell the end. It was a controversial ending as many thought Huerta landed an illegal knee to the head of a grounded opponent but was cleared after replays showed it hit Halverson's shoulder.

Huerta rushed and landed fists for the TKO win.

At UFC 69 Huerta would take on the always-exciting Leonard Garcia to test his mettle. If you read MMAmaniac's Unambig's article on 'Winning isn't Everything' you will see Garcia fits here. For three rounds Huerta would survive the wild hands of Garcia and earn a decision victory.

In May of 2007, it would prove to be the month that propelled Huerta's new found fame. Huerta would go on to become the first fighter to be featured on the cover of Sports Illustrated.

Huerta would go through his next two opponents Doug Evans (TUF 5 Finale) and Alberto Crane (UFC 74) stopping both by TKO and now had made it to contender fights. Huerta was going to main event his first UFC show when he would fight Clay Guida at The Ultimate Fighter Finale: 'Team Hughes vs. Team Serra finale.'

The wrestling of Guida clearly stymied Huerta and frustrated him early on. As the fight progressed it was like a trout against the current as Huerta had to dig deep to get back in. Late in the second round, Guida nailed Huerta flushed and sent Huerta down again. The third round turned to be Huerta's as he kept the fight standing and nailed 'The Carpenter' with a knee and scrambled. Huerta would get his back and sink in a rear naked choke for the amazing comeback win.

Huerta came back just to fall.

At UFC 87 in what could have been Huerta's ticket to gaining a title shot turned to be a bitch-slap to his dreams. Championship fight hungry Kenny Florian would outpoint Huerta and earn a decision of 30-27 on all judges scorecards.

Huerta on his last fight of his current UFC contract was matched up with future lightweight contender Gray Maynard. The bigger and stronger Maynard couldn't 'bully' Huerta but did earn a close split decision. Huerta would never fight in the UFC to this date.

Huerta would bounce back from back-to-back loses when he fought and submitted Chad Hinton in his opening round fight. Huerta would then lose to Pat Curran at Bellator 17 in the lightweight tournament semifinals. His dreams of redemption and facing Bellator champion Eddie Alvarez.

Bellator being the de facto number three promotion and not having the same money as the UFC or Strikeforce didn't have money to spend on big fights. Bellator put together one of its most notable fights by booking Roger Huerta and champion Eddie Alvarez at Bellator 33 in a non-title affair.

The fight took place in Alvarez' hometown of Philadelphia, PA  and Alvarez gave his partisan crowd a show. For ten whole minutes Alvarez beat the crap out of Huerta unlike anyone had before him. It was the first time in Huerta's career that he had been stopped by way of TKO and Alvarez made sure it was over. Alvarez used his superior boxing and speed to smash Huerta and make no doubt why he was champion.

Huerta wouldn't fight for over a year.

He was hell-raising and spent a year in jail for his actions.

At UWF 1:'Huerta vs. War Machine' a tale of two very different stories clashed. One of career losses and one of personal poor choices. While each spent a year away from the fight game one appeared to come back with a purpose. 'War Machine' would stop Huerta by TKO (Rib Injury) and it seems Huerta has ran out of options and decisions to regain his form.

It is only poetic that 'War Machine' and Roger Huerta would try and use the other to rebound after each departing into two very different places. Both rid themselves of friends and family, one by personal choice and one who needed a 'time out.'

Where do they go now? Does 'War Machine' finally get himself together and what else can Huerta do to get his magic back? Or is just too late for both?