For those of you who may have missed it, here's a pic of Cung Le's nose after Wanderlei Silva sent his knee crushing into it last night (Sat., Nov. 19, 2011) in the co-main event of UFC 139: "Shogun vs. Henderson" at the HP Pavilion in San Jose, California.

Le was comfortable in the early going, utilizing the flashy kicks he's so well known for. And Silva was letting him dictate the range and find a good rhythm, much to his detriment.

But once the Brazilian turned it on, this was the result. And that, ladies and gentlemen, is why they call him "The Axe Murderer."

After the jump, check out a picture from the extremely talented Esther Lin of MMAFighting.com immediately after Silva landed the knee that destroyed Le's face. 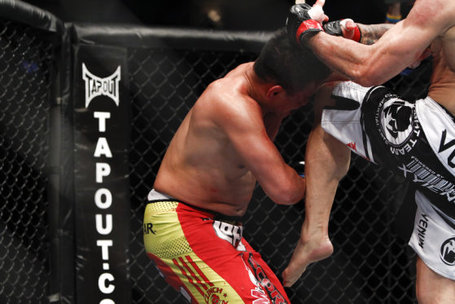 For complete UFC 139 results and blow-by-blow coverage of all the night's action click here.