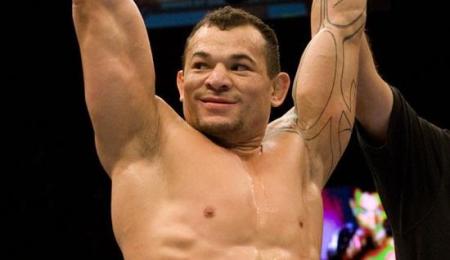 The Facebook portion of the UFC 139: "Shogun vs. Henderson" preliminary card went down earlier tonight (Sat., Nov. 19, 2011) from San Jose, California, and it was a doozy.

Once again defying all known medical science by fighting at 155-pounds, gargantuan grappler Gleison Tibau looked to win three in a row for the first time in his UFC career as he squared off with the red-hot Rafael dos Anjos.

Turns out it three really is the charm.

While dos Anjos put up a valiant effort and even won the fight on one of the judge’s scorecards, there’s only so much you can do when your opponent is roughly the size of a barge. Despite both men being Brazilian jiu-jitsu black belts, the fight took place almost entirely on the feet, where the sheer size and power of Tibau was too much for "RDA," who looked on the verge of unconsciousness after a series of vicious punches in the second round.

It was hairier than he would have liked, but Tibau walked away with the split decision and looked to have finally solved his cardio issues.

Just when you thought it was safe to fight at 155-pounds.

A recap of the rest of the Facebook "Prelims" action after the jump.

The final matchup of the Facebook prelims pitted fan favorite "Filthy" Tom Lawlor against unbeaten prospect Chris Weidman. Weidman came in riding a wave of momentum from two dominant UFC wins earlier this year, while Lawlor was fighting for the first time in nearly 13 months.

Unfortunately, kicking ass isn’t quite like riding a bike.

After a brief feeling-out period on the feet, Weidman took the fight to the ground, and after passing his way into side control, slapped on a vicious D’arce choke, putting Lawlor to sleep at 2:07 of the first round.

The sky really is the limit for Weidman, and I, for one, can’t wait to see how far he can go in the UFC middleweight division.

Representing the bantamweight division, former champion Miguel Torres and highly-touted prospect Nick Pace squared off in an attempt to erase the memory of their previous losses. Both fighters initially missed weight, Torres coming in at 137-pounds and Pace at 141-pounds. But while Torres managed to cut the remaining weight, Pace chose to sacrifice 20-percent of his purse, infuriating Torres.

He certainly managed to vent that anger effectively.

While both men were tentative in the early going, once Torres got to rolling, he refused to stop, peppering Pace relentlessly with long-distance blows. Even when Pace managed to put him on his back, he was met with a cavalcade of elbow strikes, and his attempted clinch game resulted in several different joints slamming into him relentlessly. After three rounds of handling Pace wherever the fight went, Torres walked away with a well-deserved unanimous decision win, scoring him his second UFC victory.

With both K-1 standout Tyrone Spong and Firas Zahabi in his corner, Torres looked fantastic tonight, and it will be interesting to see if he still has what it takes to hang with the elite of the division.

In the second battle of the night, eternal crowd-pleaser Matt Brown took on Ultimate Fighter (TUF) 11 veteran Seth Baczynski in a bout that seemed guaranteed to produce fireworks.

After a wild first round that saw Baczynski score a powerful takedown but wind up on the wrong end of a slick sweep, Brown, a striker by trade, opened up the second round with a takedown of his own. Unfortunately, Seth’s grappling superiority immediately asserted itself, as he slapped on a vicious guillotine that, after a brief struggle, elicited a tap just 42 seconds in for Baczynski’s fourth consecutive win.

Not a bad night of work.

The evening kicked off with a match-up between Team Alpha Male standout Danny Castillo and TUF 13 competitor Shamar Bailey. Both men were coming off losses to division standouts Jacob Volkmann and Evan Dunham, respectively, and with the bar set so high in the UFC lightweight division, both desperately needed a win.

Something had to give.

While Bailey had ridden his wrestling to victory both on the show and against fellow competitor Ryan McGillivray on said show’s finale, it was Castillo who asserted his dominance in that area, scoring multiple takedowns before passing his way to mount. Strong as he is, Bailey found himself unable to dislodge "Last Call" and, after a protracted bludgeoning, the ref stepped in to save him with less than 10 seconds left in the round.

Bailey is now 1-2 in the UFC and came in heavy for this bout. His future in the organization is definitely uncertain.

As we head into the Spike TV portion of the prelims, remember to check MMAMania for up-to-the-minute results and live play-by-play.