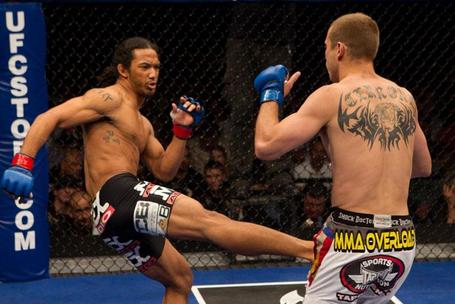 In just two days, Ultimate Fighting Championship (UFC) will introduce its product to a considerably larger audience than usual, as UFC on Fox 1 will be the inaugural event held on the network television station.

The promotion and the FOX network recently announced their collaboration to give sports fans a dose of mixed martial arts (MMA) on one of the premier sports channels. UFC on FOX 1 will be headlined by a heavyweight title fight between the top two heavyweights in the world today, as champion Cain Velasquez puts his strap on the line against number one contender Junior dos Santos.

As most fight fans already know, the sport is made of thousands of fighters with different combinations of martial art backgrounds. A lot has changed from the early days of the sport, as it now appears each fighter is a hybrid of sorts, mixing several different disciplines to make a complete package.

We've also seen a certain evolution. There used to be a day when jiu-jitsu, wrestling and boxing were the predominant disciplines. Now, though, we see arts like sambo, karate and even capoeira being used as often and effectively as any other.

Each art is unique and can be used to produce the desired result under the care of a skilled practitioner.

I have gone into more detail with each discipline, including jiu-jitsu (here), wrestling (here), Muay Thai (here) and boxing (here). These are the most commonly seen martial arts, or the four that are most often put into practice in high profile match-ups.

But other then the hardcore fans who watch with extreme passion and understanding, does everyone see the differences or subtle nuances in techniques that showcase each individual art?

In case you don't, follow me after the jump and I'll explain.

While we've already covered the boxing, grappling and wrestling skills of a few competitors from this upcoming fight card, it is important not to forget about the fourth discipline, which is really a mixture of two separate arts.

That would be a blend of kickboxing and Muay Thai.

The two have very close ties to one another and while they can be vastly different, they are often effective in the very same way. Further distancing itself from boxing, the disciplines of kickboxing and Muay Thai allow fighters to showcase their striking with more weapons at their disposal.

If you think of boxing as two sticks of dynamite, than Muay Thai is a whole box full.

Muay Thai focuses on utilizing all limbs of the body. Throwing punches is still a common trait with other striking disciplines and the difference is the encouragement of elbow, knee and foot strikes. Fighting in close quarters, speed and clinching are more attributes that Muay Thai enhances.

While no fighter on the UFC on FOX card is considered much of a Muay Thai expert, there are a couple of fighters who have mixed in the fundamentals of the discipline into their striking arsenal.

While Ben Henderson will look to counter the grinding wrestling and improved boxing of Clay Guida on Saturday night, we may be treated to watching Henderson showcase his versatility and well rounded skill set. A skill set that includes ideology from the Muay Thai discipline.

When "Bendo" matched up against the tough, gritty Mark Bocek, the crafty Henderson was able to stifle any and all offense mustered up by his opponent en route to a unanimous decision victory. In one of those instances, he did so by using a Muay Thai influenced attack.

While getting to his feet, Henderson delivered a knee to the body on a slow to defend Bocek. The knee lands and while doing so, he grabs the back of the neck to gain control of Bocek’s body and posture. He accomplished that by reaching behind the neck and gaining a "plum" or a "collar tie" and pinching down, disallowing escape and maximizing control.

From there, he lands additional knees to the body and attempts to throw them higher to land on the chin. Even though they are blocked, the strikes are still strong enough to do damage. Henderson also forces the head down, which disorients Bocek so when Ben releases, he's able to land a few solid strikes inside and along the fence.

Another competitor who really utilizes some technique from Muay Thai is Cub Swanson. However, he is always recognized as more of a kickboxer, even though his roots are strong in Thai boxing. While many may not recognize him, since he has been fighting the injury bug since the folding of the WEC, the ones that do remember Cub for his always exciting bouts and willingness to stand and trade with anyone.

This is where it can become extremely difficult to see the line between an art like Muay Thai and kickboxing. But why does it even matter when they are so closely related in their functional usage in mixed martial arts?

Here, Swanson resets after a wild exchange with his opponent and launches a head kick from his lead leg. This kick is used the same way you would throw a lead hook with your hands. It won’t have the same power as it would using the rear leg but it hits quicker, taking away precious milliseconds to block the strike.

The strike also takes away balance and forces an opponent to reset his base in order to get into his own rhythm. As you can see, before Mackens Semerzier can reset, Cub throws a front push kick just above the knee, forcing Semerzier to once reset.

When you are striking it is important to really have a solid base and to get into a comfortable rhythm. One of the main strengths that Anderson Silva and Jon Jones possess is that they are not only always comfortable on their feet but they throw strikes continuously that throw opponents off balance and out of rhythm.

After evading a head kick, Swanson chases his opponent down, landing a very solid leg kick. He lands on the lead leg of the fleeing Semerzier as he circles away towards the side of his lead leg. The kick lands on a planted leg that is incapable of "checking" the kick to help absorb the impact.

Landing a kick in this manner does two additional things in comparison to a regular leg kick. (For more on leg kicks click here) The biggest being that the kick puts a lot more power inflicting damage onto the leg. Not only is their momentum added by the stalking Swanson, the kick is landing into the leg as the leg moves into the kick. That additional power can really hamper the mobility and injure the knee.

It also opens up for other strikes. Leg kicks tend to force your body to crunch up and your legs to lift in anticipation. Creating an uncomfortable environment in the striking zone opens up a world of opportunities. Look for Swanson to try and emulate this against his opponent on Saturday night.

Muay Thai and kickboxing are two of the most important facets of the striking aspect in mixed martial arts. Using kicks and knees open up opportunities for the hands can act as both a great offensive threat and a solid defensive base.

That is all for today, Maniacs.