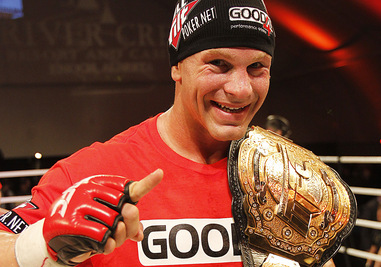 In the main event, MFC 31 Light Heavyweight Champion Ryan Jimmo sought to do "the robot" all over promotion newcomer Rameau Thierry Sokoudjou's face.

Prior to tonight, Jimmo had won an astonishing 15 consecutive mixed martial arts (MMA) fights. Sokoudjou, meanwhile, was riding a three-fight win streak of his own and looking to make a big splash in his MFC debut.

Something had to give.

Sokoudjou entered the ring with what appeared to be an entire roll of medical tape around his left leg. It didn't take long for Jimmo to plant a few inside legkicks on what may as well have been a bull's eye. If you've seen Jimmo fight before, you know that he starts slow and methodical. Tonight was no different as the first round saw both fighters cautiously feel each other out.

Early in the second round, Sokoudjou opened up a nasty cut with a knee to the middle of Jimmo's forehead. Sokoudjou could smell blood, which wasn't hard to do because it was everywhere. The champion was able to recover, but clearly lost the round.

Heading into the final two rounds, Jimmo appeared to be down, two rounds to one. In the fourth round, he began to fight like he knew he was behind, coming forward and getting more aggressive with his striking.

In a final round marred by multiple stoppages to wipe up sweat off the vinyl floor covering, Jimmo poured it on (pun intended), testing Sokoudjou's often criticized endurance as well as his resolve.

Here's what the rest of the MFC 31 card looked like:

After a close split decision win over Curtis Demarce at MFC 28 on Feb. 25, Richie Whitson looked to extend his win streak to six as he squared off against Canadian-born Kajan Johnson.

In the pre-fight interviews, Whitson admitted that he still has a lot to learn in the MMA game.

Johnson looked early on to impose his will and implement his incredible ground game. Whitson had no defense and was quickly overcome. "Ragin'" was able to sink in a deep rear-naked choke at 3:52 of round one and take home what looked to be the submission of the night.

Curtis DeMarce entered the cage for his fourth time this year when he took on the always tough Laguna Hills, Calif., native, Adam Lynn.

DeMarce came into the fight as the favorite, but Lynn proved that you can never underestimate the heart of a U.S. Marine. In one of the first exchanges, Lynn nailed DeMarce with a standing right elbow to the forehead that left him seeing stars. It was "Goodnight Irene!"

Lynn secured the knockout victory at 1:38 of the first round.

In a fast-paced lightweight throwdown, the 6-1 Sabah Fadai faced off against Mukai Maromo.

"The African Assassin" was coming off a violent first round technical knockout win over Scott Cleve at MFC 30 on June 10. Tonight, Maromo looked to do more of the same.

This was a very exciting match-up between two fighters with Muay Thai pedigrees.

The first round was marked by the presence of some very vicious leg kicks by Maromo. After the round, Fadai's lead leg was severely swollen and his confidence looked equally bruised. By the end of the second round, Fadai could barely stand on a front left leg that would be difficult for squeamish viewers to look at.

Fadai is going to want to invest in some ice and cancel any plans he may have had to walk anywhere for the next week or so.

Veteran Terry Martin was seeking redemption after a brutal first round technical knockout loss to Douglas Lima at MFC 29 on April 8. Allen Hope suffered a similar fate in his prior contest.

Hope took the fight on only two weeks notice, after Dhiego Lima was forced to withdraw because of an injury.

Martin opted to take the fight to the canvas after looking uncomfortable in the initial stand-up exchange. He was able to work his ground-and-pound and Hope never really found any kind of answer. Finally, the official on hand called a stop to the action at 2:13 of round one, after Hope appeared to stop intelligently defending himself.

After both fighters failed to make weight, tonights contest between Cody Krahn and Ryan Chiappe was changed to a catchweight bout.

Krahn pushed the pace right from the opening bell, rushing in and looking for a takedown. After missing with his attempt, he ended up on the wrong side of Chiappe's ground-and-pound for a good minute or so.

"Genghis" was able to weather the storm and slip out the back door after a failed armbar attempt by Chiappe.  After several minutes of non-stop action, Krahn was able to score a takedown and lock in a very tight guillotine, causing his opponent to tap at 3:45 of the very first round.

This was a fantastic opening fight!

Here are the full results from the MFC 31: "Rundown" Main Card: