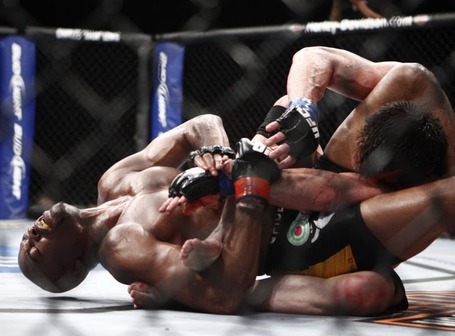 Does a good defense really make for a good offense?

In mixed martial arts (MMA) it is as important to defend as it is to attack. There are fighters who like to utilize a shootout style hoping to be the one left standing after the onslaught but there aren't many of these men that sit atop their respective weight classes.

The ones who do defend well are, often times, the most successful. A fighter like Anderson Silva has made a legendary career out of knocking opponents out while taking little to no damage in the process. He takes little punishment while handing out massive beatdowns. Ben Henderson and Jon Fitch have become known as being impossible to submit in their MMA careers, fending off submissions as though they're totally immune.

Those who have kinks in their defensive armor suffer heavily from not being able to match their offense with any sort of reliable defense. And that can be very costly with the elite fighters in the sport today who can capitalize on just about any mistake you make, even if it's just a small one.

One of these fighters is Chael Sonnen, a veteran in the sport with 37 career fights spanning several promotions dating all the way back to 1997. Of those 37 fights, Chael has lost 11 times, with eight of those coming by way of submission. And, not surprisingly to most that follow Sonnen, all but one of those submissions are chokes.

How could a wrestler who has been part of this sport for over 14 years have such a debilitating weakness? Knowing his own strengths, such as ground and pound and control from top position, shouldn’t he have trained chokes since that would be the best defense against his style of fighting?

To get more in detail on the errors Chael makes follow me after the jump.

At UFC 117, Chael Sonnen would hit the pinnacle of his career when he would meet up with Middleweight Champion Anderson Silva. Sonnen would earn that contender opportunity after ruthless beatdown victories over Nate Marquadt and Yushin Okami, two perennial contenders.  After a decade plus of grinding through the MMA lifestyle that saw him fight the likes of Paulo Filho, Forrest Griffin and Jeremy Horn, he had finally cemented himself atop his respective division and was in line for his first shot at UFC glory.

Sonnen would deliver, too, and back up his bold prediction prior to the fight. The MMA world watched as Anderson Silva was beat up and battered with near-300 punches coming from the unrelenting and vicious challenger.

However, with the title at his fingertips and mere moments away, Sonnen would allow his Achilles heel to once again overshadow his talents.

Even though Silva just blasted Sonnen with a shot to the jaw that lands flush, you can see that Sonnen has top position inside the long legged guard of the champion. He has kept his posture upright which gives him space to land strikes while also keeping him in distance to anticipate submission attacks.

This position is one that was very familiar in this fight for Sonnen as he pounded his way through the defense of Anderson several times throughout this fight. He always kept his posture where it should be. A lot of instructors teach that you should always be able to see the sky or the roof from your posture while in the guard to keep from being vulnerable to submissions. That teaches you to keep yourself erect and away from any chance to be snatched down and your posture broken.

But while posture is hugely important, that's not all there is to it. One of the most important facets of jiu-jitsu is wrist control. In mixed martial arts this does a few things, one of them being a way to prevent getting hit with strikes. When Anderson clutches on to Sonnen's right writst, he limits Chael from landing strikes with that arm. But it also isolates it in anticipation of a possible submission attempt. Isolation of an arm can do a number of things ranging from arm bars, kimuras, triangles and even omoplatas.

Keep an eye out for isolation of the arms.

Now, Anderson has broken down Sonnen's posture. Sonnen is now within reach of both Silva's arms and legs. Even though he has a hand pressed onto Silva's face in hopes of blocking his breathing and causing discomfort, he now has his hands in an area where a mere second of lapsed judgment could lead to an isolation and submission attempt.

Anderson has the right arm still slightly trapped with his arm overlapping and he also has the left arm trapped as he squeezes it between his arm pit. Nothing at this point is fully committed to but he is attacking and seeking openings.

His elbow strike causes Sonnen to slump even more within his guard, which allows Anderson to rest from the strikes being thrown and also allows him to set up his next course of action.

After absorbing hundreds of shots thrown by Sonnen, Silva finally sneaks his triangle into the mix. With both arms trapped by overlapping his hands over them to control, Anderson creates enough space pushing the right arm back and throwing his own left leg over Sonnen's shoulder. With a lengthy fighter like Anderson it is always dangerous to allow their legs to be on top of you. Why? Because he can lock in a triangle a lot quicker then someone with shorter legs.

Anderson throws the leg up and over and when Chael attempts to pull out of the hold, the other trapped arm is being tugged on to prevent that. Chael sits in the choke too long as Anderson pulls down on his head and pushes up with his hips to tighten the choke even further.

By the time Chael even begins defending, he is already in a deep hole.

Sonnen does do the right thing by stacking Anderson up; however, it is too little to late, as his efforts are thwarted by the choke itself which has sapped a lot of his energy. Anderson at this point should have cut the angle and rolled Chael over. By not doing this, he allows Chael one last desperation gasp of defense.

Sonnen tries to put his leg over Silva's body to wrap around and slip out of the choke. At this point, Anderson starts attacking with the armbar/triangle combination and he beats Chael to the punch, securing the tap out, the victory and notching another title defense in one of the most amazing come from behind victories in MMA history.

Chael loses for numerous reasons, starting at wrist control. He allows Anderson to trap his arms long enough to attack. Most of the basic jiu-jitsu techniques teach wrist control heavily and for Sonnen to succumb to that shows his lack of respect for Anderson’s jiu-jitsu while exposing his over confidence in his ground and pound and posture. (For breakdowns on the chokes and defenses, click here, here and here.)

He also gives up posture. He starts the round the way he had the four previous rounds and that is with great posture delivering brutal strikes to a grounded foe. Posture is another basic technique that is taught when attacking from inside the guard of an opponent.

But this isn’t the first time Chael has made these mistakes.

Yes, Maniacs, that is Forrest Griffin utilizing the underrated ground game Joe Rogan is always talking about. In 2003, Sonnen would face off against the future champion under the IFC banner. And the result is eerily similar to what we just discussed with Silva.

As you can see, Forrest has double arm control the exact same way Silva did. Forrest has isolated the left arm behind Sonnen and has also trapped the right arm in preparation for a possible armbar/triangle combination. The triangle comes up and over the neck and Forrest pulls down on the head until the tap out comes.

This is a wrestler’s mentality, though. A lot of fighters with that base will establish themselves heavy on your body and deliver strikes from that position. Grapplers have been working to counter just that for years and in these two clips, it shows.

Chael Sonnen’s Achilles heel isn’t his lack of defense of chokes. His biggest weakness is that he is fails to follow the most rudimentary rules of grappling. It shows in his eight losses to men with a deep understanding of Brazilian jiu-jitsu.

Luckily for Sonnen, Brian Stann doesn’t possess the high level jiu-jitsu off his back that Anderson Silva, Demian Maia, Renato Sobral and Jeremy Horn do. Will Chael brutalize Stann this weekend with his smothering ground and pound or do you Maniac’s feel this weakness will be exploited ... again?