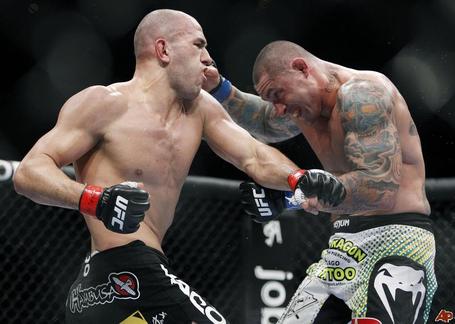 Tell us how you really feel!

After the "Resolution" drug tests came back, it was discovered that Silva used a urine adulterant to alter the results of his drug test with the intent to cover up a banned substance he injected into his spine for pain.  The result was then overturned to a "no contest" and Vera was quickly invited back to the UFC.

Speaking on the MMA Hour with Ariel Helwani in his most recent interview, “The Truth” talks about his comeback trail, Jon Jones and also let fans know what he thinks of Silva.

When asked about how he felt about his release from the UFC:

“Like somebody close to you just died, that’s exactly what it felt like. It doesn’t feel real, it doesn’t set in, and you’re hoping that you are just dreaming.”

About his second chance with the UFC:

“It’s like when you broke or when you cheated on up your girlfriend in middle school and she broke up with you but you know she was the perfect one but you’ll never get her back. It was exactly like that.”

On his performance in the Thiago Silva fight:

“The whole fight I just kept asking myself, what the hell is going on? Why is this?  I train with Phil Davis, Travis Browne, the Noguiera brothers, Junior Dos Santos…I train with some big dudes man and nobody has ever just been able to hold me down you know?”

On Silva’s antics inside the cage:

On whom he feels can dethrone Jon Jones:

“You need to respect him now, not when he beats you up. I had to learn that the hard way. He is that good. There are at least three or four that can beat him, Rashad, Phil Davis, myself and Machida…and Shogun. I’ve never seen Shogun lose to the same person twice…ever. He lost to Jones once, I don’t think he will lose like that again”

Brandon Vera was one of the hottest prospects in 2006. At one point, “The Truth” predicted he would be the first fighter to hold the UFC light heavyweight and heavyweight title at the same time. However, back to back losses to Tim Sylvia and Fabricio Werdum quickly slowed down his momentum.

Vera then went a subpar 3-3 since those losses leading into his fight with Silva.

Now that “The Truth” has a second shot with the UFC beginning at UFC 137 against Elliot Marshal on October 29, will he be able to make some noise in the crowded light heavyweight division, or will it be much of the same?