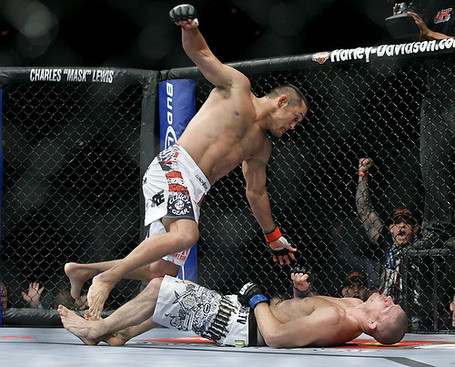 Dan Henderson's striking coach, Gustavo Pugliese, has given his thoughts on his pupil’s upcoming bout against Mauricio Rua at UFC 139 on Nov. 19, 2011, in San Jose, California. This is a bout that could give us the next challenger for the light heavyweight title against either Jon Jones or Lyoto Machida, who are scheduled to clash at UFC 140 on Dec. 10 in Toronto.

Henderson is coming off three straight knockout victories against the likes of Renato Sobral, Rafael Cavalcante and Fedor Emelianenko. His last four wins have come via violent stoppage, which incldues a vicious KO of Michael Bisping at UFC 100 before leaving the UFC.

One would be surprised that such an accomplished wrester (1992 and 1996 USA representative in Greco-Roman wrestling) prefers to keep that fight on the feet, but that has been "Hendo’s" preference throughout his career, as he has given MMA fans around the world highlight-reel knockouts throughout his almost 15-year mixed martial arts career.

Don’t expect his plan to change for an equally impressive striker in "Shogun."

Speaking to Tatame.com, Pugliese stated his student’s goals for the upcoming fight:

"I’m hoping it’s an explosive fight. Both have the ability to finish it via knockout, but it’s a five rounds bout, so we don’t have to rush into it. We don’t wanna get into a situation where Dan is tired for not having got his coups right. So, we’ll take our time during this fight. Of course the goal is always the knockout. It’s what Dan is up to, he’s always going for the knockout, but we need to know when to attack and when to counterattack. We won’t change Hendo’s style, but we’re working in some details that might surprise Shogun."

Gustavo then turned his attention to "Shogun:"

"On the tapes of Shogun’s last fights I noticed some flaws on his Boxing game. Shogun’s Boxing actually is not that developed. He only moves forward and tries to find the right angle to punch his opponents. Since he’s not much technical, he walks a lot. This bout against Shogun might be more dangerous than the one against Fedor, event because Shogun has an efficient Muay Thai for MMA. Against Fedor we’re just waiting for him to come and punch him. Shogun brings a great variety of coups on the stand-up game."

Indeed styles do make fights, and Shogun and Hendo's styles should make for an entertaining bout.

With Rua's expertise in the Muay Thai clinch and Henderson’s pedigree in wrestling, we can be assured that something’s got to give and we should be treated to a striking war.

How do you see this fight playing out?

Will Henderson be able to connect with his infamous "H-Bomb," or will a rejuvenated Shogun end Henderson’s winning streak and spoil his UFC re-debut on his road to claim the 205-pound title once again?