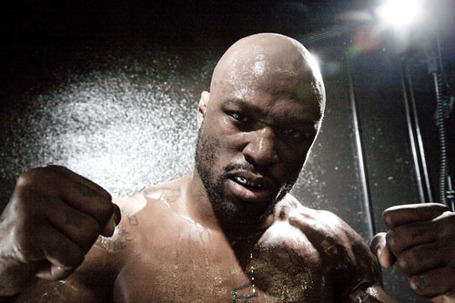 The always vocal and entertaining Muhammed Lawal has once again expressed his desire to settle his beef with the equally entertaining and maybe even more vocal UFC light heavyweight, Quinton Jackson.

"King Mo" and "Rampage" have had beef dating back to 2009, when an infamous video was leaked in which the two were involved in a verbal confrontation in a van. It's been a hate-hate relationship ever since.

And with the apparent end of Strikeforce just around the corner, Lawal may as well set up for a big money match-up inside the Octagon, right?

"This fool Rampage calls me out, and then people get mad when I respond? He’s a b—h in my eyes, because he didn’t respond. Maybe he’ll respond later, but the word is he wants to fight Mauricio ‘Shogun’ Rua. That’s whatever. But he called me out, so I’m going to respond. When’s the last time you heard me mention Rampage’s name before he mentioned mine? I don’t care about him. He wasn’t even on my radar. But now, he wants to say something about me, he’s on my radar now. We’re going to bang eventually. Who knows? We’ll see. My contract is up in February. … I’d like to fight, but I have no idea."

Lawal, the former Strikeforce light heavyweight champion, is coming off an impressive knockout victory over the previously undefeated Roger Gracie at the Strikeforce: "Barnett vs. Kharitonov" event just this past Sept. 10.

Coincidentally enough, Lawal's Strikeforce contract is up in February and "Rampage" has expressed his desire to compete on the Japan card scheduled for the same month, though his sites are set on avenging a loss to Mauricio Rua.

Both Jackson and Lawal have a strong fan base in "The Land of the Rising Sun" due to their time spent competing in PRIDE and Sengoku, respectively. A matchup in Japan at the highly anticipated UFC card scheduled for February 26, 2012, would make perfect sense.

What do you say, Maniacs, does "King Mo" deserve to be drafted to the UFC and finally settle his score? Or does he still have work to do in the Strikeforce ranks to prove he deserves to bang with the big boys?