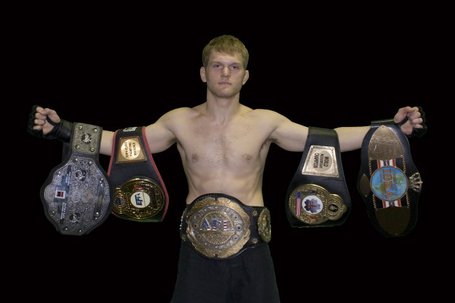 CHICAGO, Ill. (January 7, 2011) — Brent Weedman’s last three fights, all wins and finishes, have been under the Bellator banner.  Weedman now has the chance to secure his next three fights and ultimately a shot at current Bellator Welterweight Champion Ben Askren in the Season 4 Welterweight Tournament airing on MTV2 in March. Currently riding a string of ten consecutive victories, the electrifying welterweight brings an impressive 18-5-1 professional record to the tournament.

"Brent has put on some incredible performances for us over the last two seasons, he’s earned the right to be added to the Season 4 Welterweight Tournament," said Bellator Chairman and CEO Bjorn Rebney. "Brent has the raw talent and potential to do big things in the tournament, which will be one of our most competitive to-date."

A firm believer in finishing his fights decisively, all 18 of Weedman’s wins have come via TKO, KO, or submission, including three first-round finishes in Bellator with a notable KO of Rudy Bears at Bellator 16. Click here to watch: http://bit.ly/fwrjxO

"I'm always looking to finish the fight," said Weedman.  "That's something I feel very strongly about. I'm a finisher. I've always had that mentality in any sport I've ever played. I play to win decisively."

Residing and fighting out of Louisville, Kentucky, Weedman began shaping his future as a mixed martial artist at the young age of eight when he started training in Judo.  As a teenager Weedman traveled to Japan and Europe competing in Full Contact Bare Knuckle Karate.  In 2004 he became the youngest and first non-Japanese fighter to win the Japan Open Bare Knuckle Karate Tournament, along with also capturing the Kentucky State Championship in Judo.

However, it’s his lack of recognition as a fighter that Weedman believes will be to his advantage coming into the tournament.

"It's an absolute fact that people are sleeping on me going into this tournament," said Weedman. "This tournament is filled with big names in the welterweight division, and a couple other guys. I happen to be one of those other guys. But that doesn't affect my end of the deal. I'm still bringing it. Whether or not they know it’s coming or not is up to them."

MTV2 is a man's best friend, available in nearly 80 million homes and with the highest concentration of males 12-24 and 12-34 on TV today. A vibrant mix of music, lifestyle and action sports programming, MTV2 has reflected the habits and behavior of young people since its launch in 1996. MTV2 is part of MTV Networks, a unit of Viacom, one of the world’s leading creators of programming and content across all media platforms.