All physical aspects of the mixed martial arts (MMA) game (and combat sports overall) are essential to lead you to victory inside the cage or ring. But just like any other sport, there is so much more to a successful outcome. In all sports an effective game plan is a key to success as is proper training and discipline.

MMAmania's own Andrew Keller did a piece where he described another non-physical aspect of MMA. But there is one skill that can affect a fight more so than any strike or strategy. One in particular can change the course of the fight before it even starts.

MMA has seen plenty of intimidating figures from Igor Vovchanchyn and Wanderlei Silva to Mirko Cro Cop and Gilbert Yvel.

But just how much does this play into the fight itself?

Intimidation: "To fill with fear, to overawe or cow, as through the force of personality or by superior display of wealth, talent, etc." In MMA and all combat sports it means being inside your opponent's head, messing with their focus while you imply your strengths and their weaknesses.

Many fighters have it and many just don’t. Some can intimidate with their words, some with their faces and some with their actions. It plays a huge roll in the fight game. To be mentally unfocused may cause you to fail before you even step into the cage/ring. 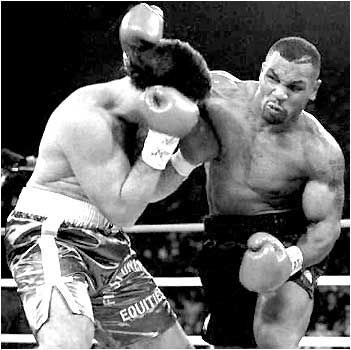 Mike Tyson was one of the most feared athletes ever to compete in combat sports.

Tyson had intimidation down to a science. He had it all: He could talk fear into his opponents, he stared them down mercilessly and his fights left current and future opponents trembling. Tyson was one of the best trash talkers to ever grace combat sports. He wouldn’t just say things for shock value or to hype the fight, he would say things that would make you question his sanity and be fearful for his opponent.

Quotes like "My power is discombobulating, devastating, I could feel his muscle tissues collapse under my force. It's ludicrous these mortals even attempt to enter my realm," had the fans, the media and fighters with their chins dropped.

Tyson also had the look.

He just looked like someone who wanted to knock your head off. When he would look into cameras or look at his opponent you knew this was the right sport for him. That intimidating look can get into the heads of a lot of people. Sit in an arena and listen to people talk about the fighters, I have heard countless people choose their favorite based on their look.

Tyson was an easy pick for anyone who saw him entering the ring. He looked vicious.

And finally, Tyson had the skills to back it all up. With devastating power in his punches, he would knock out his opponents early and often. He had even called what round he would knock out a few of his challengers. The man was scary and for many years was the real deal.

Without those skills he would just have the look of just another tough guy. How many times have we seen guys that don't look imtimidating win fights? Without the devastating power and finishing ability Tyson would not have been the force he was in his prime.

Fedor Emelianenko is an intimidating figure to say the least.

He didn’t have the verbal skills Tyson had and he wasn’t animated either. Fedor was plain and simply too calm, too focused and everyone knows it's the calm before the storm. And that’s exactly how Fedor was; he was seemingly at peace with himself and wasn’t concerned with anything other than the task at hand. The fight would begin and he was absolutely ferocious and menacing.

Some of Fedor's best highlights from his days in PRIDE showed him jumping into his opponent's guard no matter how acclaimed their jiu-jitsu skills were.

Fedor had real ill intent when he fought. When he was wading through Nogueira’s guard with flying overhand passes and when he would throw the lunging hook that would seemingly break his hand every time he threw it, everyone was fearful of "The Last Emperor."

Between his willingness to play in jiu-jitsu fighters guard, he also spent a lot of time striking with the better strikers PRIDE could offer. Fedor liked to throw a lunging hook, a move that he still uses frequently. The punch not only had brutal force because of the momentum but because of his combat background he throws it very effectively with all of his weight and torque.

Basically, it was a "pick your poison" between very active and brutal ground-and-pound or take your chances on the feet where Fedor would still rock you with his deceptively quick and powerful hands.

But regardless on how menacing his actual fighting skills were, it was always his demeanor that was intimidating. In Fighter’s Only Magazine, a sports psychologist had been quoted saying,

"The best when it comes to the stare down is Fedor Emelianenko. Watch him: he does not make eye contact and his entire expression is extremely relaxed - you would think he is about to perform a ballet or something. But here is the crucial thing. When the referee tells them to head back to their corners, Fedor suddenly darts a short look directly at his opponent - or through his opponent, I should say. This kind of look is associated with antisocial behavioral disorders and psychopaths. They don't look at you, they look through you. It's emotionless; it goes deeper than skin level. You will get a lot of fighters who will catch that look and suddenly realize they don't want to be there. Wanderlei Silva has a stare-down that makes you think 'this is gonna hurt', but Fedor's makes you think, I might die'." 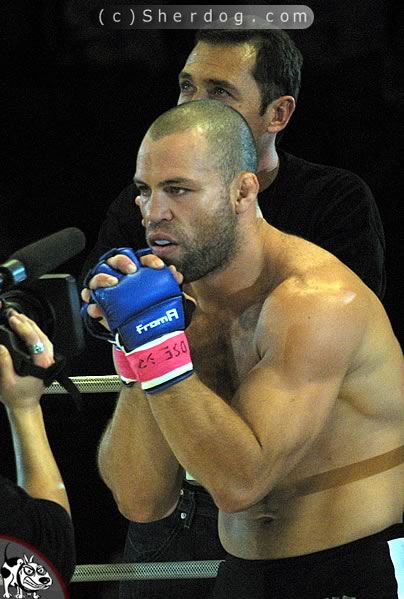 And speaking of stare downs, what is a list about intimidation without Wanderlei Silva?

During his PRIDE years, Silva may have been the most feared man in all of MMA. In an organization that had little rules, Wanderlei saw fit to hone in on the most devastating ways to finish fights. He would soccer kick, face stomp and use whatever limb he had ready to try and tear your head off.

He forever made a name for his gym Chute Box, which is still known to this day to produce some of the most aggressive and violent fighters in the MMA world. Silva would utilize whatever offense he had whether it be wild hooks, overhands, the Thai clinch and what he was famous for: The foot stomps and soccer kicks.

What was scary was the pleasure he seemed to get out of it. When he was pummeling "Rampage" Jackson with knees from the Thai Plum or blitzing an over-matched Japanese fighter to the ground and soccer kicked them into unconsciousness, Wanderlei Silva always brought the violence.

And not only did he bring the violence during the fight but his next opponent knew that no matter how devastating the last fight was, Wanderlei wanted more.

They nicknamed him the "Axe Murderer" and quite frankly the name was fitting. Wanderlei has been a participant in some of the most intense stare downs (in my opinion) in the history of combat sports.

But how does that affect the fight and the opponent mentally?

If anyone wants a good book to read I would suggest Sun Tzu's The Art of War. In it, Sun Tzu says "To fight and conquer in all your battles is not supreme excellence; supreme excellence consists in breaking the enemy's resistance without fighting."

Putting nerves and anxious feelings aside, if you are mentally weak and easily broken by an opponent in any way there is a very high percentage chance you will lose. The fighters mentioned above made careers out of winning fights before they started.

They struck fear into their opponents, they overwhelmed them mentally and they broke them down.

It is not an easy thing to detect but many opponents who were often already overmatched would crumble to the stare of Wanderlei Silva. They would be fearful which would then prompt them to lose sight of any gameplan, lose composure which then would prevent them from being able to escape bad spots.

They would be mentally defeated and once the first rush of adversity hit them they would easily crumble. Watch many of Wandy's opponents wither and turtle from the outset. People who fought well against him were strong minded veterans in the game like Dan Henderson and Mirko Filipovic.

Aside from the death stare that Wanderlei gave, many opponents have lost composure going into the fight with heavyweight G.O.A.T Fedor Emelianenko. The overwhelming feelings of fighting such an iconic figure presses into a fighter's mind.

Some fighters have often respected him too much thus conceding victory beforehand when they already felt inferior. Others haven't respected him enough and just wanted to be the first to beat him or the guy that makes his mark on the sport.

From Strikeforce heavyweight Brett "The Grim" Rogers, who was knocked out by Emelianenko in Nov. 2009 after entering the bout with a perfect 10-0 record and having finished all ten of his opponents (including former champion Andrei Arlovski) with his fists:

"I've never been intimidated by anyone in my life. But when we got to the staredown, I looked into his eyes to let him know he was done -- and there was nothing there. It was like I was staring into a void. It kinda psyched me out."

Emelianenko's lone legit loss was to a fighter who remained calm and composed. Fabricio Werdum gave Fedor the respect he deserved but never lost faith in his skills. Werdum's ground game is one of elite accolades and he showed his confidence in it.

Intimidation is quickly countered with mental toughness. If a fighter is too confident in himself he will be humbled. Mike Tyson was a huge favorite when he fought Buster Douglas and his over confidence met a match when Douglas did not wilt under Tyson's immense stature.

Intimidation is also a real and beneficial skill to possess. You don't have to be a great trash talker, you do not have to look really mean or aggressive. You don't even need to have tremendous power when fighting. You can possess a little of it all and be calm, confident and collected. If you know you will win and that comes off you and onto your opponent, you will find that even the better athletes and fighters can be weak minded.

And if you lose mentally, you almost always lose physically.

Agree or disagree? Tell me what you guys think of intimidation Maniacs!!