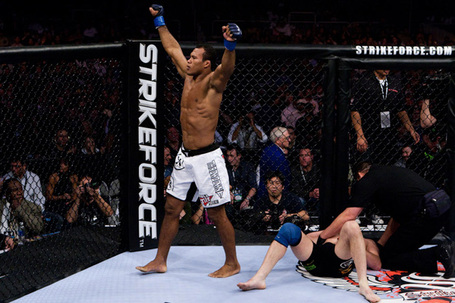 The co-main event of Strikeforce: "Diaz vs. Cyborg" featured the classic and cliched "striker vs. grappler" fight.

Score one more for the grappler, as Ronaldo "Jacare" Souza defended his middleweight title with a third round rear-naked choke victory over the hard-hitting Robbie Lawler.

It started fast, with Souza earning a takedown and working his considerable skills on the mat. But Lawler proved to be a game opponent, at least initially, as he avoided a guillotine attempt and kept the fight where he wanted it to be:

Not only that, Lawler landed a few good shots that dropped the champion, getting the live crowd cheering in anticipation of a potential title change.

After earning that lone knockdown, Lawler made the mistake of following the Brazilian jiu-jitsu specialist to the ground. He ended up in his guard and was never able to capitalize on his good fortune.

Souza even got back to his feet and executed a few takedowns before the round was out.

The second frame was an exercise in dominance and control, as "Jacare" simply outclassed Lawler for the duration of the round. He nearly ended the fight with two swiftly applied armbars. However, "Ruthless" showed again that he wasn't going to be so easy to finish.

Unfortunately for the H.I.T. Squad fighter, he was no match for the relentless pressure that Souza was able to apply and the third round saw the end, as "Jacare" locked in the fight ending rear-naked choke.

Who's next for the titleholder? Can anyone match his outstanding mat game?