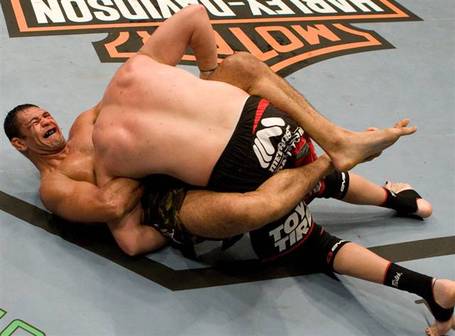 When the French invented the guillotine, one of the most feared and popular killing devices in the world during the French Revolution, they probably had no idea that one of the most devastating submissions in mixed martial arts would be named after it.

A guillotine focuses around a single arm choking the throat of the opponent. Just like many of the submissions already discussed, this choke requires multiple set-ups and positions to execute. I will be focusing on what I feel is the most effective (as well as my favorite) technique for the submission.

The guillotine choke has long been a death sentence for wrestlers that would shoot in on a submission specialist. It is one of the most common chokes since it's possible to grab the choke from about any position you find yourself in during a mixed martial arts fight.

So from a unconventional choke and rarely seen choke like the Anaconda Choke to a much more familiar and often seen choke, we continue our look into the submissions of MMA.

Technique and notable usages after the jump: 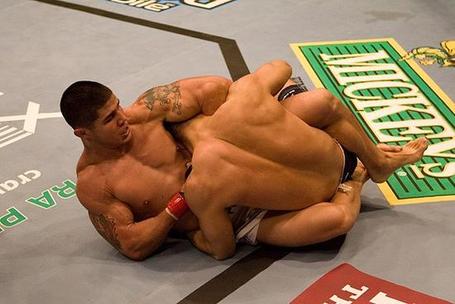 The guillotine is a choke favorable against wrestlers because it punishes your opponent if they shoot in for a takedown with their head down. While there are other ways to complete the choke, this is often the most common. The most basic way to describe the choke is when you reach around your opponent’s neck when it is in range, grasp the choking side hand with the free hand and lift up.

You can complete the choke from a number of positions including the mount, full guard, the sprawl position and even standing up. The choke itself can actually be either a blood choke or an air choke depending on how you are placed onto your opponent’s neck. If your forearm pressure is putting force into the wind pipes it will be an air choke and if it is placed more on the arteries you have a blood choke.

Regardless, the guillotine will usually force your opponent quickly into unconsciousness if s/he doesn’t tap.

When executed from the ground, you will focus a lot on controlling your opponent with your hips and for our purposes now by using a closed guard. The closed guard will prevent your opponent from escaping the choke and gaining position as well as applying additional pressure by extending the hips.

While your opponent is draped in your closed guard, prevent him from assuming good posture by gaining wrist control and breaking them down into a bad posture as close to your chest as possible. Again, I will walk through this as a right handed grappler. One of my favorite set-ups from this position is to focus on your opponent's left hand and get it to the ground beside you. From there, plant both feet on the ground and sit up. Your opponent should react by pulling back or taking his right hand and putting it behind your back.

Now reach up and wrap your right hand up and over your opponent’s neck. When you reach around you want your choking hand to be as tight and close to your stomach as possible while keeping your sit-up posture. With your left free hand, reach under the chin and clasp your hands. Again, Gable Grip would be preferred. Now sit back on the choke and regain closed guard. This will immediately put pressure on the choke and (usually) force your opponent to pull back. Pull your arms towards yourself while pushing away with your hips. At this point you should be close to getting the tap.

Just a little technique I use when falling back on the choke is that I turn towards my opponents head at an angle. For me that has been more successful in creating less space, making it tighter and applying more force. For example, if I am using my right arm I want to explode with my hips and pull up and to the right. Another technique I like when I catch the guillotine coming in off a takedown is falling into half guard and immediately throwing my free leg up and over my opponent’s back. Your leg will look similar to the free leg in the Peruvian Neck Tie choke.

You should also note that this is a "No Arm" guillotine which basically means your opponent's arms did not force you to reach through the arm pit to secure the choke. While some fighters find a lot of success with "Arm In" guillotines, this variation works best without the arm. "Arm In" chokes are still possible to finish, just a little more difficult. Instead of extending your hips basically trying to stretch out your opponent's neck, it is better to stay tight to their shoulders and squeeze with your arms, pulling your opponent's head into your chest to finish the choke. Guys like Joe Stevenson and Dan Miller are notorious for their "arm in" guillotine chokes. 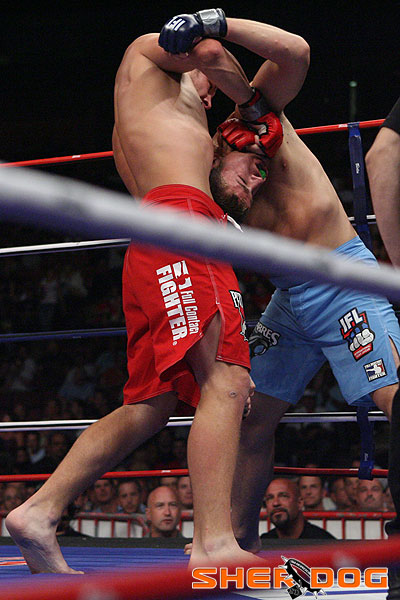 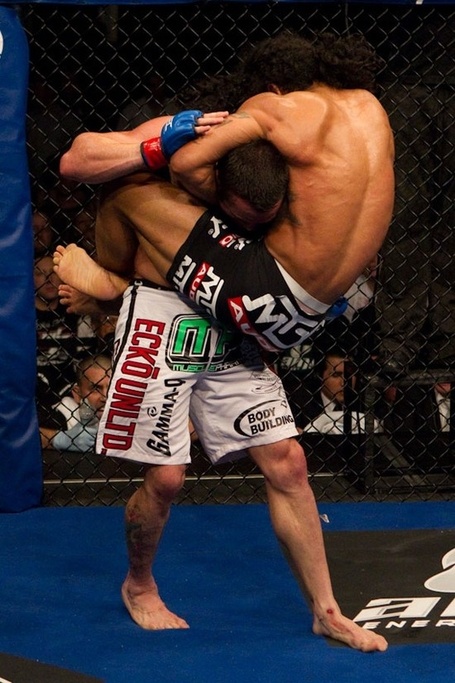 Standing Guillotines work just as effectively. You would be best suited to grab the choke with your more dominant arm. If you are lucky enough, both of your arms are equally dominant. With the standing guillotine you are more susceptible to being driven back and losing balance so instead of reaching down for the choke and clasping the hands I like to clasp my wrist until I know my base is stable and I am on balance. Then when I know I am, I go ahead and latch my hands together.

From there you can do one of two things: You can keep the choke standing and use good posture to lift up and pull towards yourself. This will be especially successful if you have long limbs or a height advantage. Make sure you are using more leverage then arm power to prevent yourself from gassing out your arms. If you are in a cage it would be ideal to push your opponent into the cage with the choke putting pressure and forcing more momentum into the choke as his body will have no where to go and will be pushed towards your body. If you are along the fence get enough separation to arch your back and push out your hips.

The other option is jumping into your guard with the choke. Of course you want to make sure you have a very good hold on the choke or the momentum and impact may separate your hands leaving you in a less dominant position. This also holds true if you are picked up and slammed with the choke. If you make it down, immediately gain full guard and close it up. Just as above when we went over the choke from the ground, pull up towards your head and explode out with your hips.

Very good jiu-jitsu players in tournaments will use arm drags into guillotines then immediately into guard pulling. It can be so fast you won’t have many options to defend. 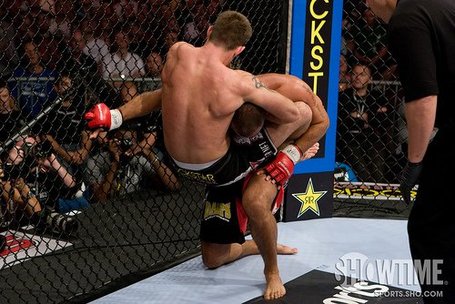 So you made a mistake and you are stuck in the guillotine. What do you do?

You stay calm first and foremost. Do not tighten up, instead relax and be loose. If you do this the choke will work slower. Panicking only leads to more breathing and tighter positions. Start defending by throwing your arm opposite of the side your head is trapped on over your opponent's shoulder. Doesn’t seem like much but give me a second to explain.

Pull your leg over your opponent’s leg that you just dug your elbow into and free your other leg by sliding it out. Now rotate your hips to the side of your opponent’s body that is opposite your head. This should allow you to escape the choke.

Again, these are just a few of several techniques on completing and escaping the choke. If you have any variations or favorites please feel free to leave them in the comment section.

Notable usages of the guillotine choke:

Staying true to the meaning of the word, Dan Miller is seen in this GIF removing someone’s head. Needless to say he was awarded the victory but not before he gives us this very nasty image to stare at. Miller has a "no arm" guillotine and has it firmly planted on his chest which allows the angle of the choke. He uses his leverage and body to push the head down and apply pressure around the throat. He also uses the ropes to his advantage not allowing any sort of forward momentum trapping the head at the violent angle.

Immediately in the GIF, Robbie is pushing Shields into the cage. As he does he leaves his head on the outside of Shields, already in his armpit begging to be choked. Shields obliges and immediately grabs the choke and drops down into closed guard. Lawler knows he is caught, doesn’t seem to relax at all and immediately attempts to pick Shields up off the ground to loosen the choke. Unfortunately for Lawler, Shields is top heavy which cranks down the neck even more as he lifts up and as he tries to posture up the choke hits him full force, he falls and then taps out. Also, Shields has sunk in a "arm in" guillotine due to the over hook he already has when Lawler pushes him up against the fence.

Henderson has a sprawl working on Cerrone early on. He immediately latches in the "no arm" guillotine and falls back. Instead of closing his guard up he executes one of my favorite techniques. He buries his foot nearest the choke inside almost as if it were a butterfly hook and swings the outside leg on top of Cerrone’s back. This changes the angle and pressure of the choke from its conventional way of locking the closed guard. Cerrone tries to fight it but Henderson has all leverage and a tight grasp.

Joe Stevenson muscles through the choke vs Gleison Tibau:

When you have a massive upper body and crushing brute strength it would only make sense you would have pretty good guillotines. Add that you are well versed in grappling and have very effective hip movement and you have Joe Stevenson. Tibau rushes in and leaves his head on the outside of a takedown attempt. Joe latches on quickly while showing tremendous balance and sits down on the choke. He hardly uses his hips other then to balance Tibau inside his guard. He doesn’t lock up his guard either. This choke is almost solely upper body as he pulls up and back on Tibau’s neck.

As always, comments and examples are encouraged. Anyone have anything to add from personal experience?

Until next time Maniacs...