Share All sharing options for: IGF: Kimbo Slice vs Shinichi Suzukawa booked for Feb. 5 in Fukuoka 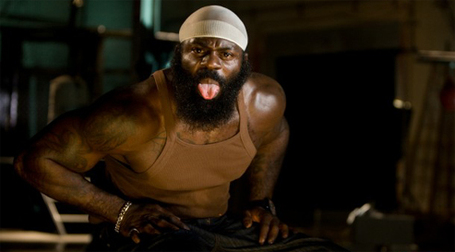 Kimbo Slice has resurfaced yet again, apparently agreeing to a pro wrestling match against former Sumo pothead Shinichi "Wakakirin" Suzukawa for the Inoki Genome Federation on Feb. 5 in Fukuoka, Japan, according to FightOpinion.com.

Slice (real name Kevin Ferguson) -- who rose to fame and fortune as a bareknuckle brawler on the streets of Miami -- was fired from the Ultimate Fighting Championship (UFC) last May after his first official loss inside the Octagon.

The former EliteXC star made his way into the UFC the only way Dana White would let him -- as a contestant on The Ultimate Fighter (TUF) 10 reality show. Unfortunately the former YouTube sensation was an early victim to Roy Nelson's belly-to-beard crucifix and was eliminated from the competition in episode three.

Nevertheless, he was given a second chance at UFC stardom (and an opportunity to pad the numbers for key demographics at the TUF 10 Finale) when he squared off against Houston Alexander in a fight that saw "The Assassin" play ring-around-the-rosy for three rounds with Slice in pursuit.

After huffing and puffing his way to a unanimous decision win, Ferguson was again paired up with another TUF 10 contestant when the promotion booked him to throw hands against Matt Mitrione at UFC 113 in Montreal.

"Meathead" finished Slice in the second round, sending him back to the unemployment line and perhaps out of the sport of mixed martial arts for good.

Now Kimbo gets to dabble in the wild and wacky world of Japanese pro wrestling, which this writer will assume has put his rumored boxing career on hold for the time being.