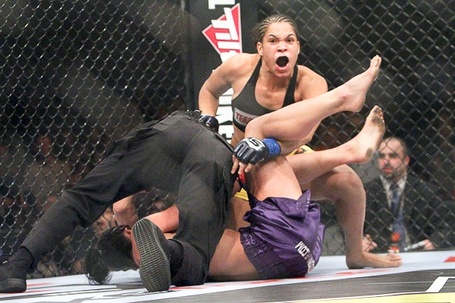 Last Friday night (Jan. 7) Amanda Nunes (6-1) went toe-to-toe with Julia Budd (1-1) for Strikeforce Challengers 13. The bout lasted a grand total of 14 seconds after "The Lioness of the Ring" dropped Budd and delivered a series of hammerfists to seal the deal.

Nunes told MMAmania.com that she has her boxing coach to thank for her vicious stand-up.

"I give all the credit to my stand-up coach Gilmar Reis. He is a great boxing coach in Bahia, Brazil. He taught me all of my striking."

Nunes may have climbed even higher in the women's 145-pound division with her knockout victory, but she says she doesn't fight for rankings, she fights for the fans.

"It's very good and it makes me proud. It just lets me know that I'm getting closer to my ultimate goal, which is to be number one in the world, but it has no affect on how I fight in the cage. I fight to give the crowd a show."

With all of her wins coming via knockout, Nunes is certainly a crowd pleaser.

Nunes never rushed into the world of mixed martial arts (MMA). "The Lioness of the Cage" explains how she slowly made her way into the combat sport.

"Training MMA was a progression. I started training boxing at 17 years old just to have fun and to release some energy. A year later my older sister brought me to the jiu-jitsu dojo where she trained. I trained jiu-jitsu for a year before I started putting the both together and decided that I wanted to fight MMA. I had my first pro fight at 19 years old."

The MMA debut for Nunes didn't go exactly according to plan. While Nunes was able to drop Ana Marie, she got caught in an armbar and was forced to tap out. The Brazilian brawler says the loss helped her grow as a fighter.

"I was happy and excited to fight. I had made a commitment to fighting and I was happy to finally get in there. After the loss I felt like I needed more experience and I needed to control my aggressiveness. I knocked her down in the first 10 seconds and I went right into her guard to finish the fight and got armbarred. She was a brown belt and I was a white belt so I knew I needed to train harder. I never thought twice about fighting because it is something I love and I knew I just made a rookie mistake, but I always am confident about myself and my skills."

After losing in her MMA debut in just 35 seconds, Nunes knew she had to make some changes. She says there were two key issues that needed to be addressed.

"My dedication and discipline. After the loss I realized that I would have to give my life to this sport if I was going to be the best. As far as game plan I realized that I can't have uncontrolled aggression. My style will always be aggressive but after my first fight I realized I have to fight smarter."

On Jan. 7 not only did Nunes make her Strikeforce debut, but it was also her first time fighting in the United States. Despite all of this, Nunes says pressure was nonexistent.

"I was so focused on the fight that I didn't feel the pressure. I felt the presence of all my family and friends in Brazil watching me."

When the bell sounded to start her bout with Budd, Nunes came in like a berserker. While the strategy can be very risky, it worked like a charm for Nunes.

"My coach Gilmar called from Brazil before I left the hotel and he told me to go straight at her and put the pressure on her with right hands and followed it with my left. I did exactly what he told me and it worked. My coaches in New Jersey also watched some of Julia's Muay Thai fights and they felt like she had trouble fighting backing up. Our gameplan worked to perfection."

The knockout win stole the show from Strikeforce Challengers 13 and was the most watched bout of the event. Nunes believes this could mean big things for her career.

"I feel like it was such blessing. I think something like this can help me with my career when it comes to getting bigger sponsors and more promotion from Strikeforce and Showtime."

While the aggressive style Nunes displayed in the fight was exciting, she understands that improving in all aspects of MMA is vital.

"I just react to what is in front of me and I just go for it. I train much more laid back during training camp because you can't keep going 100% the whole camp or you will get injured. Now that I'm training in America, I have been training like a professional, eating right, and doing all the correct things to make me the best in the world."

Nunes is on the fast track to a world title, but she knows she's not quite there yet.

"I feel like I'm 2-3 fights away. I need to bulk up to become a true 145lber which my strength coach feels like it can be done in about a year."

"The Lioness of the Ring" is a human wrecking ball, so it comes as no surprise how she got the nickname.

"My Sensei Ricardo Carvalho gave it to me. He says the name matches my fighting style."

MMA fans got a chance to see who Nunes is in the cage, but outside of the cage she is a different person.

"I am a very friendly and outgoing person. I like to laugh and have a good time with my friends. I love to spend time with my family and more then anything I am close to God."

Nunes took the time to thank the ones who help her on the road to MMA success.

"I would like to thank my striking coach Gilmar, my jiu-jitsu coach Ricardo and Edson Carvalho, My strength and conditioning coach Angelo Todero. My manager Chris Vender, my family, training partners and most important, God."