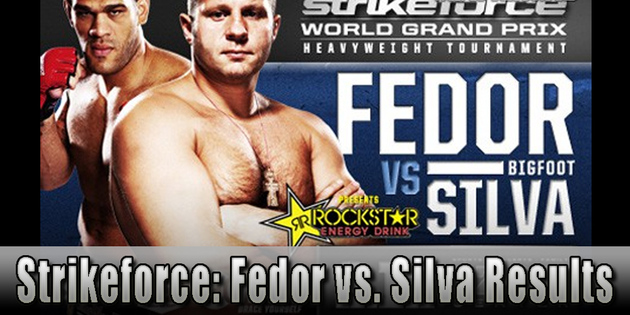 Also trying to advance to the tournament semifinals will be former UFC Heavyweight Champion Andrei Arlovski when he throws hands with hard-hitting Russian striker Sergei Kharitonov.

Without further delay, see below for the latest Strikeforce: "Fedor vs. Silva" results. (Note: This will go from the bottom up; therefore, scroll toward the bottom for the latest detailed round-by-round action):

STRIKEFORCE: "FEDOR VS. SILVA" LIVE PLAY-BY-PLAY AND MAIN CARD COMMENTARY:
Nostradumbass in da howse. Nostradumbass is having internet issues at the arena so your stuck with Geno on the play-by-play for the night.

Round one: Time for the main event. Fedor doesn't even look at Bigfoot in the staredown. And he's officially back. Silva throws a kick. Fedor comes in with the Sambo style shots. Silva lands a few good counter punches as Fedor jumps in on him. Fedor lands a straight right but Silva clinches up and drives him against the cage. Crowd starts chanting for the Russian. Big Dan wastes no time in separating them. Silva is doing what he can to clinch though after the reset. Fedor landing a few wild shots. Push kick from Silva and he uses it to clinch up again. Bigfoot actually landing punches and he ducks under grabbing a leg. The fans are getting excited as Fedor grabs a guillotine. Silva tries a takedown but ends up on his back. Fedor jumps in and he's in half guard. He sits up and starts landing a few punches but jumps out. He comes back down and half guard again. He's landing a few shots though. He grabs his arm but can't hang on. Silva pushes forward with punches after they get back up and they're clinched up against the cage again. Fedor is bleeding from the nose now. Silva pushes back and they both exchange big punches. Silva gets the takedown with ten seconds left but nothing happens before the horn. Close round but I'll give it to Fedor 10-9.

Round two: They come out quick and Silva shoots underneath a right hand and gets an easy takedown. Half guard for Bigfoot. He postures up and starts landing punches while Fedor tries to scoot his hips. Fedor is holding on but Silva passes to side control. Now he's in north south and back to side control. Full mount now for Silva. Fedor turns over and Bigfoot has his back. Fedor turns again and it's back in full mount. Silva landing bombs and once again Fedor rolls. He's looking for the rear naked choke but another turn to full mount. Fedor defending well here. He turns once more and Silva lands a few more punches. The ref is about to stop it but Fedor turns. Silva has been landing big shots for a few mintues now. He's got the arm triangle locked in. He's trying to turn it now and he's got it in. Fedor is about to go out. Still a minute and a half left. Fedor gets out of it though. WOW. Half guard again for Silva. Fedor throwing punches from the bottom and I'm shocked. Amazing. One minute left in the second. This is a 10-8 round so far. Silva might be gassed. He turns over and has the kneebar. Silva has his leg and now Fedor grabs a leglock and Silva lets the leg go. Holy shit. Silva motions that he's okay and the horn sounds. What a round. 10-8 Silva.

Fedor's eye is completely swollen shut and the referee waves it off. The fight is over and Fedor has lost two in a row now. The crowd is booing like crazy.

Round one: And now it's time to see if the "The Pitbull" has any bite left. Too easy? Okay, let me try again. And now it's time to see if Arlovski's beard will provide the padding necessary to protect his chin. Went too far? Alright, I'm done. The Strikeforce Heavyweight Tournament is officially underway. Great staredown, at least. Crowd has come alive. Arlovski opens with a kick. And another. Lands another with a punch behind it. Sergei has him backed up though and Andrei clinches to avoid it. Some dirty boxing. Arlovski is bouncing around quite a bit but Sergei is stalking him. More dirty boxing. Sergei lands a few and Arlvoski is on the ropes. A big left and down goes Andrei. Wow. A few big punches after he goes down and Arlovski is out cold. I'm talking scary knockout. Arlovski looks dead. He sits up and the lights are on but nobody is home. Kharitonov advances.

Round one: Underway and Lavar with a big right hand that misses because of a kick from Shane. They clinch up now. Lavar gets the trip takedown. Del Rosario has full guard. It's open though. He's throwing his legs over and just like that, he gets back up. Head kick just misses and they clinch up again. Lavar lands a knee. Shane lands a few punches and he's pushing forward but they clinch once again. They start exchanging a bit before another clinch but this time Del Rosario gets the takedown and he's in full mount within about two seconds. Lavar is holding on for dear life and Shane is doing nothing. He starts reigning down punches now but Johnson is surviving. Lavar is eating shots but nothing too big so far. Lavar almost escaped but Del Rosario put the kibosh on that. He turns over for the armbar and he got it. After over a minute of doing no damage with punches in full mount, Shane took the arm, that Lavar was totally leaving out there, and got the sub.

Round one: Low leg kick from Overeem to start the action. Answered in kind by Sefo. Left hook misses. Head kick from Overeem misses. Sefo comes in and Overeem covers up. Push kick from Overeem looked like it might land in the face. Cue Mauro talking about Vitor being in the house. Poor Belfort. Overeem shoots on Sefo and gets the takedown up against the cage. Wow. He put on a neck crank and Sefo tapped in a hurry. That was James Toney level ground work.

Round one: Chad Griggs looks really happy to be here. Yves Lavigne in charge for this one. The old touch of the gloves. Griggs rushes in but gets clipped with an uppercut. Villante lands a body kick. They're both really getting in there and exchanging punches. Some dirty boxing early. Griggs lands a few and Villante is wobbled but he's okay. At least, okay enough to clinch up and push Griggs up against the cage. Another couple of shots from Griggs and these two are just throwing bombs at each other. Crowd is just dead though. Come on Jesse, get your shit together. Griggs is throwing the kitchen sink at Villante. Wow, Villante lands a head kick. Lavigne stops it to get the mouthpiece of Villante back in. They reset and Griggs is landing big time on Villante and he drops him twice. After the second knockdown he lands enough shots on the ground for Yves to step in and stop it. He was unloading on Villante.