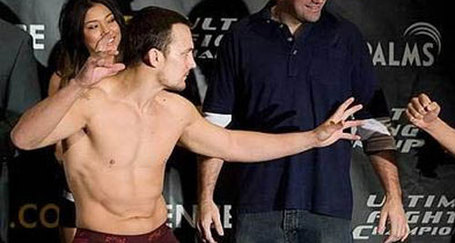 In one of the most astonishing turn of events in the history of the Maximum Fighting Championship, MFC Owner/President Mark Pavelich announced that the organization has signed world-ranked lightweight Drew "Night Rider" Fickett to a multi-fight contract.

Pavelich and Fickett were involved in a heated feud back in 2008 when the fighter had initially agreed to compete in the Maximum Fighting Championship. When Fickett ultimately did not fight, a massive controversy erupted that created a huge stir in the mixed martial arts world.

But now the buzz will be all about one of the hottest 155-pounders in rankings coming on board with the MFC.

"My biggest thing is that everyone deserves a second chance and everyone deserves forgiveness," stated Fickett. "Mark and I had a quarrel but everything has been forgiven and I appreciate that he is giving me a shot.

"He called me with this opportunity even after we had such a big dispute. To me, that's just beautiful ... it's just awesome. I think Mark and I are now able to sit back and have a beer and laugh about all that past stuff."

Fickett has turned over a new leaf. Re-incarnated and re-energized. Re-invigorated and re-focused. It has clearly had a profound effect on his personality.

"I've got a lot of love for a lot of people," reflected Fickett, who turned 31 on Christmas Eve. "I'm really grateful for the people who are around me. I've got my daughter. I've got people who care about me. I've got a good girlfriend who supports me.

"I'm surrounded by good people and I'm away from the BS and the partying. It's made me want to fight."

And Fickett has fought with a great deal success since his turnaround following a disastrous 2009. In 2010, the Tucson , Arizona , product's re-generation resulted in a four-fight winning streak that he will carry into his MFC debut. Two of those wins came over former MFC title contenders Derrick Noble and Carlo Prater, which added to Fickett's impressive list of career victories.

Over the course of his 12-year run, Fickett has scored wins over such notables as Kenny Florian, Josh Koscheck, Josh Neer, Dennis Hallman, Kurt Pellegrino, Fabio Holanda, Charles Bennett, and Edwin Dewees. Taking a page out of what got him to those victories and erasing the nasty skid of '09, Fickett has rebounded in fine style.

"No one can beat me now," touted Fickett, who holds 29 career wins via submission. "Mentally I burned out and I didn't really want to fight. Now I have a renewed passion for the sport and I have a re-invigorated spirit.

"I'm going to choke people out and people are going to get hurt. I'm coming to the MFC and I'm going to win the belt. It's going to be awesome."