Jose Aldo: Don't write what Chael Sonnen says, 'he speaks so much junk'

Share All sharing options for: Jose Aldo: Don't write what Chael Sonnen says, 'he speaks so much junk' 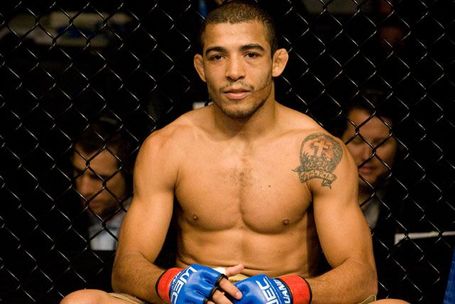 "Coming from Sonnen... he is a clown who speaks so much junk. Speaks things that he couldn't and doesn't know. If he says it in front of an amazonense (native from Amazonas) it can create a problem. Blood boils. Wanderlei already answered. I already was with Sonnen. He speaks for self-promotion but this is going beyond the point. This is bad for his image and damages our image. There (in the U.S.) they think there are only Indians and alligators in the streets [of Amazonia] but it is changing. You can't write what Sonnen says. Let him speak [expletive]..."

In case you aren't on Twitter, middleweight loud mouth Chael Sonnen tends to use the social medium as his own personal sounding board for trash talk on whomever his venom is directed at for that particular moment. In this instance, Wanderlei Silva is the lucky recipient. In a tweet last week, Sonnen made the comment that "The Axe Murderer" is "lucky your brother Joe's the matchmaker or you'd be sellin barbecued monkey on the street in Manaus." UFC Featherweight Champion Jose Aldo is none too pleased with these remarks and believes the media should stop writing about the "clown that speaks so much junk." Well, Maniacs -- should we?